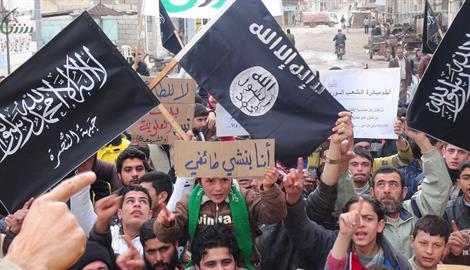 The rapid rise of the Islamic State of Iraq and Syria (ISIS) has exposed clear fault-lines in the Arab world, not least the failure of Arab intellectuals to stand up and be counted in the face of autocracy and fascism spreading across the region.
Religious scholars believe their mission now is to reveal the true intentions and dangers of ISIS, as a party that is using Islam to recruit people, especially the youth, to carry out its nefarious agenda. The Council of Senior Scholars in Saudi Arabia has done the right thing by labeling ISIS a criminal and terrorist movement.
Religious scholars are on the mark, but what about intellectuals? Despite the dire need for more thinkers to join the conversation, their voices are barely heard. They have lost their audience, leaving many confused.
“The thinking that groups in the East and West are conspiring against Islam and Arab civilization satisfies the most narcissistic of people’s fantasies”
Mohammed Fahad al-Harthi
The educated elites across the region are showing that they are fickle, changing their positions depending on their own interests, or as power structures shift.
Religious response
The ISIS phenomenon requires a response on religious and ideological levels. It is also clear that there is a certain immaturity in a society that does not have the capacity to reject illogical and irrational acts.
The media in this part of the world is also geared up to empower authoritarianism by justifying and condoning the behavior of those who have political and economic power.
Arab intellectuals are failing to counter this sycophancy and inertia by offering a rational and modern ideological framework that can be used as a rallying point for people. This has resulted in the growth of extremism, ignorance and sectarian wars.
The Arab world also suffers from another illness — the love of the conspiracy theory. Instead of self-reflection and acknowledgement of mistakes, many opt to take the easier road and blame others for their problems.
The thinking that groups in the East and West are conspiring against Islam and Arab civilization satisfies the most narcissistic of people’s fantasies. Unfortunately, this thought process has resulted in the younger generation holding grudges and desiring to fight rather than seeking dialogue. This fuels hate, violence and extremism.
We face a similar problem with writers who attempt to polish the image of a political leader by framing him as a nation’s only savior. We see this clearly among intellectuals in Syria who still applaud President Bashar Assad despite his role in killing over 250,000 of his people.
They even dare to say that the sacrifice was necessary in this war as if people can’t tell right from wrong. Fighting to give legitimacy to the regime, some intellectuals indirectly justify the killing and displacement of thousands of people.
The only way for these people to have some recognition is by appeasing the ruling authorities. They are the cheerleaders often seen in the front-row seats making the most noise. They are contributing to diminishing the role of people who are honest and have integrity.
False glory
However, the leaders who bask in this false glory eventually discover they have believed their own propaganda. By this time it is too late and they are headed either for a prison cell or forced to flee.
It can be stated quite unequivocally that Arab intellectuals have played a major role in creating the current political situation in the Arab world. Consider, as an example, the decision of the French writer Jean-Paul Sartre to write his famous book, Shame in Algeria, exposing the role of his country in torturing Algerians. Sartre prioritized morality over material benefits and fake popularity.
It is safe to say that our mistakes have not been solely caused by dictatorial regimes. Intellectuals here have failed to speak up and thus allowed the barbarous ISIS to exploit this vacuum and continue to recruit naive and reckless people. Our intellectuals may want to rethink their position because they may be as culpable as those out there shedding blood on the battlefield.