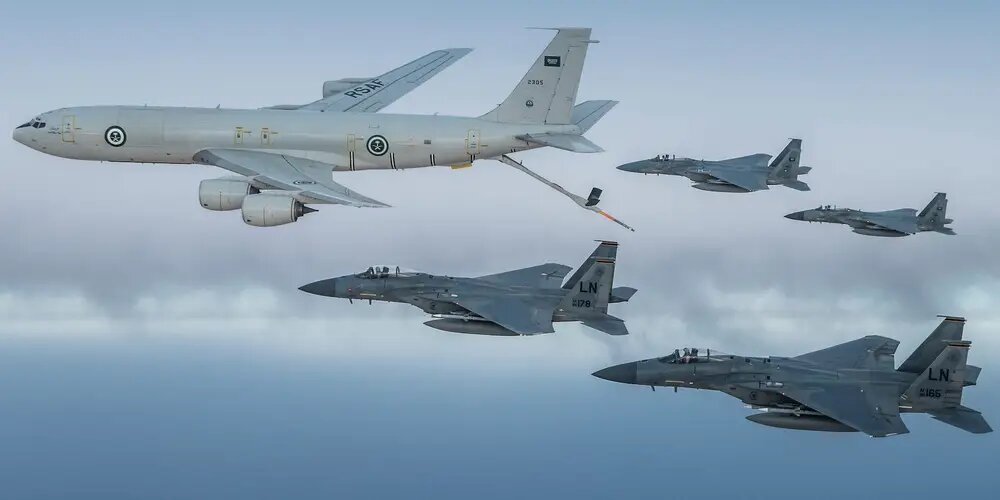 Despite Biden’s assurances, Middle East militaries are buying their own weapons to take on Iran at sea and in the air

Iran’s military moves in recent weeks have captured worldwide attention, stoking concern among rivals in the US and across the Middle East.

On September 1, Iran’s navy briefly seized two US Navy unmanned surface vessels in the Red Sea, succeeding on its second attempt capture a US drone within a week.

Those actions come amid a longer-term military buildup by Iran’s neighbors, who seek to counter Tehran’s asymmetric capabilities by improving their air and naval forces. Their buildup has continued despite President Joe Biden’s efforts to assure them of US support and improve relations in the face of increasing geopolitical competition.

Saudi Arabia’s and the UAE’s vast oil wealth has allowed them to be the top two defense spenders in the Middle East and North Africa, and their relations with the US and Europe give them access to the best combat aircraft on the market.

Saudi Arabia is upgrading its F-15s, and in November, the US State Department approved the sale of 280 AIM-120C air-to-air missiles for $650 million to Riyadh.

Saudi aircraft continue to play a major role in Riyadh’s campaign in Yemen. Their operations have kept Houthi forces from taking important territory and prevented Houthi drones and missiles from striking Saudi Arabia, but Saudi airstrikes, often conducted with US support, continue to kill civilians.

The UAE’s air fleet is smaller but also powerful, made up of 78 F-16s and 49 Mirage 2000s used for both fighter and ground-attack operations.

Over the past year, the UAE has said it would purchase 80 French-made Dassault Rafales and 12 Chinese-made Hongdu L-15 jet trainers, with an option for 36 more. The UAE is also reportedly in talks with Turkish firm Baykar for 120 Bayraktar TB2 drones.

Both navies plan to expand and modernize.

In 2017, Riyadh signed a contract with Lockheed Martin for four multi-mission surface combatant warships, a variant of the US Navy’s Freedom-class littoral combat ship. The Saudis have also received two of the five Spanish-built Al Jubail-class corvettes they ordered in 2018. The final three are expected to be delivered by 2024. The Kingdom has also ordered 39 HSI32 Interceptor vessels from French shipbuilder CMN Group.

The UAE, meanwhile, ordered two Gowind 2500-class corvettes from France’s Marine Group in 2019. The first corvette was launched in December and the second in May.

In addition to securing their own waters, the Saudi and Emirati navies have both sent vessels to support a blockade of Yemen.

Despite showing off its new warships and announcing plans to buy more fighter jets, Tehran has recalibrated its defense structure in recent years.

“Ten years ago, you could see the Iranians were still thinking in a somewhat conventional way about doing things,” said Michael Knights, an expert in the military and security affairs of Persian Gulf countries at The Washington Institute for Near East Policy.

Handicapped by sanctions and a limited industrial base, Iran has mostly been unable to build and field advanced military hardware. It has shifted from trying to match the conventional capabilities of its adversaries to focusing on things like missile and drone development.

Iran’s missile arsenal is the largest in the Middle East and quite capable, as is its drone fleet.

Hundreds of missile and drone attacks using Iranian-made hardware have been launched against Saudi Arabia and UAE from Yemen and Iran since 2015. In January 2020, Iran launched more than a dozen ballistic missiles at US military bases in Iraq following the US’s assassination of Iranian Maj. Gen. Qassem Soleimani.

Iran has been supplying drones to Moscow as the Russian military struggles in Ukraine. In mid-September, Ukraine said it had for the first time destroyed an Iranian drone in use by Russian forces.

But the advanced weapons now fielded by Iran and its neighbors, along with the tight confines of the Gulf region, mean that any conflict would see heavy losses on both sides.

“The Gulf states and the Iranians would probably be able to do each other a lot of damage very early in a war. Both sides would lose their navies very quickly,” Knights said.

Consequently, Saudi Arabia and the UAE have been putting more emphasis on developing anti-air and missile-defense systems. Both are also investing in unmanned systems.

The two countries are working to integrate and network their drones and systems with each other, which the US has supported, and have participated in or hosted multiple military exercises involving drones, including this year’s US-led International Maritime Exercise, the largest exercise of unmanned systems in the world.

IMX 2022 was also the first time Israel and Saudi Arabia, which don’t have diplomatic relations, officially took part in an exercise together.

The Saudis and the UAE have turned to their burgeoning defense industries to build that weaponry, but the Biden administration — which froze arms sales to Saudi Arabia upon entering office over human-rights concerns related to the war in Yemen — now seems open to replenishing Saudi and Emirati arsenals as part of its efforts to improve relations.

Just weeks after his visit to the Middle East in July 2021, Biden approved a $5 billion arms sale that included up to 300 Patriot missile interceptors for Saudi Arabia and two Terminal High Altitude Area Defense systems with 96 interceptor missiles for the UAE.

Iran is “in a game of mutually assured destruction” with the Gulf Cooperation Council, which includes Saudi Arabia and the UAE, “when it comes to the loss of critical infrastructure,” Knights said.

“But if trends in counter-missile and counter-drone continue moving in the direction they are moving now, the GCC might be better prepared to defend themselves from the Iranians, and that’s an interesting trend break,” he added.

An Iranian ship snatched 2 US Navy drone boats and tried to hide them under a tarp before eventually releasing them overboard: US official