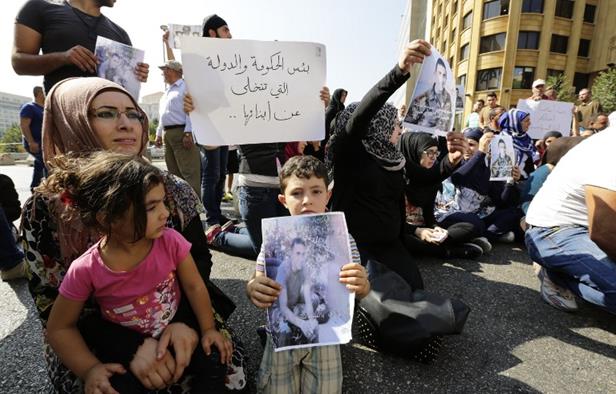 The spectacle of families of the soldiers abducted in Arsal
Michael Young
Published: 10/10/2014
The spectacle of families of the soldiers abducted in Arsal closing roads in recent weeks has been both poignant and disturbing. It has been disturbing because those behind the abductions have been manipulating the families, calling them to warn that their sons will be killed, then asking that they close the roads to raise the pressure on the Lebanese government. From the start of the hostage saga in August, the families have behaved in a rather odd way, reserving their strongest words for the Lebanese government and political class. Even when television stations interviewed the inhabitants of Fnaydeq, in the Akkar region, after the decapitation of Sgt. Ali al-Sayyed, who is from the town, virtually no one condemned the Islamic State that had killed him. Instead, it was the “politicians” who were to blame.
Many negative things can be said about the state and its politicians, but they were not responsible for taking the soldiers and policemen hostage. Nor were the Lebanese in general guilty of such a thing. Yet the escalating reactions of the families and their sympathizers, with their daily cutoff of roads, has only harmed the population at large, while showing the Islamic State and Jabhat al-Nusra that they are capable of creating dissension in Lebanon to achieve their political aims.
At no time was this more evident than when the Islamic State murdered a second soldier, a Shiite by the name of Abbas Medlej. In retaliation, Shiites from the Bekaa Valley began abducting Sunnis, who responded by doing the same. This carried many Lebanese back to the start of the Civil War in 1975. The situation was brought under control, but the jihadists had shown they could heighten sectarian instability in Lebanon. In most countries, the fact that two soldiers, regardless of their sect, were killed by the same knife would unify a population. But such are Sunni-Shiite relations in Lebanon today that precisely the opposite occurred. That is not only dramatic in its implications; it shows how the families and coreligionists of the abducted soldiers are not pausing to think of their actions.
But they might answer that their behavior has forced the government to act. The families believe, probably rightly, that the government is not at all keen to engage in a prisoner swap with the jihadists, who have demanded that Salafists detained at the Roumieh prison be released. The government understandably fears that if it were to concede on this, it would become open season for jihadists to abduct more military and security personnel to secure the release of more prisoners.
Remarks this week by the social affairs minister, Wael Abu Faour, did little to clarify matters. Speaking to the families of the abducted soldiers, Abu Faour stated, “The Lebanese government asserts that it is serious to the utmost about the negotiations in order to bring back the soldiers. We call for a clear and frank swap immediately.”
But then Abu Faour admitted there had been procrastination in the negotiations, though he added that it had not been caused by the government. But he did not clarify to whom he was referring. For the families, who distrust the government, this was likely interpreted as a roundabout confirmation of their suspicions that the government was behind the delay. Abu Faour and his political patron Walid Jumblatt are particularly worried by the fact that several of the soldiers are Druze. They seek a swap, fearing that if the soldiers are killed this may lead to retaliatory actions by Druze in the mountains against Syrian refugees, but also, and most alarmingly, against Sunnis, who make up a third of the population of the Shouf. Further complicating the negotiations is the fact that Hezbollah is keen to secure the release of its prisoners held by the jihadists in any overall deal reached by the Lebanese government. Some have speculated that one political figure in particular has sought to indirectly send messages to Jabhat al-Nusra, warning of the negative consequences if they enter into a wider conflict with the army. While this may be untrue, it was interesting that on Sunday, when jihadists attacked Hezbollah near Britel, the army failed to intervene and itself was not attacked.
As winter nears and the weather in Qalamoun becomes colder, we can probably expect more attacks similar to the one that occurred on Sunday. However, with the battle for Damascus heating up and the Assad regime losing vitally important territory in the south of Syria, it is unlikely that the rebels will want to open a new front in Lebanon. Most of the combatants in Qalamoun are from that area and their focus remains on Syria. Meanwhile, the families of the abducted soldiers and policemen have moved their protest to Riad al-Solh Square. If that means they close fewer roads, all the better. As much as the Lebanese sympathize with their predicament, they don’t see why they have to suffer for the actions of fighters in Syria. Nor do they understand why the families are so willing to be toyed with by the abductors, who are the only ones tormenting them.
**Michael Young is opinion editor of The Daily Star newspaper. He tweets @BeirutCalling