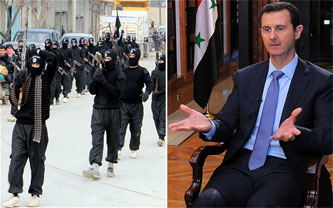 The world has finally come to realize that the complete eradication of the Islamic State of Iraq and Syria (ISIS), al-Nusra Front, Ahrar al-Sham and all other terrorist organizations in Syria, will not be possible without establishing a central authority in Damascus governing all. This means either supporting Bashar al-Assad to regain control over the two thirds of the territories he has lost to the opposition during the last three years of war, or helping the opposition reach Damascus and rule the country. The third option is a comprehensive and shared government without Assad. This would represent a significant evolution in Syria.
British Prime Minister David Cameron’s remarks yesterday are important. Addressing the House of Commons, Cameron said that “a comprehensive Syrian government” is a must to defeat ISIS. It’s very rare for a Western leader to link the war on ISIS with establishing a central authority in Syria. His statement is a clear sign that time has come for Assad to step down, pointing out that cooperation with Iran in this regard is possible.
This solution is similar to the communiqué of the first Geneva conference in June 2012, which called for the formation of a Syrian transitional government formed from regime and opposition officials but without Assad; a proposal that was rejected by most of the opposition forces and of course, by Assad’s regime too. Iran also refused to accept the communiqué as a basis to attend the Geneva II conference. Two years after this international initiative, we believe that it is still the only solution. This initiative can be implemented and would help achieve the minimum level of expectations of different stakeholders, particularly at a time when ISIS has become an international threat. We should not underestimate the threats that ISIS poses, especially after its success in removing rotten apple Nouri al-Maliki from his post as prime minister of Iraq. ISIS could also become the major reason behind getting rid of the stubborn Assad. Eventually, the international demand of having a strong central government to fight ISIS will be achieved.
The Syrian endgame
This flexible approach stems from the new assessment that acknowledges the possibility of failing to defeat ISIS through the alliance that rejects sending troops to the battlefield. So the war will fail to get rid of the largest terrorist grouping in modern history if it only relies on Air jets and Tomahawk missiles. It will only help get rid of a few thousand fighters, while many other thousands will flee and hide underground or in populated neighborhoods.
“The real challenge is how the alliance will be able to triumph over ISIS in Syria through air strikes? ”
Abdulrahman al-Rashed
The real challenge is how the alliance will be able to triumph over ISIS in Syria through air strikes? Due to heavy bombardment, armed hardliners are hiding from radar detectors and splitting into smaller groups across Syria to hide between the people. Targeting them will become very difficult and will pose threats of an attrition war that will continue for years. Terrorism threats will spread across the world.
We have been hearing a lot that most parties believe that both the problem and solution lie in Damascus, stressing on the importance of a strong central government that takes on the mission of fighting these terrorist groups for the coming years. It’s impossible to build a strong central government without toppling Assad first. However, this will not work without the consent of his allies, Iran and Russia.
Most probably, the two allies are afraid that Assad has become an easy target due to the increasing Western support for the opposition. Therefore, the best choice for Iran and Russia is to take part in the establishment of a comprehensive Syrian regime, instead of entirely losing the Syrian game. The proposal of cooperation with Tehran may not last long. The Western governments have already started arming the opposition, supporting them with information, training thousands of recruits, and handing them the responsibility of the areas from which ISIS has been exterminated.