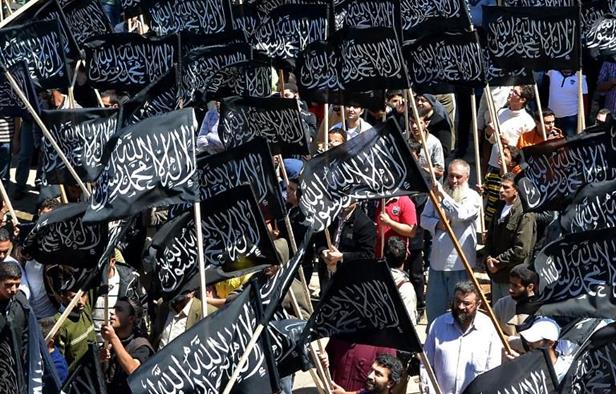 4 ISIS Terrorists Arrested in Texas in Last 36 Hours
by JUDICIAL WATCH /October 9, 2014
Family Security Matters
http://www.familysecuritymatters.org/publications/detail/4-isis-terrorists-arrested-in-texas-in-last-36-hours?f=must_reads
Islamic terrorists have entered the United States through the Mexican border and Homeland Security sources tell Judicial Watch that four have been apprehended in the last 36 hours by federal authorities and the Texas Department of Public Safety in McAllen and Pharr.
JW confirmed this after California Congressman Duncan Hunter, a former Marine Corp Major and member of the House Armed Services Committee, disclosed on national television that at least ten Islamic State of Iraq and Greater Syria (ISIS) fighters have been caught crossing the Mexican border in Texas. The veteran lawmaker got the astounding intel straight from U.S. Customs and Border Protection (CBP), the Homeland Security agency responsible for guarding the 1,933-mile southern border.
“If you really want to protect Americans from ISIS, you secure the southern border,” Hunter proclaimed on a national cable news show this week. “It’s that simple. ISIS doesn’t have a navy, they don’t have an air force, they don’t have nuclear weapons. The only way that ISIS is going to harm Americans is by coming in through the southern border – which they already have.” The three-term congressmen went on: “They aren’t flying B-1 bombers, bombing American cities, but they are going to be bombing American cities coming across from Mexico.”
In late August JW reported that Islamic terrorist groups are operating in the Mexican border city of Ciudad Juarez and planning to attack the United States with car bombs or other vehicle borne improvised explosive devices (VBIED). High-level federal law enforcement, intelligence and other sources confirmed to JW that a warning bulletin for an imminent terrorist attack on the border has been issued. Agents across a number of Homeland Security, Justice and Defense agencies have all been placed on alert and instructed to aggressively work all possible leads and sources concerning this imminent terrorist threat.
Back then intelligence officials said they had picked up radio talk and chatter indicating that the terrorist groups are going to “carry out an attack on the border,” according JW’s sources. “It’s coming very soon,” confirmed a high-level government official who clearly identified the groups planning the plots as “ISIS and Al Qaeda.” Two days after JW’s report ran, Ft. Bliss, the U.S. Army post in El Paso, implemented increased security measures. The Department of Defense (DOD) attributed the move to vague “security assessments” and the constant concern for the safety of military members, families, employees and civilians.
However, military experts told JW that the increase in security indicates that Ft. Bliss is a target. Military installations in the U.S. only make changes to security measures when there are clear and present threats, according to retired Army Lt. Gen. Jerry Boykin, former commander of the Army’s elite Delta Force who also served four years as Deputy Undersecretary of Defense for Intelligence. “That means they’re getting a threat stream. Ft. Bliss had to have a clear and present threat,” Boykin said. Following that news, federal law enforcement sources in El Paso revealed that U.S. Congressman Beto O’Rourke telephoned the area offices of the Federal Bureau of Investigation (FBI), Homeland Security Investigations (HSI) and the U.S. Border Patrol (USBP) in an effort to identify-and evidently intimidate-sources that may have been used by JW to break the ISIS in Juarez story.
Judicial Watch, Inc., a conservative, non-partisan educational foundation, promotes transparency, accountability and integrity in government, politics and the law. Through its educational endeavors, Judicial Watch advocates high standards of ethics and morality in our nation’s public life and seeks to ensure that political and judicial officials do not abuse the powers entrusted to them by the American people. Judicial Watch fulfills its educational mission through litigation, investigations, and public outreach.