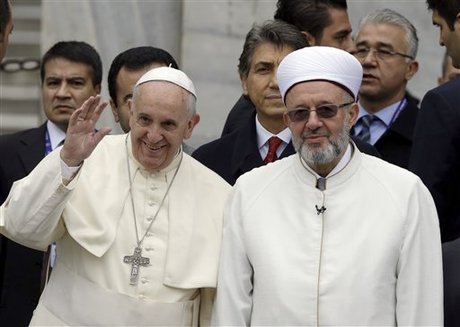 Pope Francis Reflects in Mosque on Symbolic Istanbul Visit
Naharnet /Pope Francis on Friday paused for a moment of contemplation in an Ottoman mosque alongside a top Islamic cleric, as he visited Istanbul on a richly-symbolic trip to the former capital of the Christian Byzantine world. On the second day of his first trip to overwhelmingly Muslim but officially secular Turkey, Francis toured key religious and historical sites in the city once known as Constantinople that was conquered by the Ottoman army in 1453. The visit of the pope is seen as a crucial test of Francis’s ability to build bridges between faiths amid the rampage by Islamic State (IS) jihadists in Iraq and Syria and concerns over the persecution of Christian minorities in the Middle East. The centrepiece of his morning tour was a closely-scrutinised visit to the great Sultan Ahmet mosque — known abroad as the Blue Mosque and one of the great masterpieces of Ottoman architecture. The pope paused for two minutes and clasped his hands in reflection alongside a senior Islamic cleric, a gesture remarkably similar to that of his predecessor Benedict XVI who visited the mosque on the last papal visit to Turkey in 2006.

The pope closed his eyes, clasped his hands in front of his chest beneath the cross he wears around his neck and bowed his head, as he stood next to Istanbul Mufti Rahmi Yaran who performed an Islamic prayer known as the dua.
Like Francis, Benedict had turned towards Mecca in what many saw as a stunning gesture of reconciliation between Islam and Christianity. A Vatican spokesperson described Francis’ gesture as a “silent adoration”, using a term for religious reverence, making clear he did not perform a prayer. He then toured the Hagia Sophia, the great Byzantine church that was turned into a mosque after the conquest of Constantinople but then became a secular museum for all in modern day Turkey. Later in the day the leader of the world’s Roman Catholics will celebrate holy mass at the Catholic Cathedral of the Holy Spirit in Istanbul.

High security, thin crowds –
Amid heavy security, the close contact with crowds that have been such a feature of past trips by the charismatic Francis appears to be absent from the programme here.  Amid the usual hordes of media, just a light sprinkling of believers and well-wishers waved at the pope from behind police barriers as his motorcade drove through the historic centre of Istanbul. “I am not Christian but I came here out of curiosity and respect. At a time of so many conflicts around us we all need messages of peace and tolerance,” said Selime, 70, a Muslim Turk. Three snipers stood on each of the two front minarets of the Hagia Sophia for the pope’s tour. True to his pledges to be a pope who eschews extravagance, the pope was driven in a small Renault Symbol rather than the bulletproof car offered by the presidential palace. The pope will in the evening hold an ecumenical prayer in the Orthodox Church of St. George and a private meeting with Patriarch Bartholomew I, the “first among equals” of the world’s estimated 300 million Orthodox believers.
Francis and Bartholomew — who enjoy warm relations — will seek to narrow the differences between the two Churches that date back to the great schism of 1054. Bartholomew, who welcomed Francis earlier at Istanbul airport, said ahead of the visit that the trip will be “yet another significant step in our positive relations as sister Churches.”

‘Rising Islamophobia’ –
Turkey’s own Christian community is tiny — just 80,000 in a country of some 75 million Muslims — but also extremely mixed, consisting of Armenians, Greek Orthodox, Franco-Levantines, Syriac Orthodox and Chaldeans. Of these only the small Franco-Levantine and Chaldean communities regard the pope as the head of their churches. The pope held talks with Turkish President Recep Tayyip Erdogan in Ankara on the first day of his visit on Friday, calling for dialogue between faiths to end the Islamist extremism plaguing the Middle East. “Inter-religious and inter-cultural dialogue can make an important contribution… so that there will be an end to all forms of fundamentalism and terrorism he said.

Erdogan — who welcomed Pope Francis as the first foreign dignitary to his controversial new presidential palace outside Ankara — for his part issued a strong warning about “seriously and rapidly” rising Islamophobia in the world.
Source