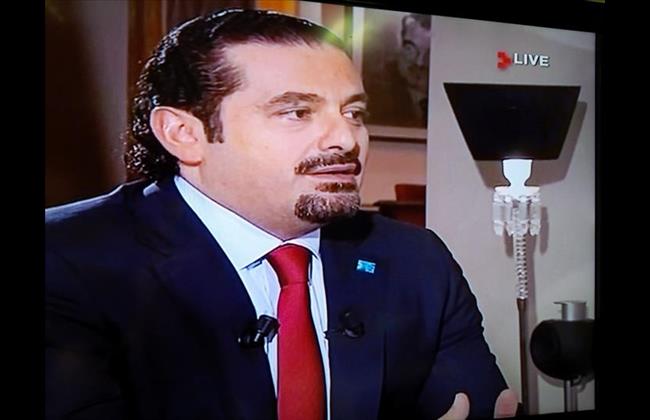 BEIRUT: The election of a consensus candidate is the only solution to end the political deadlock that has left Lebanon without a president for more than six months, former Prime Minister Saad Hariri said Thursday.

Hariri also strongly supported a long-awaited dialogue between his Future Movement and Hezbollah, saying the talks with the influential Shiite party were designed to defuse Sunni-Shiite tensions and shield the country against security threats linked to the war in Syria.

He said Free Patriotic Movement leader MP Michel Aoun could not be elected president because he was opposed by the March 14 coalition, which has nominated Lebanese Forces chief Samir Geagea for the country’s top Christian post.

The head of the Future Movement said he was serious about holding dialogue with Hezbollah to serve Lebanon’s interest.

“Dialogue [with Hezbollah] is important and it should take place. I am serious about dialogue. I am for a serious dialogue in the national interest. I want the election of a president in order for the economy to recover,” Hariri said, adding: “One of the most important reasons for going to dialogue is to contain Sunni-Shiite tensions.”

Hariri cited Hezbollah’s military intervention in Syria, its arsenal, the Special Tribunal for Lebanon which is investigating former Prime Minister Rafik Hariri’s 2005 assassination, and Hezbollah’s arming of the “Resistance Brigades” as key contentious issues with the party.

He said the planned dialogue was not designed to offer a political cover for Hezbollah’s intervention in Syria, adding that the Future Movement’s stance on the conflict in Syria was to support the Syrian people and the opposition.

“We support the Syrians’ struggle for freedom. We are against the regime,” Hariri said. He predicted the eventual downfall of President Bashar Assad’s regime.

Hariri warned that his party could not tolerate a candidate who would maintain relations with Assad, saying that he had lost legitimacy and only remained standing because of support from Iran.

Commenting on an Iranian military gift to the Lebanese Army, which the government has not yet accepted, Hariri said the best gift Iran can give to Lebanon is to tell Hezbollah to withdraw from Syria.

Hariri said Speaker Nabih Berri and MP Walid Jumblatt were working to get the Future-Hezbollah dialogue started. He said efforts were underway to prepare the dialogue agenda. He ruled out a meeting for now between him and Hezbollah leader Sayyed Hasan Nasrallah, saying that dialogue would be attended first by officials from both parties.

“The dialogue [with Hezbollah] would not go into names of possible candidates. It would just stress the need for a consensus candidate,” he added.

The presidency has been stalled due to a boycott of the presidential vote by Aoun’s bloc and the Hezbollah-led March 8 alliance over the lack of a consensus candidate.

Hariri has been living in self-imposed exile between France and Saudi Arabia for more than three years over security concerns. He returned to Lebanon for a brief visit in August after the clashes in the northeast border town of Arsal between the Army and militants, announcing a $1 billion military grant from Saudi Arabia.

It was the second major Saudi grant to Lebanese security forces announced within a few months of each other. In December, then-President Michel Sleiman announced a $3 billion Saudi aid package to the Lebanese Army.

He said the Army and other security institutions would receive 30 military aircraft and acquire the military equipment that was requested.

Hariri added that he returned to Lebanon for a brief stay in August because he was concerned about the security situation, and for reasons related to the Saudi grant, promising to return to Lebanon “very soon.”

Hariri flatly rejected any proposal to coordinate between the Lebanese and Syrian armies amid the rise of jihadi groups like ISIS and the Nusra Front.

“Any coordination should take place with the [Syrian] opposition that rejects ISIS and that also rejects Bashar Assad.”

Asked about October’s north Lebanon clashes between the Army and Islamist militants that killed at least 43 people, including eight civilians and 11 soldiers, Hariri said that the military did well, but could have done better.

He said that he was against any March 14 figure who spoke against the Army. That includes controversial north Lebanon lawmaker Khaled Daher, who has repeatedly denounced Army actions, accusing it of targeting Sunnis.

“Sunni moderation is a part of Lebanese moderation,” Hariri said, arguing that after his father’s assassination, the Sunni community did not resort to terrorism or extremism. “Historically the Sunnis in Lebanon have been the moderates,” the former premier said.