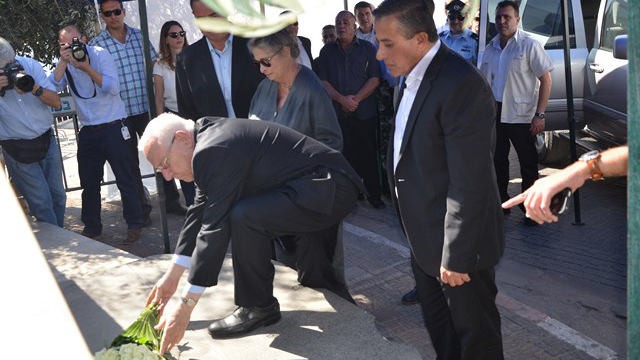 Op-ed: Reuven Rivlin is the first Israeli president who can make Jews and Arabs reach out to each other – not out of love, but because there is no other choice. “We will never act against the principle of equal rights and will never try to force someone from our land,” President Reuven Rivlin said during his historic visit to Kafr Qasim.
Remember the date: October 26, 2014. With a lot of intellect and goodwill and a bit of luck, this may have been the pivotal speech of the official State of Israel ahead of the establishment of a different kind of relations between Jews and Arabs, who are all clinging with their fingernails onto this bleeding, split land that we all call “homeland.”
Here’s a summary of the facts – the ones the official Israel never recognized, and the ones that bothered public officials when they heard that Rivlin was planning to visit Kafr Qasim.
It’s good that he insisted. Because in 1956, while Israel’s Arab citizens were under military rule, Border Guard officers fired at Kafr Qasim residents who wanted to return to their homes during a curfew, massacring 49 unarmed citizens.
This is not the statement of a delusional leftist, but of Israel’s Supreme Court, which convicted some of the shooters and outlined the principle of an illegal order, one which has a black flag hanging over it, one which stems from the sixth commandment: Thou shalt not kill.
This isn’t the first time Israel preferred to deny, hoping that reality would disappear. We have a long and documented history: The refugees? They fled out of their own free will. No one banished them. Arab villages wiped off the face of the earth? Well, that’s the way it is with them. Unusual military activities in the territories? It’s just errant weeds. Sabra and Shatila? That was a long time ago, who can remember. A wholesale violation of human rights? Oh, they started it, they deserve it. Kafr Qana in Lebanon? If you don’t make mistakes, you don’t achieve anything. A disproportional response according to binding principles of the rules of warfare? Everyone is anti-Semitic.
Never has an Israeli president spoken to Arab citizens with the understanding and pain which were evident in Rivlin’s speech. It’s possible that we have never had a president so familiar with the Arab culture, from his intellectual habitat. It’s possible that we have never had a president who was willing to quote Ze’ev Jabotinsky not only when he finds it convenient.
“We will never try to force someone from our land,” Jabotinsky said 80 years ago, and you will never hear that from Likud Knesset Member Miri Regev, or Foreign Minister Avigdor Lieberman, Economy Minister Naftali Bennett, or the small Zeev Elkins, Danny Danons and Yariv Levins who have developed here over the years.
Rivlin himself was decent enough to say that he is stating the obvious, but even the obvious is not at all obvious at times of hatred, with a widening gap between the two people, after years of deprivation and discrimination – whose existence the honorable president finally admitted, loudly and without trying to wriggle out of it – as the violence on both sides is becoming intolerable.
We have the stone-throwers on one side, and the mosque-desecraters on the other; the harassers on the one side, and the olive tree destroyers on the other; the murderers of the three teens on the one side, and those who burned a youth alive on the other; many terrorists whose names we don’t remember on the one side, and Baruch Goldstein, Ami Popper, Jack Teitel, the Jewish Underground, Yigal Amir and more on the other.
Rivlin is the first president who can make both sides reach out to each other, not out of love but – as he reiterated in his decency – because there is no other choice. Because the Arab citizens must accept the principle that this is the Jewish people’s homeland, and Israel’s Jewish citizens must accept the principle that there is a large national minority here who shares this homeland and that no one is going away, and no one should go away.
This state of affairs places responsibility for a partnership on both sides. It’s a pleasure to quote the honorable president bluntly telling his Arab audience that, “As long as there exists any aspiration to eradicate the Jews from this land, there will be no chance of building a true partnership,” and painfully telling his Jewish listeners that “the ambition to live alongside a Zionist Arab minority, which proudly sings the Hatikvah (national anthem), will not and cannot be realized.”
But in order to create this partnership, instead of a shared fate of cemeteries, hospitals and hatred on the streets, we need someone out there to execute the president’s vision. He has to have enough people alongside him and with him who believe in each side’s duty to recognize the other, to play with each other and to learn each other’s songs, language and customs from a very early age, when there is no inherent hatred and racism yet.
In the past two decades, private initiatives of small and local generators of change are almost all we are left with. This has to be a national, binding, documented and budgeted educational program, as important as a national program that has to be created to identify all the budgetary discriminations and immediately fix what can be fixed.
If we – on both sides – want to live, we must thank our honorable president from the bottom of our hearts, and tell him it’s now time for action.
Yalla, come on. And inshallah, God willing, we will succeed.