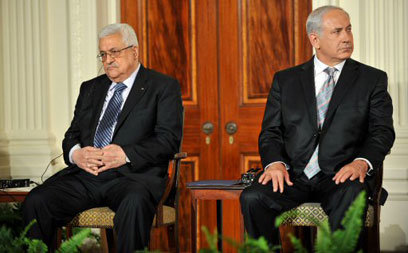 Experienced American diplomat says hostility between Israelis and Palestinians has reached new levels and gaps are deeper than ever. It was a depressing meeting. The man we spoke to, who is one of a handful of American diplomats who have been trying for years to find the golden key to the Israeli-Palestinian conflict, didn’t leave a glimmer of hope. As our conversation extended into the late evening hours, the feeling of an impasse grew stronger. “There seems to be zero chance of reaching any agreement between Israel and the Palestinians right now,” the man summed up his impression from many years of full and partial diplomatic service. “Whose fault is it?” we asked. “It’s your fault, it’s their fault, and it’s our – the Americans’ – fault,” he said. He started off with America: The current administration in the White House has adopted the approach that the Israeli construction in the settlements is the mother of all sins. Factually, that’s incorrect.
Nearly the entire construction, apart from symbolic exceptions, takes place within blocs that will remain under Israel’s sovereignty as part of a land swap.
But the advisors and experts roaming the White House and State Department corridors these days are fixated on the conception of the settlements as the only obstacle to an agreement. They deny reality and avoid dealing in any way with other disputed issues, such as Jerusalem, refugees, normalization and stalemated initiatives.
“Why get in trouble,” he asked ironically, “bring up latent issues and anger friendly Arab regimes?”
The political left in Israel is waiting in vain for American pressure, he clarified. US President Barack Obama has washed his hands off the conflict, apart from occasionally reprimanding Prime Minister Benjamin Netanyahu. He has decided to hand the hot potato of the conflict to the next president. In addition, in the past six months the Islamic State has been added to the list of urgent targets as far as Washington is concerned.
And the Palestinians, we asked, what about them? “Mahmoud Abbas is good for nothing,” responded our converser, who is also a frequent and distinguished guest of the Palestinian Authority. “He is not interested in any shift which may force him to make decisions, and is hanging on to any reason, real or fictitious, to avoid negotiating with you. He often contradicts himself in speeches and appearances.”
Abbas, our interlocutor summed up the Palestinian chapter, is the big loser of Operation Protective Edge, and as long as he holds on to the title of Palestine’s president, there will be no progress. And after him? After him the deluge.
Finally, we reached Netanyahu. “Your prime minister,” the man from America said, “is troubled by two issues: Iran and the coalition or the coalition and Iran. The makeup doesn’t change. Only the order changes, in accordance with the local and international state of mind.”
Recently, he went on, the coalition has been his top priority. But if the nuclear talks with Iran end up in nothing – which is definitely a possibility in our interlocutor’s opinion – the nuclear issue will become the top priority again.
“However,” he noted, “your military threats about Iran have lost a lot of their credibility. They are less and less taken into account by the world powers.”
As an example of the priority given to coalition considerations, the American mentioned – again – the construction in the territories. In practice, he noted, Bibi only builds where he is allowed to, but he won’t admit it. He won’t jeopardize his coalition with a public admission about an actual construction freeze outside of the settlement blocs, and is therefore intentionally creating an impression of an overall construction boom.
In his list of priorities, his government’s fate overrides the fate of Israel’s relations with Washington and Ramallah. Like Abbas, Netanyahu likes the stalemate and is convinced that initiatives to change it will increase the risks – including, the man said bitterly, the risks to their personal status.
“So what do you think will happen here?” we asked as we bid farewell.
“Both the Palestinian Authority and Israel believe that time is on their side,” he replied, “and are failing to internalize the ramifications of the bi-national state option. The intensity of the hostility between the two people has reached new levels, and the gaps between you and them are deeper than during all the years I have worked for peace.
“But I don’t want to ruin your mood,” he immediately apologized.