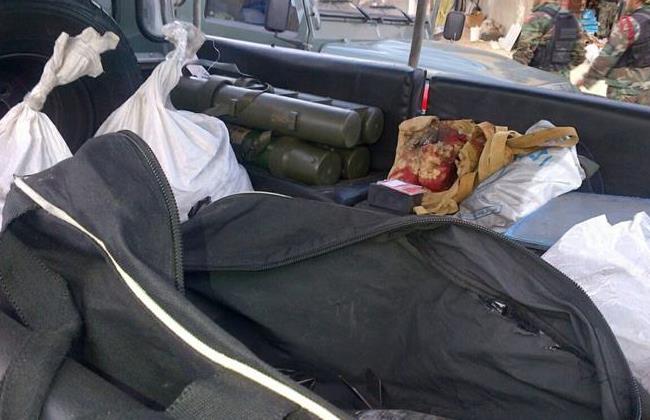 TRIPOLI, Lebanon: The Lebanese Army killed three gunmen during a raid in north Lebanon Thursday and arrested a local “terror” suspect accused of recruiting young Lebanese to join ISIS – including a relative involved in the beheading of a soldier held captive by Islamists, the military said.
In a statement, the military said “terrorist” Ahmad Salim Mikati, who was being monitored by Army Intelligence, was arrested in the Dinnieh neighborhood of north Lebanon during a dawn raid on his apartment.
It said a Lebanese soldier was slightly wounded in the operation.
Dubbed “delicate security operation,” the Army said three gunmen were killed in the raid at the apartment that housed a “group of terrorists.”
It said the military is yet to determine their identities.
The statement described Mikati, 46, as “one of ISIS’ most important cadres” in north Lebanon. Moreover, according to the Army, Mikati had set up cells affiliated with ISIS in the north.
Mikati also planned a “massive terrorist act” in coordination with his son, Omar, who is fighting with ISIS on the outskirts of the northeastern town of Arsal, according to the Army.
It said Mikati is also accused of maintaining contact with ISIS commanders inside Syria and of recruiting young Lebanese men to join ISIS on the outskirts of Qalamoun, including his son Omar, nicknamed Abu Huraira, and his nephew Bilal Mikati, who is implicated in the beheading of 1st Sgt. Ali Sayyed.
Sayyed was the first of three Lebanese soldiers to be executed by Islamist militants who took at least 30 soldiers and policemen hostage after briefly taking over the northeastern border town of Arsal in August, engaging the military in five days of fierce battles.
The militants are still holding 27 captives hostage in an attempt to swap them with Islamist inmates held at Roumieh Prison.
Mikati has a warrant out for his arrest for his involvement in the Tripoli battles last year after being released from jail in 2010 after serving six years for “masterminding a terrorist attack against diplomatic facilities and foreign interests,” the statement said.
Furthermore, Mikati was linked to the 2003 bombing of the American fast-food outlet McDonald’s in the northern city of Tripoli.
He also took part in the eight-day gunbattles against the Lebanese Army on the outer edge of Dinnieh in 1999 after which he fled to the Palestinian refugee camp of Ain al-Hilweh in south Lebanon. He belonged to a group known at the time as Takfir wa Hijra.
The statement said troops confiscated light and medium weapons, ammunition, rocket-propelled grenades, hand grenades, bombs, explosive belts as well as military equipment, including uniforms belonging to the Lebanese Army.
Security sources told The Daily Star the Army clashed with terror suspects during an early morning raid on a two-story house in the Dinnieh neighborhood of Asoun. They said two men, including a Syrian, were killed in the 5 a.m. and a Lebanese soldier was wounded in the exchange of gunfire.
Mikati was reportedly wounded during the operation and had managed to escape through a back door into nearby groves, according to the sources. But he was soon arrested by the Army and taken in an armored personnel carrier to a hospital outside north Lebanon where he was being kept under heavy military guard.
The Army statement said Mikati was being interrogated by the military.
The security sources said prior to the raid, the Army arrested Abdel-Kader al-Akoumi, a soldier who had announced his defection to join ISIS in a video posted online 10 days earlier. The Army statement made no mention of his arrest.
Fneideq Mayor Khaldoun Taleb at the time told The Daily Star that Akoumi was “mentally unstable.”
The Daily Star’s security sources said the Asoun apartment was inhabited by a “terror ring” made up of Lebanese and Syrian gunmen wanted by authorities.
They said among the fatalities was a Syrian national whose name was not immediately revealed and a charred body. The body of the Syrian man was taken to Asoun’s public hospital.