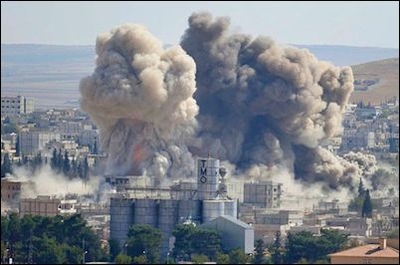 Former U.S. Secretary of State Henry Kissinger once quipped “you can’t make war in the Middle East without Egypt and you can’t make peace without Syria.” This doctrine that framed Arab politics for the second half of the 20th century, has entirely collapsed today with militias booming in Iraq and Syria, as a new tier of actors gain military and political clout in shaping the regional trajectory.
The new modus operandi of Middle Eastern politics is defined by the rise of militias in the Levant, and a shift in influence to the GCC countries and Iran. The first is coming at the expense of state infrastructure in Iraq and Syria, while the second is bringing forth nascent players in the Gulf with more political and economic leverage in places like Egypt, Gaza and Libya.
Rise of militias
From Sanaa where the Houthis are battling the central government, to the Bekaa valley with Hezbollah fighting Jabhat Nusra, it is the rise of militias that is dominating the political and military landscapes in Iraq, Syria, Yemen and Lebanon. While the Sunni-Shiite sectarian divide draws the battle lines among the many non-state actors, tribal and ethnic elements drive these alliances as is the case with support of Iran to the Kurds or that of some Sunni tribes to ISIS. In Yemen as well, the Houthis benefited from the backing of the tribes affiliated with the former regime of Ali Abdallah Saleh and who took control of Sanaa on September 22.
The rise of militias was not an inevitable outcome in either Iraq or Syria, but a product of the failure of the new and old regimes in addressing the political and economic disaffection among large segment of their population especially the Sunnis. In Iraq, the shortsighted policies of the post-war period dealt a huge blow to the central government in Baghdad and the Iraqi army. Iraq has not been able to recover from the Bremmer-Rumsfeld blunder of Debaathification in 2003 that marginalized the Sunnis and fueled a militant insurgency evolving into ISIS today. ISIS in Iraq does not exist in vacuum, it drives support from tribal groups and former members of the Iraqi army who were exorcised in 2003.
In northern Iraq as well, the failures of former Prime Minister Nouri al-Maliki in reconciling with the Kurds and agreeing on new security and oil distribution arrangements, has promoted more autonomous rule and a better armed Peshmerga force. The Iraqi Shiite parties are no exception to this rule, and with increased funding from Iran, have formed powerful militias such as the Mahdi Army, Badr Organization, Kataib Hezbollah, and Asaib Haqq. Ironically, Iran after the ouster of Maliki is growing more dependent on these militias, relying on them in fighting ISIS alongside the Peshmerga while the Iraqi government continues to struggle in finding a new minister of defense.
A similar dynamic has emerged in Syria after three years of war that has ravaged the country and left over 200,000 dead. The over-reliance of the Assad regime on Iran in fighting the opposition, and the lack of a unified rebel force against him, has multiplied the number of militias in the Syrian war. The Lebanonization of Syria is on display on the regime side with groups such as the National Defense Force, National Ideological Resistance and Hezbollah operating on their own calculus and sometimes at odds with Assad in places like Damascus and Homs. The BBC’s Lina Sinjab spoke of a regime concern about the rise of paramilitaries and “mafia style gangs” among its supporters. On the opposition side, it is a more convoluted turf with rise of ISIS and al-Qaeda affiliate al-Nusra with outside funding and arming of the more moderate brigades of the Free Syrian Army. The Kurdish militias are promising to have a bigger role in Syria in the light of the Kobane battle and the attempt by the YPG to regain control of the city.
Power shift
The rise of insurgencies and militias in what was once the cradle of civilization in the Middle East, along with the decline of the U.S. influence in the region, has shifted the center of political leverage into the GCC countries and Turkey and Iran. This has reshaped the political debate and is redefining the parameters to negotiate and settle conflicts in the region.
In Gaza, Libya, and Egypt, it is the GCC countries and Turkey that enjoy today the more leverage in shaping events and influencing those in power. This was on display during the latest Gaza war, where the U.S. effort to reach a ceasefire initially failed and another arrangement was reached after gaining consent from Cairo, Doha and Tel Aviv. But in Egypt itself, the spat among the GCC countries continues on the future of the Muslim Brotherhood and its role in politics, following the military coup last June and then the election of General Abdel Fattah al-Sisi as president. Washington, a longtime player in Egyptian politics, had to take a backseat as UAE and Saudi Arabia emerged as the more influential actors in Cairo.
In the Levant, it is Iran and Saudi Arabia which enjoy the most influence today. Lebanon cannot vote for a president before an arrangement is agreed upon between Riyadh and Tehran, and Iraq has little hope of stabilizing without a similar rapprochement. The Syrian crisis is proving to be the most daunting and complex to reach an agreement upon. One former senior Assad official told his Lebanese guest that the conflict will be a repeat of the Lebanese war which had lasted fifteen years and ended in a new consensual agreement signed in Saudi Arabia in 1989 between the fighting factions. The buildup of militias in conflict areas in the region promises a challenging road head and an uphill battle to restore stability even if ISIS is defeated or if Assad leaves power. A battle that only grows more complex with the intra-regional rift, and the declining role of the U.S. as an arbitrator in a troubled Middle East.