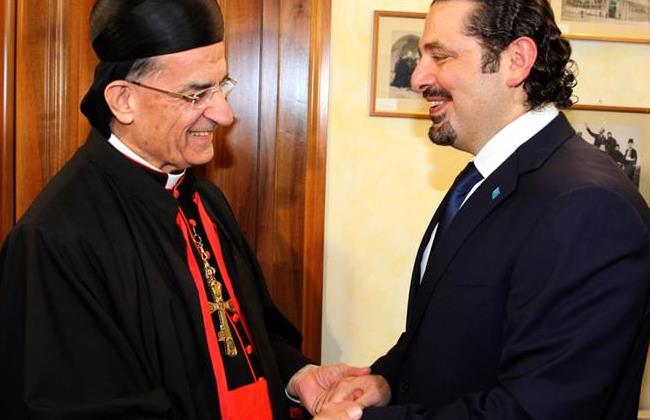 BEIRUT: Former Prime Minister Saad Hariri called after talks with Maronite Patriarch Beshara Rai in Rome Monday night for consensus on a new president as the only way to break the nearly 5-month-old political deadlock. The head of the Future Movement also said a new extension of Parliament’s mandate, which expires on Nov. 20, was essential to prevent the country from entering the unknown.
“All the political parties must have initiatives. From this standpoint, we have to reach a consensus on the election of a president,” Hariri told reporters after meeting Rai at the seat of the Maronite Patriarchate in Rome. “The March 14 parties must also reach consensus on this [presidential election].”
Hariri said the Hezbollah-led March 8 coalition did not favor the continued vacuum in the country’s top Christian post. “I don’t think that the other [March 8] side wants the presidential vacuum to continue. I think they are keen on the presidency post and we have to search for the appropriate candidates,” he said. Hariri’s remarks appeared to rule out the possibility of a March 14 candidate to the presidency and cleared the way for a compromise candidate with the rival March 8 coalition.
“Following the talks with Patriarch Rai, we as March 14 parties must search for names [of presidential candidates] that can ensure consensus among the political parties,” Hariri said.
He reiterated the Future Movement’s rejection of holding parliamentary elections before a president is elected. He said a president is the head of the state and the country’s raison d’etre. “We as political blocs must agree on the election of a president and make initiatives.”
Although Lebanese Forces leader Samir Geagea is the March 14 coalition-backed candidate for the presidency, the former premier said the Future Movement did not have any veto on any candidate.
Hariri said he had discussed with Rai the security problems in Lebanon. “But the most important topic was discussing the presidential election and the initiative that we might undertake,” he added. “For Patriarch Rai, the presidential election is the most important thing.”
Hariri came out in support for a new extension of Parliament’s term in light of the unstable security situation as Lebanon faced threats from ISIS and Nusra Front militants which briefly overran the Bekaa town of Arsal in August.
Interior Minister Nouhad Machnouk last month reiterated that his ministry was not prepared to hold parliamentary elections, scheduled Nov. 16, given the precarious security conditions.
“Extension of Parliament’s term is essential in order to prevent the country entering the unknown,” Hariri said. “We don’t want the extension. The extension is a bitter choice which we have to take because the country might go to the unknown, something which the Lebanese do not want.”He added that if the presidential election was held, parliamentary polls should be conducted six months after the vote. “If the [Parliament] extension occurred, the priority for us would be the election of a president.”
Hariri’s meeting with Rai was also attended by the Patriarchal Procurator to the Holy See Monsignor Francois Eid and his deputy Monsignor Tony Gebran, Hariri’s Chief of Staff Nader Hariri, former MP Ghattas Khoury and Hariri’s adviser Daoud Sayegh.
The talks were followed by a closed meeting between Hariri and Rai. Speaking to reporters before the closed meeting, Rai said: “[Former] Prime Minister Hariri and I always speak the same language.” Rai hosted a dinner for Hariri and his aides.
Earlier Monday, Hariri warned that Lebanon was choking under the burden of some 1.3 million Syrian refugees, constituting one third of its population, while striving to combat terrorism spilling over from the Syrian conflict. Speaking in an interview published in the French daily Le Figaro, Hariri also blamed Hezbollah’s military intervention in Syria on the side of President Bashar Assad’s forces for deteriorating security in Lebanon. “Lebanon, which is a model of forgiveness and coexistence for the entire region, is today threatened with the collapse of its institutions as a result of the vacancy in the presidency,” Hariri said. “The situation in Lebanon is deteriorating as a result of Hezbollah’s intervention in the war in Syria.”
“This intervention by a Lebanese party militia in a foreign territory took place without consultation with the Lebanese people or the Lebanese state under the pretext of preventing Syrian terrorist groups from coming to Lebanon,” Hariri said. He added that these terrorist groups are now using Hezbollah’s involvement in Syria as a pretext to attack Lebanon.
“Moreover, Lebanon is dealing with the influx of 1.3 million Syrian refugees, which occurred in a span of three years, a matter that no country can sustain,” Hariri said.
He called on the international community to come forth with its pledged aid to help Lebanon cope with the refugee crisis and support the Lebanese Army in its battle against “extremist groups.”
Hariri scoffed at the rise of ISIS, saying this militant group has nothing to do with Islam. “The so-called Islamic State [ISIS] is neither a state nor Islamic. Rather, it is a terrorist group that is committing barbarian and wicked acts under the name of our religion. The overwhelming majority of Muslims are moderate,” he said. “The moderates in the Arab world are united and determined to fight extremism. But at the same time they must face Iran’s interference in their countries.”
Meanwhile, U.N. Special Coordinator for Lebanon Derek Plumbly said after meeting Prime Minister Tammam Salam that the United Nations and the international community “remain strongly committed” to supporting the Lebanese Army. He said Lebanon risked losing the trust of the international community after lawmakers botched 13 attempts to elect a new president last week.
“I would note that Parliament failed once again last week to elect a new President of the Republic,” Plumbly said in a statement at the Grand Serail. “The negative impact of this on stability and confidence is self-evident.”“The international community has repeatedly called on Lebanon’s leaders to engage to resolve the impasse. For Lebanon’s sake, let us hope that it will be overcome soon and a president elected without further delay,” he added.