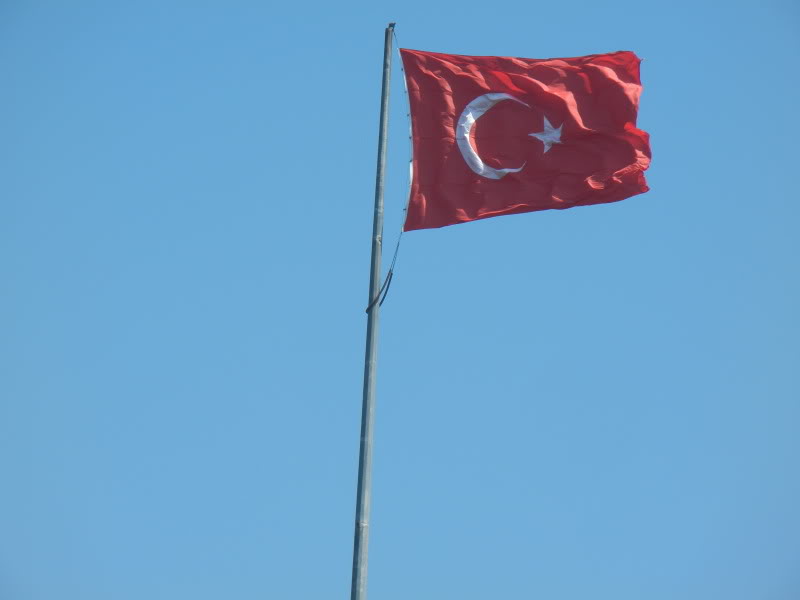 On Kobane, the PKK and dragging Turkey to war
Ceylan Ozbudak /Al Arabiya
Saturday, 12 October 2014
Despite evidence stating that the Kurdistan Workers Party (PKK) is a Marxist-Leninist terror organization, it has been treated kindly by the EU and the U.S. lately, as if the group were rainbow lovers.
The PKK and the Syrian Kurdish Democratic Union Party (PYD) – which is affiliated with the PKK – was supposed to save the Middle East from ISIS and bring democracy to a land of oppressors and become heroes. After being badly beaten by ISIS, the same PKK has been rampaging through the streets of Turkey for the last week, showing its true face to the whole world. At least 31 people were killed and dozens injured across Turkey starting Tuesday as sympathizers of the PKK resorted to violent actions in protest of ISIS taking over the Syrian town of Kobane.
Municipal buildings, public libraries, schools, Islamic centers, buses, shops and political party centers were torched by the PKK supporters. Due to the widespread violent protests in the Kurdish populated southeast of Turkey, a curfew was imposed starting from late on Tuesday. The military replaced the police in the cities under a ‘state of emergency’. With these actions, the PKK was not punishing Turkey for not initially joining the fight against ISIS, but punishing the Kurds of Turkey for not joining in.
The protests against the recent advance of ISIS in Kobane were not limited to Turkey. Demonstrations flared up in European cities including Rome, London, Vienna, Cologne and Stockholm. Hundreds of Kurdish protesters have occupied the Dutch parliament building, broke into the European Parliament and even caused disorder in always calm Marseille.
The PKK is trying to drag Turkey into war
As the determined march of ISIS continues, even under the heavy shelling of the coalition forces, (like I explained would have no effect) the Northern Syrian town of Kobane has become a battleground for the PYD/PKK insurgents against ISIS. The PKK is losing the town and is on the brink of complete destruction and apparently aims to drag Turkey down with it. After losing a great majority of its fighters in Kobane (along with the organization’s will to exist) the PKK decided to create a civil war in Turkey to try to divide the country and gain territory along with new recruits. In the PKK’s scenario, Turkey would agree with their requests in order to continue the peace process and Turkey would be forced into a war in Syria. Once Turkey enters Syria to fight ISIS, the battlefront would expand to scores of other groups and the Assad regime. Again, according to this scenario, the Turkish military would be too busy fighting a war in Syria – and possibly in northern Iraq – to deal with an internal threat, allowing the PKK to become rooted in the southeastern Turkish towns.
“It is time to listen to Turkey, and not impose decisions from London, Washington, and Paris”
Ceylan Ozbudak
But the PKK did not calculate the fact that neither Turkish bureaucracy nor the Turkish government was open to such provocation and manipulation.
I believe the PKK does not represent all Kurds; the compassionate, Muslim Kurds who are my neighbors, friends, relatives and fellow Turkish citizens. Most Kurds do not support PKK, just as most Americans do not support the KKK. When we look at the demographics of the clashes in Turkey, the majority of the people fighting against the PKK’s supporters were Turkey’s religious Kurds. Also on the Syrian side, many residents of Kobane left the town long before ISIS’ occupation because they didn’t want to stay under PYD/PKK rule, which did not bring them freedom but fear. These details, these facts and sentiments are not highlighted in the Western press. PKK, an organized group of Marxists have successfully deceived the West that they are the ‘Kurdish resistance’ and the best answer to ISIS. I believe nothing could be further from the truth.
The U.N., NATO and Turkey’s allies in the West are mounting daily pressure to force Turkey to get into a war in the Middle East using the “Kurdish civilians in Kobane” card. Firstly, there are few Kurdish civilians left in Kobane; 182,000 are in Turkey and in safety. The town is left only to PYD/PKK forces and ISIS. Secondly, Turkey has nothing to feel guilty about since it has been shouldering the spillover of the war alone for the last three years like a champion. Turkey has already proven to be on the side of civilians – all civilians – from all ethnic backgrounds without any segregation. Hosting close to two million Syrian and Iraqi refugees, Turkey also took in 182,000 Kurdish civilians from North Syria recently in addition to tens of thousands of Yazidis and many other ethnic minorities. Turkey has already spent more than $3.5 billion on refugees alone, which spared Europe from a giant refugee influx.
Most of what our Western allies are focusing on now is aerial bombing, which has resulted in civilian casualties. Turkey does not believe in increasing militarization as a solution. It is quite strange to expect that the machinery of war, such as bombs, rifles and missiles, should create an environment of peace and stability.
The world is tired of the conflicts in Syria and Iraq; the West is pushing Turkey to the front lines to get involved in the war and bring it to an end. No one is thinking about the civilian casualties, no one is interested in sustainable peace and it seems that no one is interested in what happens to Turkey. The PKK on the other hand is looking for an opportunity to divide Turkey. Turkey will not bow down to provocations. It is time to listen to Turkey, and not impose decisions from London, Washington, and Paris.