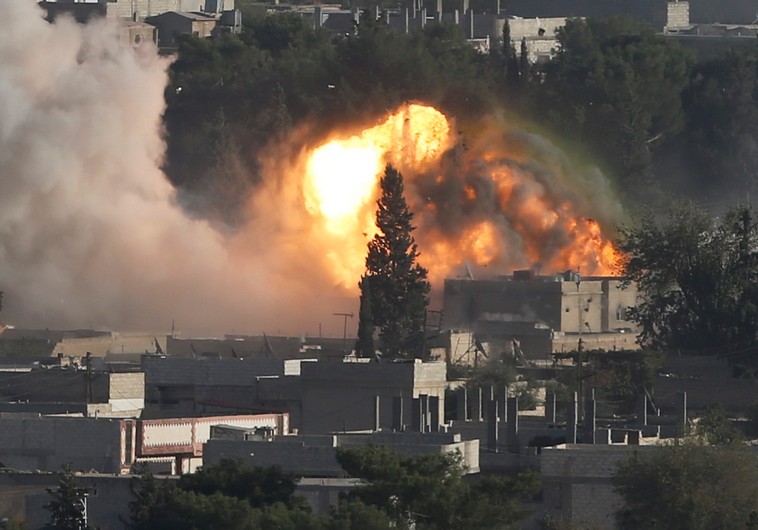 Kobani’s fall would be symbolic setback for Obama Syria strategy
By REUTERS \ WASHINGTON – It’s not a particularly strategic location, the United States and its allies never pledged to defend it, and few people outside the region had even heard of it before this month.
But the symbolism of US-led airstrikes failing to stop Islamic State militants from overrunning the Syrian city of Kobani could provide an early setback to US President Barack Obama’s three-week old Syria air campaign – far beyond its battlefield importance.
If Islamic State seizes full control of the city – which US officials acknowledge is possible in coming days – it would be able to boast that it has withstood American air power. A US-led coalition has launched 50 strikes against militant positions around the city, most of those in the last four days.
Islamic State also would be able to free up thousands of fighters to pursue territorial gains elsewhere in Syria and Iraq, analysts said.
Inevitable questions would arise over Obama’s pledge to keep US ground troops out of the fight and the strength of his international coalition. Turkey, whose border abuts Kobani, has declined to join military action against Islamic State.
“Judging the overall coalition from a single town in northern Syria … is slightly unfair,” said Shashank Joshi of London’s Royal United Services Institute. “But I think it will dent overall confidence in the coalition and it will concern many people as to whether the US can really stop this movement.”
A Kobani victory would also provide valuable propaganda for the Islamic State, which has proved adept at providing packaged video footage of its fighters in action, while the United States can only produce fuzzy pictures of air-launched bombs and missile blowing up often unidentifiable objects on the ground.
Jeff White of the Washington Institute for Near East Policy said Islamic State will “claim it has been able to do this in the face of a US-led bombing campaign.” The group’s supporters “will find that uplifting” and its opponents depressing, White said.
The city’s fate also holds importance for Syria’s Kurds, who have enjoyed a semi-independent region that includes Kobani after President Bashar Assad’s grip on his country loosened.
For Turkey, the loss of Kobani would appear to be a mixed blessing.
Ankara opposes both Assad and Kurdish independence, and has done nothing to aid in Kobani’s defense. But if the city falls, Islamic State will have stitched up a 250-kilometer (155-mile) stretch of territory along the Turkish border, according to some analyst estimates.
TOO MUCH EMPHASIS
Kobani has riveted international attention largely because of its proximity to Turkey – and television cameras there have captured the fighting just across the border.
On Friday, Kurdish forces and Islamic State fighters were reported to be engaged in street battles within the city. A UN envoy said he feared a massacre of thousands of people if Islamic State was victorious.
While Obama has said his aim is to degrade and ultimately defeat the Islamic State group, his first priority appears to be limiting its advance in Iraq. The air strikes in Syria are designed in part to deprive the group of safe haven there.
US officials say putting so much emphasis on a single city misrepresents the US-led air campaign, which will take time. Much also depends on moderate Syrian rebels that Washington will train and equip, as well as US-backed Iraqi security forces.
“To hang Kobani around the military’s neck represents a fundamental misunderstanding of the elements of the strategy we’re pursuing and limits of military power in pursuing that strategy,” said a US official, speaking on condition of anonymity.
US officials, echoed by defense analysts, point out that Islamic State’s siege of Kobani has forced the group to bring its military hardware out in the open, where warplanes have attacked it daily.
“They seem to really want Kobani and have their flags flying over it,” a second US official said. “They are paying a very heavy price.”
NO STRATEGY CHANGE?
The US government says there will be no change in Obama’s strategy – which rules out US troops in ground combat in both Iraq and Syria – if Kobani falls.
But if it turns out that coalition air power alone was unable to help the Kurds hold Kobani, that “might prompt a redefinition” of Obama’s “no boots on the ground” pledge, said retired veteran US diplomat James Dobbins.
Dobbins, now at the Rand Corporation think tank, predicted the limits of air power around Kobani would accelerate a debate within the administration over deploying advisers and forward air controllers on the ground – but in Iraq, where they would partner with Iraqi security forces, rather than in Syria.
White, of the Washington Institute, said Obama’s lengthy timeline for battling Islamic State might also come into question.
“They’re fighting the war on their terms,” he said of Islamic State. “Their timeline and our timeline don’t coincide.”
10/11/2014 10:09