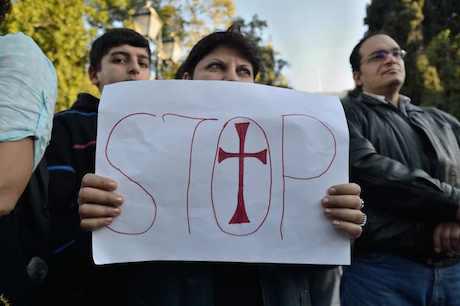 https://www.opendemocracy.net/arab-awakening/mina-fayek/three-years-on-and-copts%27-plight-continues
Three years after the Maspero massacre, no justice has been served. This was a state crime, and more worryingly, the Egyptian state seems to be increasingly engaging in hostile acts towards Copts.
On 9 October, 2011 a group of Egyptians organized a protest from Shubra district to Maspero, the headquarters of the Egyptian Radio and Television Union, to protest an attack that had taken place on a church in the Upper Egyptian city of Aswan. The goal was to also demand the resignation of the Governor, the end of discrimination against Copts and the enactment of a unified law for building houses of worship.
Shortly after the march reached its destination, the military forces violently attacked it with live ammunition and by running over protesters, leaving more than 25 dead and hundreds injured, most of whom were Copts. Tens of civilian protesters were arrested while only three soldiers were convicted, receiving light sentences of two or three years in jail, on charges of “involuntary slaughter”. One and a half years later, two Coptic protesters were sentenced to two years in jail for allegedly stealing a machine gun from security forces during the clashes.
The Egyptian state has a history of discrimination against Copts and a reluctance to protect them from extremist attacks. Back in the summer of 2013, in the wake of ousting former President Mohamed Morsi, Egypt witnessed one of the largest waves of attacks against Coptic churches, institutions and properties by Islamists. The security forces were largely inactive despite the calls by Egypt’s largest minority. Soon after the attacks, the state promised it would reconstruct the damaged churches, which it failed to deliver. However, this inaction comes as no surprise as it’s one if the commonalities between the consecutive regimes that have ruled Egypt for decades.
Yet the significance of the Maspero massacre among the Coptic community comes from the fact that the state was the direct perpetrater of this crime. Copts have become used to state discrimination and its failure to protect them, but to viciously assault them was appalling and surprising for many.
To add insult to injury, state media played a very instigative role during the clashes. Rasha Magdy, a TV anchor appeared on Channel 1 on national television claiming that protesters were armed and that they had killed three army soldiers. She also urged Egyptians to defend the soldiers from what she described as “violent protesters” which further escalated the clashes.
Last month, Ahmed Moussa, another TV anchor and a staunch regime supporter, hosted a guest on his show who claimed that protesters conspired with the Muslim Brotherhood in order to “embarrass” the military and spread chaos.
Surprisingly, when Egypt celebrated the forty-first anniversary of the October war on 1 October 2014, out of all the Egyptian TV anchors, Magdy and Moussa were chosen to host the celebrations on state TV, which sparked anger among Copts on social media. The state’s choice seemed like an award to these two anchors after they sided with the state against the Copts. This also came less than ten days before the massacre’s third anniversary. Thus, it seems to be a part of a broad strategy by the new regime to wipe the history of the past three and a half years from the memory of Egyptians.
Even during Morsi’s rule, in April 2013, police forces attacked the Coptic Cathedral in the Abbaseya district with tear gas after rumours spread that Copts had attacked passing cars. Clashes between locals and mourning Copts broke out during a funeral of four Copts, who were killed in sectarian violence the day before, and while the police were supposed to separate them and protect both the cars and the cathedral, they sided with the locals and attacked the Copts. The president’s aid at the time blamed the Coptic mourners for starting the clashes.
Recently, the pattern of discrimination by the state against Copts has increased alarmingly. Two incidents took place recently that were very similar to the Maspero massacre.
The first happened one month ago when the police brutally assaulted hundreds of Copts in Jabal el-Tair village in Minya. According to the testimonies of the villagers, they were beaten, arrested, and called ‘infidels’ after they had organized a protest to demand an investigation into the disappearance of a Coptic housewife. Ironically, this came just a few days before President Abdel Fattah El Sisi’s speech at UNGA where he said that Egypt is a “country that respects the law” and people’s “rights and freedoms”.
The other incident took place three days before the anniversary of the Maspero massacre. A group of policemen physically assaulted and insulted a Coptic family in Cairo’s Imbaba district and kicked its 63 members out of their seven-storey home. The police also confiscated many of their properties as well as their savings.
The reasons behind such assaults are still unknown, although there’s no legal framework or justification whatsoever for what these policemen did. No investigation has been launched into either incident and the silence from El Sisi’s administration and government officials, who claim to be establishing a “state of law”, is almost deafening.
Three years after the Maspero massacre, which has set a new precedent for direct state violence against Copts, no justice has been served. More worryingly, the Egyptian state seems to be increasingly engaging in hostile acts towards Copts. And while the new administration was once seen as a refuge from Islamists, easing the suffering of Copts, it appears to be yet another contributor to their ongoing plight.