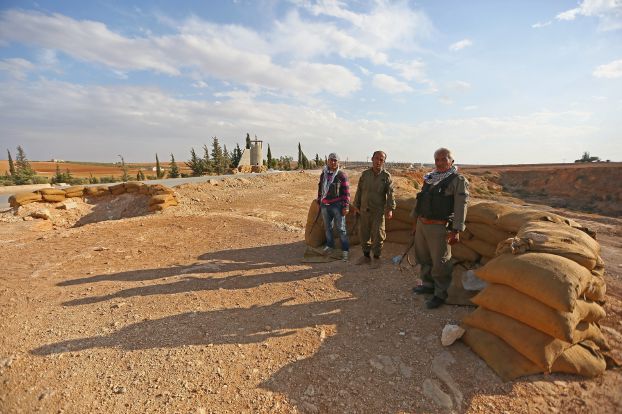 Western Fear of Angering Turkey Leaves Besieged Kurdish Town at Mercy of Islamic State
By: Jonathan Spyer/The Jerusalem Post
October 09, 2014
http://www.meforum.org/4845/western-fear-of-angering-turkey-leaves-besieged-kurdish-town-at-mercy-of-islamic-state
Regional and global powers are indifferent to the fate of the Kurds of Syria.
The fate of the Kurdish enclave in Kobani appears to be sealed. The greater part of the formerly Kurdish-ruled area has already fallen to the forces of Islamic State. Some 9,000 Islamic State fighters are positioned close to the last remaining redoubt – Kobani city itself. The black flag of the Sunni Islamists is already flying in three neighborhoods of the city.
On Monday, the Kurdish authorities ordered the evacuation of all remaining civilians from the city. Journalists are not being permitted to enter. The forces of the YPG (People’s Protection Units) were preparing to fight the jihadis for every street of the city.
However, not all civilians have been able to leave. If the city falls, a slaughter is likely.
Islamic State has now integrated the heavy armor and artillery that it took from the garrison in Mosul and from Syrian President Bashar Assad’s army in the bases of Division 17 and Tabaqa. The Kurds have only light weapons, some machine guns, and a few rocket-propelled grenades.
The imminent fate of the Kobani enclave offers an object lesson in the limited efficacy of courage and commitment (which the YPG has in abundance), in the face of the indifference of regional and global powers to the fate of the Kurds of Syria.
The Kurdish Regional Government of northern Iraq also received a hammer blow from Islamic State in July and August. In early August, the Iraqi Kurdish capital of Erbil looked set to suffer the same fate that now seems inevitable in Kobani.
What saved the Iraqi Kurds was the swift application of US air power, and a subsequent massive commitment of Western arms to the Peshmerga forces of the KRG.
At present, the Peshmerga, in cooperation with Western special forces and US air power, are seeking to turn back the advances the jihadis made in the summer, with some success.
Turkish hostility to the embryonic Kurdish autonomous zones in northern Syria is the key to understanding Western and regional indifference to the fate of Kobani.
So what makes Kobani so very different from Erbil? The Syrian Kurdish enclave is dominated by the Democratic Union Party (PYD), which is closely associated with the Kurdish independence movement PKK. This insurgent force is anathema to Turkey, against which it has fought since 1984. Turkey, ruled by the Islamist AKP, is a NATO member, and is still considered an important and powerful ally of the US and the West.
Turkish hostility to the embryonic Kurdish autonomous zones in northern Syria is the key to understanding Western and regional indifference to the fate of Kobani. Turkish armor is currently waiting on the border, facing Kobani, but no effort is being made to assist the Kurdish fighters. Indeed, the Turks have acted to prevent Kurdish volunteers from reaching the combat zone in recent days.
Some Western air strikes have been carried out in recent days, but with little apparent effect.
The desire to appease Turkey, along with a determination to stay outside of the Syrian conflict arena, explain the abandonment of Kobani.
Its loss, if it occurs, will form a legacy of bitterness for the Kurds, which may lead to the collapse of the Turkish-PKK peace process and will almost certainly lead to a renewed Kurdish militancy. A vivid sense of betrayal will remain.
**Jonathan Spyer is a senior research fellow at the Global Research in International Affairs (GLORIA) Center and a fellow at the Middle East Forum.