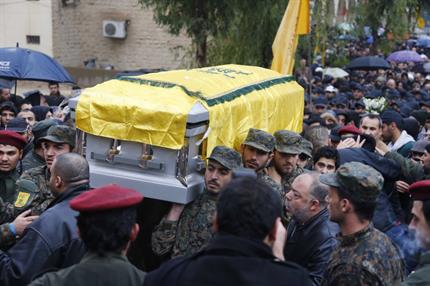 If It Wasn’t for Hezbollah
By: Abdulrahman Al-Rashed/Ashar Al Awsat
Thursday, 9 Oct, 2014
The word “if” is Hezbollah’s propaganda tool to justify its involvement in Syria, pushing Lebanon’s Shi’ites, if not the whole country, into the conflict. The Shi’ite group justifies this by saying that if it had not supported the Assad regime, “Shi’ite religious shrines would have fallen,” or “if Hezbollah had not gone to Syria, takfirists [those who accuse others of apostasy] would have made it to Dahieh,” a suburb south of Beirut, or “if Hezbollah had not protected Lebanon’s borders, the Islamic State of Iraq and Syria [ISIS] would have seized it from south to north.” And now another one of these “if” statements is being attributed to the Maronite Patriarch Bechara Boutros Al-Rahi. According to media reports, a source close to Hezbollah claims that before heading to Rome, Rahi told his inner circle that “if Christians in Lebanon were asked their opinion on the ongoing developments, they would all give the same reply: ‘If it wasn’t for Hezbollah, ISIS would have been in Jounieh’ [a coastal city 10 miles north of Beirut].”
If the patriarch truly said this, then it seems he has not yet heard of ISIS and Al-Nusra Front’s advance on the Damascus neighborhood of Ghouta despite the efforts of Hezbollah fighters in the area who had gone to protect Shi’ite shrines and prevent the groups’ advance on Lebanon’s borders. Perhaps the Patriarch does not feel threatened and is still certain that Hezbollah can protect him from ISIS’ evils—but Jounieh is no more than 20 minutes’ drive away from areas the jihadist group has already captured.
We can only judge these conditional statements by observing the results on the ground. Hezbollah is no longer protecting any Shi’ite holy sites in Syria. Its fighters are currently dying in defense of Assad’s regime, far removed from anything sacred. They are being forced to do this because Iran has always decided Hezbollah’s wars. Have the Shi’ites become safe after thousands of their sons were dragged into the Syrian conflict? Of course not. For 30 years the Shi’ites have not felt as threatened by explosions, assassinations and security restrictions as they do now. This is all because of Hezbollah’s involvement in the Syrian conflict.
It is worth asking whether Jounieh and the Christian hill-country and plains are really safe thanks to Hezbollah’s “bravery” in Syria. Those who follow the news will know how the Lebanese army is currently being humiliated, how the innocent are being abducted, and how fear is spreading. Jounieh, one of the most secure areas in Lebanon, has now become a signpost on the map of global terrorism and violence thanks to this “if” rhetoric. These conditional proclamations are used to sell a myth and have nothing to do with reality. Truth be told, if Hezbollah had not gone to fight in Syria, Lebanon would have remained neutral; but this is not the case. When speaking of countries’ interests and people’s safety, we must deal with facts and not with hypotheses and wishes. Hezbollah is drowning in the quagmire of the Syrian conflict because the Iranians sent it there two years ago thinking it would be capable of saving their ally Bashar Al-Assad. Tehran has now begun to realize what much of the world has been saying for a long time now: the Syrian regime died when Bashar’s father, Hafez Al-Assad, died—this era is a transitional one. Hafez Al-Assad was a shrewd politician. His son inherited governance, but not his father’s wisdom and experience. He therefore embroiled himself and his allies into this conflict and destroyed the country through his crimes, including the assassination of Lebanese politicians, the expulsion of political figures loyal to his father, and his thoughtless behavior regarding Dera’a’ and the wider Syrian revolution. Hezbollah as a resistance group ceased to exist ever since the Israelis withdrew from Lebanon 14 years ago. After this, Hezbollah turned into a mere militia group linked to Tehran and Assad.
Hezbollah has only temporarily served Assad in the war. It has done so by dragging terrorist organizations from Syria into Lebanon. The Syrian president wants to export the war to his neighbors Iraq, Turkey and Lebanon. But how can a small country such as Lebanon fight ISIS and the Al-Nusra Front alone when it clearly takes a coalition of many countries from around the world to take on ISIS in Syria and Iraq? After all this, then, does it make sense for Patriarch Rahi to say that Hezbollah has made Jounieh safe, when it has actually stoked the embers of sectarianism in Lebanon and brought ISIS and the Al-Nusra Front closer to its borders?