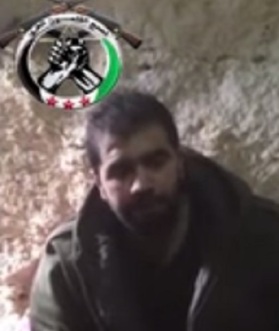 A “war of hostages” appears to have started between Hizbullah and Syrian rebels in the border region of Qalamun, with sources announcing that the Lebanese group has seized the bodies of dozens of militants and the Free Syrian Army publishing a video featuring a Hizbullah captive. Syrian activists were on Thursday circulating the video, in which a Hizbullah fighter identified as Imad Ayyad urges his family to “meet the demands” of the FSA should they contact them.
Ayyad said he hails from southern Lebanon while websites close to Hizbullah said the 24-year-old fighter is from the Tyre District town of Tayrfilsay. In the video filmed by the so-called Western Qalamun Coalition in Assal, Ayyad is seen sitting in front of a rock while none of his captors appear on camera. He said he is in the custody of the FSA, knowing that Hizbullah has not officially acknowledged that the fighter was captured by Syrian rebels. Answering the questions of his captors, Ayyad said Hizbullah tasked him with “a mission in Qara and Assal al-Ward in Qalamun’s mountains,” noting that he is a “Hizbullah reservist.” He said he was among “four Syrians and three Lebanese” guarding a “Hizbullah-commanded” post in Qalamun’s mountains. “I was in the tent and I fled to an area behind the barricades. I then reached an apple grove and sought refuge at an elderly man’s place until I was taken by your men,” Ayyad said, responding to his interrogator’s questions. “There are 200 Hizbullah fighters in Qalamun’s mountains and there are Syrians operating under our command … We also have fighters specialized in air defense,” Ayyad added. With his arm bandaged, the fighter then appears in another scene after taking off his jacket. Addressing Hizbullah chief Sayyed Hassan Nasrallah, Ayyad said: “We come here and we get wounded and they (other Hizbullah fighters) abandon us. We tell them we’re wounded and they say ‘what can we do for you, can’t you see the shelling, how can we reach you.’” “I’m with the Free (Syrian) Army and they are treating me well,” he added, addressing his mother, father and brothers. The video was posted after Hizbullah’s al-Manar TV overnight published pictures of “bodies of militants killed by the gunfire of Hizbullah’s resistance fighters and the Syrian army in the Qalamun region in the assault they waged yesterday in al-Jibbeh and Assal al-Ward.” “These bodies are now in the hands of the members of the Islamic Resistance,” pro-Hizbullah websites announced. Al-Manar also reported the death of Mohammed Dawida, describing him as one of the most prominent commanders of the FSA. He was killed when the Syrian army targeted his group near the town of Assal al-Ward, the TV network said. Meanwhile, the Syrian Observatory for Human Rights said fierce clashes “are still ongoing between regime forces, allied gunmen and Islamist brigades on the outskirts of the town of Zamalka” in Dama scus province. The Observatory said “two members of Lebanon’s Hizbullah were killed in clashes with al-Nusra Front and Islamist brigades” near Zamalka. It also confirmed that an Islamist rebel was killed in “clashes with regime forces backed by the National Defense Force (militia) and fighters from Lebanon’s Hizbullah in Qalamun’s mountains.” Hizbullah had on Tuesday made advances in the region and at least eleven of its fighters have been killed since Sunday according to a preliminary toll.