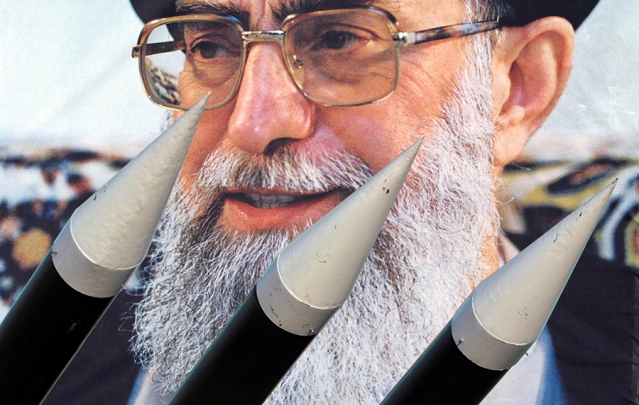 During his recent stay in New York, President Hassan Rouhani hosted a “private dinner” for a number of former US officials, oil executives, and lobbyists. According to several participants, Rouhani tried to pass on a simple message: If the US does not help him clinch a deal on the nuclear issue, the next elections in Iran could return people like “that man” to power.
Earlier, Foreign Minister Javad Zarif had relayed the same message at the Council on Foreign Relations in New York. “If you don’t help us, you could get that man again,” he warned. But who is “that man,” the person whom Rouhani and Zarif are trying to present as a bête-noire for the Americans?
The answer is former President Mahmoud Ahmadinejad. To be sure, Ahmadinejad does not have a constituency of his own and is unlikely to win any elections without the say-so of the “deep state,” that is to say the military-security apparatus, the network of political mullahs, and interest groups within the business community.
Rouhani and his political mentor, former President Hashemi Rafsanjani, however, hope that a deal with the US would give them momentum to seize control of the Islamic Majlis, the ersatz parliament, next year, and then capture the Assembly of Experts, which, in turn, chooses the “Supreme Guide.”
There is no doubt that within the Khomeinist establishment, the Rafsanjani faction is the least hostile to the United States. Rafsanjani has always fancied himself as an Iranian version of Deng Xiaoping, the leader who closed the chapter of Maoist revolution and opened the way for China’s inclusion into the global system.
Rafsanjani’s argument is that the US does not have any problem with the “Islamic” character of the Khomeinist regime. In fact, there are four “Islamic Republics,” and three have normal and, at times, even close ties with Washington. Provided the Khomeinist regime does not threaten US interests, Washington couldn’t care less what the regime does inside Iran. The fact that China is world number-one for number of executions has not prevented it from becoming Washington’s closest trading partner (the Islamic Republic in Iran is second!)
For more than two decades Rafsanjani has shed metaphorical tears over the mistake he made after Khomeini’s death in 1989 by propelling Ali Khamenei, a junior mullah, into the position of the “Supreme Guide.” At the time, Rafsanjani believed that by becoming president he would seize control of the powerful machinery of state while Khamenei, a low profile figure interested in poetry and sitar, would fade away.
He was proved wrong. A system built around the concept of velayat e-faqih (custodianship of the Islamic jurist) could not jettison its central organizing principle. Rafsanjani also underestimated Khamenei, who turned out to be a tough leader dedicated to the bizarre ideology of Khomeinism.
A quarter of a century later, Rafsanjani is now toying with the idea of correcting his mistake by becoming “Supreme Guide.” His faction has won the presidency and hopes to win the Majlis next year. If it succeeds, the way could be open for also winning the Assembly of Experts in May 2016. And then, who knows?
This is why Rafsanjani has been in campaign mode for the past year or so. Moving at top speed, he has published several volumes of his memoirs, designed to remind people of his close ties with the late Ayatollah Khomeini, and his supposed successes as a two-term president. He has granted over 40 interviews, including several with Western news outlets. After years of not being allowed to step out of Tehran, Rafsanjani has also been travelling all over the country, projecting himself as a potential savior of the nation. The foreign ministry in Tehran has been ordered to include a meeting with Rafsanjani in the programme of all foreign dignitaries coming to the Islamic Republic. Thus, Rafsanjani’s face is plastered on front pages in Tehran almost daily. The former president has also orchestrated a campaign of “dirty tricks” against mullahs whom he regards as potential rivals for the top position.
Right now his main target is Ayatollah Muhammad-Taqi Mesbah-Yazdi, a member of the Assembly of Experts, who has publicly accused Rafsanjani’s faction of trying to ditch the revolution and sell Iran to the American “Great Satan.” Rafsanjani has accused Mesbah-Yazdi of having opposed revolutionary action against the Shah. Mesbah-Yazdi has retaliated by accusing Rafsanjani of underhand dealings with the Mojahedin e-Khalq, an Islamist guerrilla group active inside Iran in the 1970s and later opposed to Khomeini.
Khamenei’s recent brief hospitalization gave the succession fight added intensity. Figures close to Rasfanjani, notably the mullah Qorban-Ali Dorri-Najafabadi, have publicly raised the issue of succession. That Khamenei is younger than Rafsanjani and Mesbah-Yazdi has not dampened speculation regarding his eventual demise. If he lives as long as Khomeini, Khamenei would have another 13 years to go. Also, he may do constitutional jujitsu with amendments that replace the presidency with a prime minister. He has publicly raised the issue, suggesting it might be on the agenda within four years. In any case, the next Assembly of Experts could remain in place until 2024, by which time Khamenei, Rafsanjani and Mesbah would all have 90 candles on their birthday cakes.
The US would be foolish to become involved in factional feuds in Tehran. The mullahs’ republic in Iran is not the People’s Republic in China and “Obama in Tehran” could only come as a caricature of “Nixon in Beijing.”
In their quest for supreme power, Rafsanjani and Mesbah-Yazdi face another problem. Unlike Khamenei, they wear white turbans, which mean they are not descendants of Fatimah and Ali and thus not part of the Ahl el-Beit (People of the House). A black turban may well merge from the shadows to inject a dark horse note in the drama.