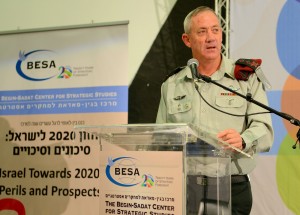 In first interview since Operation Protective Edge, IDF Chief of Staff Gantz says Gaza operation was a success: ‘We have military officials around the world telling us we have raised the bar in terms of ethical and professional standards.’
“Israel strategic position is better this Rosh Hashana (Jewish new year) than it was last year,” IDF Chief of Staff Lt. Gen. Benny Gantz said in his first interview after Operation Protective Edge ended last month. The full interview with Gantz will be published Friday for Yom Kippur. Gantz, who is facing mounting criticism regarding the operation is set to finish his term as head of the Middle East’s most powerful military in four months, and is confident the army did its job properly. Regardless he is much more concerned by the threat posed in the northern by Hezbollah than Hamas in Gaza in the south. The threat facing Israel from the Lebanon is much larger than that posed by Gaza,” Gantz said, “but does that mean I need to drive to Jerusalem to post haste and demand we attack Lebanon?’ he asked rhetorically. The comment is a veiled response to critics who said the army failed to address the issues of Gaza’s tunnels, one of the central missions during Operation Protective Edge, which many said was ignored by the State until the operation. “The IDF, the politicians, Cabinet members… we all knew and understood the tunnel threat,” he said.
For Gantz, the operation was a professional success: “A number of top ranking army officials from different countries arrived here and told us: ‘Your professional conduct was unprecedented.’ We have raised the bar to level they do not know what to do with.” Thus Gantz also stresses the need for additional funds for the IDF. The military budget was at the heart of this year’s battle over the State budget, and Gantz says he is not completely at ease with the arrangement reached by Finance Minister Yair Lapid and Prime Minister Netanyahu which will see close to NIS 6 billion transferred to the IDF, in addition to its regular budget. “I am concerned by this agreement. The army cannot be a beggar being called out for every penny – we need to look at the macro.” Regarding his looming departure from the only professional home he has ever known, Gantz looks back at 37 years of military service with pride: “I’m leaving whoever will be my replacement a very good army. Much more integrated, with a higher ethical and professional standard.” In the full interview, set to be published Friday ahead of Yom Kippur, Gantz will talk about the controversial Hannibal Directive employed during the kidnapping of Hadar Goldin, the attempted – and possibly successful – attempt to kill the head of Hamas’ military wing Mohammed Dief.
Ron Ben-Yishai, Yossi Yoshua, Alex Fishman and Yoav Zitun contributed to this report