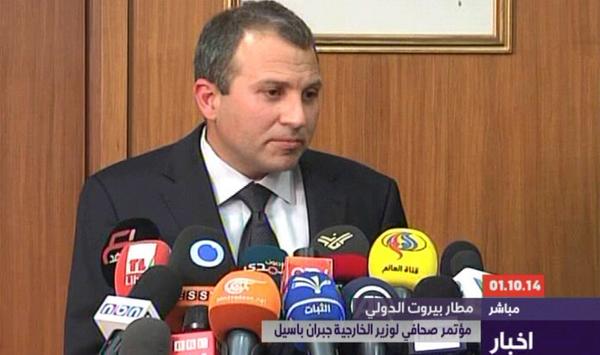 Foreign Minister Gebran Bassil has been ridiculed in recent days for his embarrassing performance at a meeting he held on the sidelines of the U.N. General Assembly session with the foreign minister of the United Arab Emirates.

A video of the incident has been circulating, so there is not much to add. A smirking Bassil is repeatedly seen calling out to an assistant, asking “Rami, where is Caroline?” He then makes a hand gesture indicating that the woman, Caroline Ziadeh, the deputy permanent representative of Lebanon at the U.N., is attractive. The scene then cuts to Ziadeh, who is seen sitting down and straightening her skirt with an expression suggesting she is not happy.

On Wednesday, Bassil held a press conference to explain the incident. Yet he only dug his hole deeper by saying, “Yes she is an elegant woman, and Iwas in competition with the Emirati foreign minister, each of us praising our country’s women.”

After all, Lebanese officialdom became agitated earlier this year when skier Jackie Chamoun had the misfortune of showing her breasts in the film of a photo-shoot for a calendar. She did not pose nude in the calendar itself, nor was her nudity on film meant to be seen by the public. Yet Chamoun issued a cringing apology and Sports and Youth Minister Faisal Karami asked Lebanon’s Olympic Committee to initiate the “necessary inquiries” into the incident.

I doubt anyone will make the necessary inquiries into Bassil’s performance. Yet that idea would not seem so strange in countries where such issues are taken seriously. The minister is hierarchically Ziadeh’s superior, someone in a position to advance her career or interrupt it. That this individual should be seen commenting on the physical attributes of his envoy, and in front of a ministerial counterpart no less, is remarkable. No one is suggesting Bassil has taken advantage of his position, but in many countries even the potential for that to happen is never dismissed as irrelevant.

But Lebanon is a country where there have been obstacles to passing laws curbing domestic violence, so don’t expect there to be any momentum to tighten legislation to end sexual harassment in the workplace. Again, no one is accusing Bassil of this, but given his actions, clearly he is not someone whose priority is to create a work environment in which proper behavior is respected.

When it comes to relations between the sexes at work, an argument can be made that the West has gone too far. Not every wink and nod needs to signify sexually harassment, and not every salacious story has to be brought up with one’s lawyer. It is frequently better for problems to be resolved within the work environment when possible, with the law available when it becomes impossible.

In Lebanon the margin women have to respond against harassment is much narrower than in the West. Don’t expect the courts to become a vanguard for action in this regard, or Lebanese society to take a strong stand against sexual harassment, especially when it involves an employee accusing a boss. I would wager that in most such cases it is the employee who is dispensable, not the boss, and that it is far easier for a company to resolve a problem by dismissing a subordinate.

In one noted case last April, a woman, Hoda Sankari, secretly filmed the governor of north Lebanon and acting governor of Beirut, Nassif Qaloush, implying that her contract with the governorate had not been renewed because she had not slept with him. The video was shown on primetime news and forced Qaloush to resign in May.

Since then Sankari has said she would file a lawsuit against Qaloush, who no longer enjoys immunity from prosecution as a grade-one civil servant. Yet no disciplinary action was taken against the former governor by the Interior Ministry, despite the evidence. Sankari reminded us there is a swath of top-level civil servants who are legally protected if they ever decide to take advantage of their employees.

With Bassil, it was different. The minister suggested that Ziadeh was worth bringing into the room not because she is a professional diplomat whose presence was required, but because she has a nice body. It was his sheer vulgarity that was striking, the lack of respect for her competence, from a man whose job it is to show Lebanon’s best face. You dare not wonder what the Emirati minister thought.

But what many Lebanese thought was that Bassil had behaved in a nauseating way. Ziadeh has reached a level of qualification in her job that can serve as a model for young Lebanese. But after watching the video, how many of them would want to follow in her footsteps and work for ministers who get away with behaving so boorishly?

**Michael Young is opinion editor of THE DAILY STAR. He tweets @BeirutCalling.