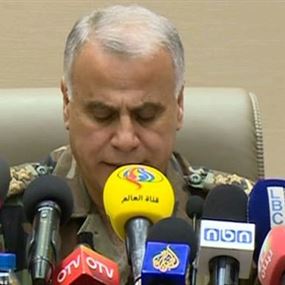 A warning to the Lebanese army
Diana Moukalled/Al Arabiya
Wednesday, 1 October 2014
Two videos that went viral in the last two weeks can summarize the current situation in Lebanon. The first one is the execution of the third Lebanese soldier from among the military personnel kidnapped by the Islamic State of Iraq and Syria (ISIS) and Jabhat al-Nusra Front terrorists. The video showed the latter murdering soldier Mohammad Hamieh as other soldiers collapsed and pleaded for their lives. The second video is that of Syrian refugees rounded up and being made to lie face down on the ground in the town of Arsal. Among them there appeared to be an amputee who was seemingly being kicked by a Lebanese soldier. The video also showed other purported soldiers kicking and humiliating the rest of the rounded up refugees. The Lebanese army did not deny the authenticity of this leaked video which indicated that the soldiers violated the army’s rules. “The army is apparently committing violations against refugees without any hesitation whatsoever ” Truth be told, the first video of the execution of Hamieh summarizes the situation of the hijacked Lebanese state whose decision making power has been confiscated. Meanwhile, the second video shows how the state attempts to cover its inability to confront the reasons behind its crisis, it seems as though it thinks that the only way to restore the balance is to mistreat refugees under the excuse of fighting terrorism.
Tyranny
The two examples are not the only incidents being relayed on the Internet. Photos of Lebanese army members beating up and humiliating Syrian refugees and destroying their belongings under the excuse of looking for wanted men continue to surface. Of course, the state aimed to promote the actions by saying they were performed under the guise of hedging against terrorism. It seems the trend of submitting to the military boot – which has become popular in several countries as it is considered salvation from chaos and extremism – is increasing in Lebanon. We have once again ignored a historical lesson which stipulates that insulting others and tyrannizing them is capable of producing terrorists of all kinds. Syrian refugees quickly responded to the second video of Lebanese army violations and protested in front of the Arsal municipality building, raising slogans of ISIS. Those in the Lebanese army command are making a fatal mistake if they think that the appeals of the kidnapped soldiers and the horrific footage gives them carte blanche to intimidate Syrian refugees.
The army is apparently committing violations against refugees without any hesitations whatsoever and so far nothing has happened to imply that these practices were individual violations. The army has neither announced that those responsible will be held accountable nor that an apology was made. More importantly, this happened with a lack of political and media coverage and disapproving voices remained faint. Perhaps there is a prevailing desire to fix Syria’s Baathist model in Lebanon.
But hold on, our dear Lebanese army. This is not how you protect a country. This is how you destroy it, or at least how you destroy what is left of it.