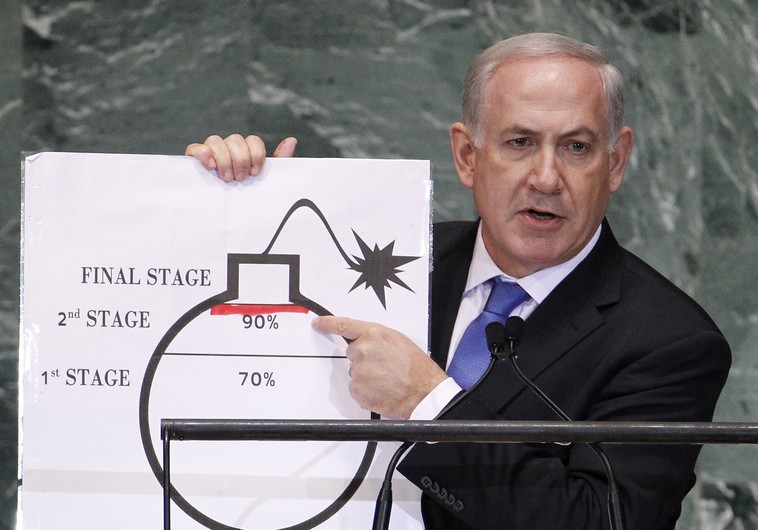 Analysis: Israel increasingly anxious over world’s flexibility to nuclear Iran
By YOSSI MELMAN/J.Post
09/29/2014
As Prime Minister Binyamin Netanyahu departed to address the UN General Assembly in New York on Sunday, and to meet with US President Barack Obama, the fear in Israel was mounting with regard to the warming ties between Iran and the United States. Amid the struggle against Islamic State, there were more and more indications that the US and the Western powers were willing to relax their position regarding Iran’s nuclear program. This impression became stronger following the reports that the US is coordinating with Iran in its aerial assaults on Islamic State in Iraq and Syria.
Israel is worried that the offers made to Iran in the negotiations over its nuclear program, which Iran has rejected as unsatisfactory, demonstrate the world powers’ willingness to accept the Islamic Republic as a “threshold nuclear power” just a screws-turn away from possessing a nuclear bomb. Israel’s anxiety was apparent on Wednesday when Intelligence Minister Yuval Steinitz revealed classified information with the permission of a military censor that is friendly to the government and more strict to the media. Steinitz revealed that Iran has used its Parchin military base as the site for secret tests of technology that could be used only for detonating a nuclear weapon.
The reason why Steinitz came out with the information was to influence the world powers in the nuclear talks to delay the signing of an agreement with Iran that will leave Iran with significant capabilities to enrich uranium. The negotiations with the powers – the US, France, Britain, Russia, Germany and China- are supposed to end with a permanent agreement in around two months. Over the last week, senior officials in the Obama administration have leaked some ideas that could form the basis of an agreement with Iran.
One idea is that Iranian centrifuges will not be dismantled but will rather be disconnected from the system that fuels them and connects them together. Another idea under consideration is to allow Iran to keep some 5000 centrifuges, which would put Tehran in a good position to enrich high level weapons-grade uranium in the future if it chose to do so. These offers that are unsatisfactory to Iran have infuriated Jerusalem.
Israel’s position was that in any agreement Iran would have to dismantle all its centrifuges or only be able to keep around 1000 which would prevent it from enriching uranium to a high level. The latest developments in the Middle East have hardened Iran’s bargaining positions in the nuclear talks. Iranian President Hassan Rouhani and the moderates around him are interested in a permanent agreement on the nuclear issue that will remove the painful sanctions against their economy.
On the other hand, as the masters of “bazaar-style” negotiating, Tehran senses that it can reach a better deal for Iran if it stands firm. Iran feels that the West wants to see it a de facto partner in the coalition that is forming against ISIS. Even the accomplishments of the Shi’ites in Yemen, who currently control large parts of the capital Sana’a, encourage the Iranians and give them hope that regional events and time are in their favor.
And because for Prime Minister Binyamin Netanyahu relations between Iran and Israel are a zero sum game, any Iranian achievement and any Western concession to Iran is a loss for Israel. In Netanyahu’s speech at the General Assembly on Monday and in his meeting with Obama, the prime minister will try to minimize the negative fallout for Israel. It is doubtful that he will succeed. The world knows that the military threats that Israel wielded successfully from 2011-2013 are no longer realistic.