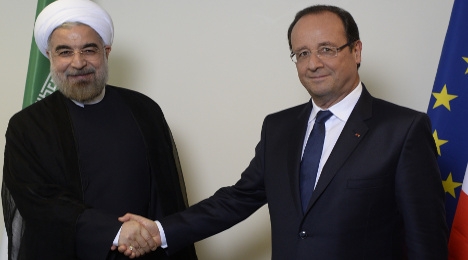 “France expects Iran to make concrete gestures to show that it renounces its military nuclear program, even if it has a right to a civilian program,” Hollande told the UN General Assembly.

The two presidents smiled for the cameras and shook hands before entering a 40-minute session at France’s United Nations mission.

In front of Iranian, French and European Union flags, Hollande praised “this first contact which calls for others,” while Rohani voiced hope for “a better future” in relations between the two countries.

The leaders met around a rectangular glass table at the office with a spectacular sunny view of New York’s East River, accompanied by French Foreign Minister Laurent Fabius and his Iranian counterpart Mohammad Javad Zarif, a US-educated diplomat seen as key in Rohani’s outreach efforts.

Rohani is paying a closely watched visit to the United Nations, three months after he swept to power on promises to ease tensions with the West and fix Iran’s battered economy.

“The question at hand is to know if these words can translate into actions, especially on the nuclear issue,” Hollande said at the General Assembly.

“For the past 10 years, talks haven’t gone anywhere,” he added.

Iran says that its sensitive nuclear work is meant for civilian purposes. But Western officials fear tha Iran may be working to build a nuclear bomb and Israel has not ruled out a military strike.

A US official said that the White House made tentative contact to arrange a historic meeting between Rohani and President Barack Obama, but the encounter became too “complicated” for the Iranian side.

Supreme leader Ayatollah Ali Khamenei has the ultimate say in Iran, although Rowhani said in a US television interview before his trip that he was fully empowered to negotiate on the nuclear row.

France, unlike the United States, has diplomatic relations with Iran, although it has also pressed Tehran over its nuclear program.

“I accepted dialogue with President Rohani as he himself has shown an openness,” Hollande said at a news conference.

“The dialogue has to be firm because, for France, there cannot be an acceptance of nuclear proliferation,” he said.

“This is an issue that isn’t tied to Iran but to global security,” he said.

The French president also talked to Rowhani about Syria, whose embattled president Bashar al-Assad counts Iran as a top ally.

Hollande reiterated that he did not oppose Rowhani’s presence at a future Geneva peace conference on Syria, but said that the focus had to be on transition from the Assad regime.

“If Iran wants to participate in Geneva Two, it has to be with a goal of transition,” Hollande said.

A French official said that Rowhani, in the discussion with Hollande, “said he hoped that the war would end” in Syria.

“He indicated that he was open on Geneva Two,” the official said.

The official said that Hollande and Rowhani also discussed developments in Lebanon, where Iran supports the Shiite movement Hezbollah.