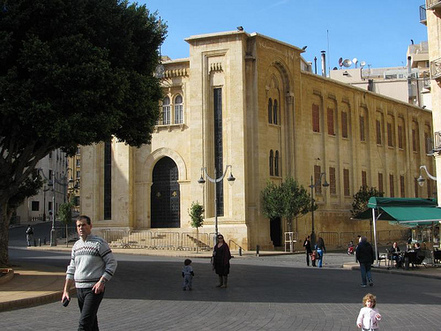 Baabda Remains Vacant 4 Months after Expiry of Suleiman’s Term
Naharnet/23/09/14
Parliament failed again on Tuesday to elect a new president over the boycott caused by the majority of the March 8 camp’s parliamentary blocs amid an initial agreement by March 14 alliance lawmakers to attend legislative sessions aimed at approving important draft-laws.
Speaker Nabih Berri adjourned the session to October 9 after lack of quorum
The same lawmakers, who have been boycotting the sessions aimed at electing a new head of state, failed to come to parliament on Tuesday.
However, the number of MPs attending the sessions has been declining after more than a dozen rounds failed to find a successor to President Michel Suleiman since his six-year tenure ended on May 25, leaving the country’s top Christian post vacant.
The majority of the March 8 alliance’s MPs have paralyzed the legislature over what they claim is the failure to agree with the rest of the blocs in the March 14 alliance on a compromise candidate.
But their boycott is a clear message of rejection to the candidacy of Lebanese Forces chief Samir Geagea, who is backed by the March 14 camp.
LF MP Antoine Zahra “regretted that the head of the presidency is severed by unmasked people.”
He said at the parliament ahead of the session that March 14 expressed readiness to exceptionally legislate to secure the highest interests of the country.
The alliance’s lawmakers in addition to the March 8 Change and Reform bloc had been boycotting legislative sessions under the excuse that the assembly cannot convene in the absence of a president.
Parliament’s bureau is expected to meet this week to set the agenda of the legislative session, which Berri has said would be held after Prime Minister Tammam Salam’s return from New York next week.
According to Berri, priority lies in discussing the public sector wage scale, as well as issuing Eurobonds, tackling budget-related affairs and the rent law.
LF MP George Adwan said after Berri set a new date for the election that the March 14 camp “decided to legislate because the other party forced us to do so as a result of its paralysis of parliament.”
Geagea also called in a series of tweets and a press conference for “deep solutions” to the country’s problems.
“The people should start with changing (things) and elect certain political platforms,” he said.
“The boycott has led to a vacuum and it will later lead to the election of the weakest possible candidate due to foreign meddling,” Geagea added.