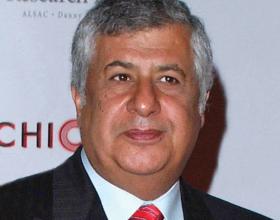 Unsavory Bedfellows
Following an “alleged offense,” which Lee Smith understood as a natural practice of free expression, Chaghoury intervened, leading to Lee’s detention for an hour by DC Metropolitan police.
Read below.

Unsavory Bedfellows
It’s not easy protecting the Christians of the Middle East.
The Weekly Standard
Sep 22, 2014, Vol. 20, No. 02
BY LEE SMITH

Last week, Senator Ted Cruz helped unmask an organization ostensibly founded to protect a Middle East minority. When the Texas legislator, the keynote speaker, asked the gala dinner audience comprising mostly Middle Eastern Christians at the In Defense of Christians conference in Washington to stand with Israel, many hooted and booed him off the stage. The hostility came as no surprise to me: When I found myself the night before in the same bar as a group of IDC speakers and organizers—at the Four Seasons in Georgetown—I ordered a bottle of champagne and had it sent to their table. Not long after, the D.C. Metropolitan Police detained me and a friend for an hour.
IDC’s proclaimed purpose—to protect Christians in the face of a jihadist onslaught led at present by ISIS—is of utmost importance. However, too many of the priests, prelates, and patriarchs from Lebanon, Syria, and Iraq, as well as one of the organization’s key benefactors, Lebanese-Nigerian billionaire Gilbert Chagoury, have also identified themselves as supporters of the Iranian axis in the Middle East. ISIS is a murderous group, but so is the regime in Tehran and so are its clients, chief among them Syria’s Bashar al-Assad and Hezbollah in Lebanon.
ISIS, as the world now knows all too well, has used beheadings, crucifixions, and all forms of murder and torture to terrorize its opponents, who include Christians, Yazidis, Alawites, Shiite Muslims, and Sunnis who don’t pledge fealty. But Assad’s record in Syria is no better. Besides the gas attacks and indiscriminate bombings that have killed tens of thousands of innocents, his security forces have specialized in acts of vindictive sadism. Early in the uprising, for instance, they mutilated the corpse of a 13-year-old boy before returning the body to his parents.
And yet many of the clerics invited to speak at the IDC conference are openly supportive of Assad. For instance, Maronite patriarch Bechara Boutros al-Rai calls Assad a reformer. Maybe he took that message to the White House when he met with Obama and Susan Rice Thursday afternoon to ask for continued American support for the Lebanese Armed Forces, even if its military intelligence unit is controlled by Hezbollah. But whatever is wrong with Hezbollah or Assad, many of the IDC clerics reason, at least they’re killing the Sunni extremists who would kill them.
I referenced this conception of Assad’s role in the note I sent along with the champagne: “Thanks IDC—and thanks Bashar al-Assad, ‘Protector of Christians’! XOXOXO.” I asked the waitress to deliver the bottle directly to Chagoury, who according to leaked U.S. diplomatic cables has supported Michel Aoun, Hezbollah’s key Christian ally in Lebanon. A 2007 cable also explains that Chagoury is close to Suleiman Franjieh Jr., another pillar of Lebanon’s pro-Damascus, pro-Hezbollah March 8 political coalition and a man who calls Assad his friend and brother. Former prime minister of Lebanon Fouad Siniora suggested to then U.S. ambassador to Lebanon Jeffrey Feltman “that the U.S. deliver to Chagoury a stern message about the possibility of financial sanctions and travel bans against those who undermine Lebanon’s legitimate institutions.”
My friend noticed that the bottle was returned to the bar unopened. So there would be no thanks, sarcastic or otherwise, or insults. We left, disappointed, and got into a taxi. A policeman stopped the cab and told us to get out. His partner pulled out the note and asked if I’d written it. Of course, I said. The recipient, she explained, perceived it as a threat.
This was now getting interesting. A man who was a confidant of Sani Abacha, head of one of the bloodiest and most corrupt regimes in modern African history, and friends with Lebanese warlords like Nabih Berri thought that a note accompanying a bottle of champagne was threatening.
They can’t take a joke at their expense because usually they don’t have to, my friend said. With them it’s always the principle of “Do you know who I am?” This is what happens when you mess with a powerful man, one of the richest men in the world. However, my friend continued, this is not Nigeria or Lebanon—there are no thugs and militias waiting in the wings. This is the United States of America.
The police asked us to wait while they talked with Chagoury and his party. He’s a big Clinton donor. Who knows? Maybe he had lawyers calling in to the police. After about half an hour, someone with the Chagoury gang walked out from the hotel lobby and circled around to get a look at us. The guy looked just like Samir Kassir, a Lebanese journalist I met once when I lived in Beirut. But then I remembered it couldn’t be him: Kassir was on the other side. For opposing the Assad/Hezbollah condominium over Lebanon supported by the likes of Chagoury, Kassir was killed with a car bomb in 2005.
What happens under the hoods of Lebanese cars, what goes on in Nigerian prisons, is the province of men like Chagoury and their political patrons. This is the capital of the free world. After an hour, too long by any reckoning, the cops sent us on our way, happy to be reminded on the eve of 9/11 that as Americans we stand with our friends around the region of all faiths, Christian, Jewish, and Muslim, who believe in what we believe in and fight for what we too often take for granted—the right to express oneself freely, the obligation to mock those who stand with murderers.
Lee Smith is a senior editor at The Weekly Standard.