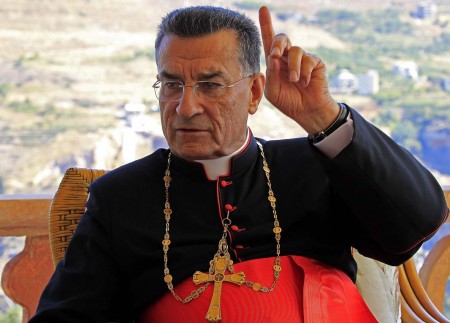 Has Pro-Christian Conference Been Hijacked by Pro-Iran/Hezbollah Dhimmis?

A group of Christian activists in the United States is warning that an upcoming summit about Christianity in the Middle East is not what it appears to be.

The summit, organized by a newly formed group called “In Defense of Christians,” may look like a pro-Christian conference intended to promote the cause of religious freedom in the Middle East.

But according to some, the event organizers are using massacres and expulsions of Christians and Yazidis by Sunni extremists in Syria and Iraq in order to promote the interests of Iran and its Mideast clients – the Assad regime in Syria and Hezbollah in Lebanon.

This warning has been offered by the Middle East Christian Committee (MECHRIC), a consortium of activists from the Assyrian, Syriac, Chaldead, Maronite, Coptic, and Melkite groups in the United States.

MECHRIC warns that In Defense of Christians (IDC) is not playing it straight with the American public in its activism. MECHRIC says that instead of promoting the cause of religious freedom, the organization is using Sunni violence against Christians to promote support for Assad in Syria and normalization with the Mullahs in Iran – even if they’re not aware of it.

Most of the people involved in the Conference (which opens today in Washington, D.C., and runs until Thursday) are sincere, reports John Hajjar, a member of MECHRIC’s executive committee. “However, the American public must be informed,” he says. “While the narrative of the IDC is directed at ISIS violence, the conference is, intentionally or not, profiting the Iranian and Syrian regimes and Hezbollah.”

Hajjar admits that the charge is a stunning one, but asserts that the pattern of evidence supports the allegation.

In Defense of Christians has been particularly aggressive in drawing attention to the misdeeds of ISIS in Syria and Iraq, but has been relatively quiet about the abuse and murder of Christians by Iran, Syria, and Hezbollah, he says.

“No Middle East Christians opposed to Iran, Assad, and Hezbollah will be speaking [at the conference],” he said.

On this score, the evidence seems to support Hajjar’s concerns. In Defense of Christians’ website initially made no mention of the well-known abuse of Christians and other religious minorities in Iran, which is regarded as one of the most repressive regimes in the world.

After an entry at CAMERA’s blogsite, Snapshots, drew attention to the IDC’s silence about the mistreatment of Christians in Iran, IDC added a brief entry on the subject to its website, but even this entry downplayed the problem.

The organization’s website depicts Syria as a historically safe place for Christians (at least prior to that country’s civil war) but makes no mention of the Assad regime’s role in the assassination of Christian leaders in Lebanon and its support for Hezbollah, which serves as Assad’s proxy in that country.

“Two Christian presidents, many Christian ministers, members of the parliament, and students were killed by the Assad regime, but the conference has ignored this tragedy and no speaker is slated to address the issue,” Hajjar warns.

“The conference is surely condemning the Jihadists of ISIS, but is ignoring the oppression by the Iranian regime against its own Christian community, particularly the Iranian Persian Christians,” Hajjar said.

The upcoming conference, which is billed as an effort to promote unity on behalf of Christians in the Middle East, has also failed to obtain the support of legitimate Coptic activists in the United States, Hajjar reports.

“Coptic Solidarity, the largest international federation of Egyptian Christians, is not speaking [at the conference],” Hajjar reports, adding that the IDC only invited a woman involved in orphanage activists to speak. “The organizing team wanted to secure the name ‘Copt,’ but not the actual Coptic people,” he said.

In addition, the IDC failed to enlist the support of the the MECHRIC committee to which Hajjar belongs. “Why?” Hajjar asked rhetorically. “Because MECHRIC condemns the Salafi Jihadists as well as the Iranian regime and Hezbollah.”

Many people will attend the conference because of the presence of a number of Christian patriarchs from the Middle East, but Hajjar wonders if these leaders will condemn Shiite and Shiite-supported perpetrators of anti-Christian violence. “Will they criticize the Tehran-Damascus regimes?” he asks.

Maybe not. One of the conference speakers, Patriarch Cardinal Mar Bechara Boutros Raï, a Maronite from Lebanon, reportedly stated on August 23, that he would align himself with Hezbollah in a common cause against ISIS. And on Saturday, September 6, he blamed Israel for sectarian conflict between Sunnis and Shias.

Questions Asked in Lebanon About Conference

The conference has also attracted the attention and generated some criticism in a French language newspaper, L’Orient Le Jour. On August 28, the paper published an article asking if the summit was intended to promote the interests of Tehran and Damascus.

The paper reported that one of the backers of IDC’s conference was Gilbert Chagoury, a Lebanese businessman who was born in Nigeria and made his fortune in that country.

The Wall Street Journal reports that Chagoury was close to Nigeria’s military dictator Sani Abacha, and that because of his association, Abacha, “helped him land lucrative business contracts in construction and other areas.” After Abacha’s death, Chagoury was forced to return $300 million to that country to unfreeze his bank accounts.

And PBS’s Frontline reports that in 2004, Chagoury was on the verge of being arrested by Nigerian authorities as his private jet prepared to land at an airfield in Nigeria, but was able to avoid capture. (A Nigerian prosecutor stated Chagoury was probably tipped off by an employee at the airport, allowing him to escape.)

Five days after the publication of the article, the publisher of L’Orient Le Jour, Michel Eddé, published another article, praising the businessman and the IDC conference effusively.

“I regret that some ill-intentioned individuals have misled some of our newspaper editors to question the good faith of Gilbert Chaghoury in an article a few days ago. That’s why I published this development,” Eddé stated.

Multiple efforts to elicit a response from IDC – by phone and email – have proven unsuccessful.

Dexter Van Zile (@dextervanzile) is Christian Media Analyst for the Committee for Accuracy in Middle East Reporting in America (@cameraorg).