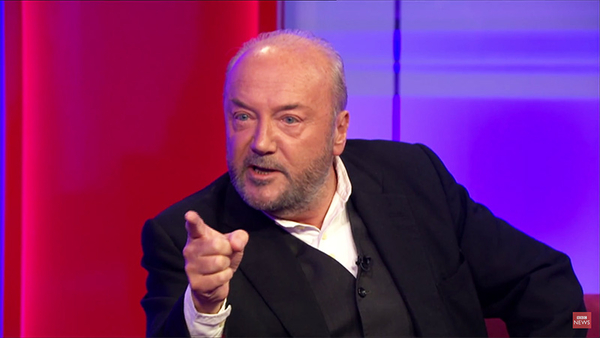 Galloway was expelled from the Labour Party in 2003 after an internal inquiry found that he had “incited Arabs to fight British troops,” and “incited British troops to defy orders.”

On May 7, the British Respect Party politician George Galloway lost his parliamentary seat of Bradford West. Despite winning a 2012 election with 55.9% of the vote, Galloway received only 21.2% in last month’s elections, thereby losing decisively to his opponent, the Labour Party’s Naseem Shah.

Galloway’s defeat was met with some applause. People cheered for different reasons. For Bradford’s electorate, it was Galloway’s voting attendance in parliament: the third-lowest of all Britain’s MPs. For the Jewish community, it was Galloway’s reputation as Britain’s most pro-Hamas, anti-Israel politician. For women’s rights activists, it was Galloway’s claim that the rape allegations against Wikileaks founder Julian Assange was all simply a case of “bad sexual etiquette.” And for opponents of the Syrian and Iranian regimes, it was Galloway’s paid employment by the Iranian state-owned television station, Press TV, as well as the pro-Assad and pro-Hezbollah station, Al Mayadeen.

Galloway is well aware of his detractors, whom he condemns in colourful terms. After his defeat, he declared: “The venal and the vile, the racists and the Zionists will all be celebrating. The hyena can dance on the lion’s grave, but it can never be a lion.”

Galloway is also known for his support of totalitarian regimes. In 2013, after he asked David Cameron why the British government was supporting the “bloodthirsty” Syrian opposition, the Prime Minister responded: “Some things come and go, but one thing is certain. Wherever there is a brutal Arab dictator in the world, he’ll have the support of the honourable gentleman.”

Although Galloway has lost his parliamentary seat, this is by no means the end of his political career. As his biographer notes: “He has dedicated himself to politics, but it’s his job, his bread and butter, and he won’t be wanting to retire any time soon.”

Galloway’s concession speech on May 7, in fact, concluded with the promise: “I’m going off now to plan my next campaign.”

The next campaign, Galloway revealed a few weeks later, is the 2016 London mayoral race.

In an interview with the BBC, Galloway explained:

“It’s been a very good start. 20,000 people have signed up for the campaign in three days. … I’ve lived in London for 35 years … I have every right to put my hat in the ring here. And all the signs are that it’s, if I dare use this metaphor, putting the cat among the pigeons.”

Unlike most MPs, since 1987, Galloway has served as MP for four separate constituencies, in Scotland, London and Bradford. He was expelled from the Labour Party in 2003, after an internal inquiry found that he had “incited Arabs to fight British troops,” and “incited British troops to defy orders.”

After being expelled, Galloway founded the Respect Party, which journalist Nick Cohen of The Observer described as an “alliance… between the Trotskyist far left and the Islamic far right.”

For the 2005 election, Galloway set his political sights on Bethnal Green and Bow, an East London constituency with a high proportion of Muslim residents. Cashing in on his “anti-war” reputation, Galloway rallied Islamist organizations to his cause.

Britain’s most prominent Muslim Brotherhood organization, the Muslim Association of Britain, put its full weight behind the Respect Party. It recruited Islamist campaigners and “well-connected local mosque workers” to campaign for Galloway.

Islamist groups belonging to Jamaat-e-Islami, the violent South Asian Islamist movement, also pledged their support. Activists from the Islamic Forum of Europe, the East London Mosque and the Young Muslim Organisation allied with “mostly white socialists to successfully campaign for the election of the Respect Party candidate.”

The black Jewish Labour candidate, Oona King, claimed that Respect Party campaigners had been warning residents not to vote for her because she is Jewish.

Galloway defeated the Labour candidate by a mere 823 votes. Nevertheless, by exploiting the sentiments of many in the Muslim community, and enlisting the support of some Islamist community organizers, it became clear that he could win elections in areas with large Muslim populations.

When he turned his attention to the northern city of Bradford in 2012, Galloway once again enlisted the support of Islamist groups. Members of the Islamic Forum of Europe campaigned for him, as did members of the Muslim Public Affairs Committee (MPAC).

In 2012, the National Union of Students banned MPAC from taking part in events on university campuses. The All-Party Parliamentary Inquiry into Anti-Semitism has condemned the group for promoting “the idea of a worldwide Zionist conspiracy, including the reproduction of articles originally published on neo-Nazi and Holocaust Denial websites.” MPAC has campaigned against other Labour MPs simply on the grounds that they were “Jewish.”

Faced with a significant number of Pakistani and Kashmiri Muslim voters, Galloway worked to tap religious and cultural tensions.

Galloway’s Respect Party won votes because it “simultaneously circumvented and harnessed” the biraderi system, a hierarchical arrangement of clan politics under which much of Britain’s Pakistani communities is organized. Galloway’s close aide, Ron McKay, told one journalist: “It would take me much longer than I’ve got to explain biraderi politics in Bradford, clan-based politics, and people actually do deliver 20, 30, 50 votes. Through their extended families, what tends to happen is, the kind of head of the household, or the kind of head of the clan, makes a decision how they’ll vote. … They deliver bundles of votes.”

The piety of Galloway’s opponent was also questioned. Anonymous election leaflets distributed in Bradford contained the text: “Let me point out to all the Muslim brothers and sisters what I stand for. I, George Galloway, do not drink alcohol and never have. Ask yourself if the other [Labour] candidate in this election can say that truthfully. I, George Galloway, have fought for the Muslims at home and abroad, all my life, and paid a price for it. I, George Galloway, hold Pakistan’s highest civil awards.”

Further, Galloway told a campaign rally: “I’m a better Pakistani than he [the Labour candidate] will ever be. God knows who’s a Muslim and who is not. And a man that’s never out of the pub shouldn’t be going around telling people you should vote for him because he’s a Muslim. A Muslim is ready to go to the US Senate, as I did, and to their face call them murderers, liars, thieves and criminals.”

Similar tactics were used in the 2015 elections. At an election hustings, Galloway accused the Labour candidate, Naseem Shah, of lying about her claim to have suffered a forced marriage. Galloway produced a nikah, an Islamic marriage certificate, to back up his claims. In response, Shah claimed that Galloway had sent someone to Pakistan to impersonate her dead father, just in order to obtain the nikah.

A Jewish reporter, Ben Judah, visited Bradford in May to interview Respect Party officials, only to be physically attacked by Respect supporters, who shouted, “Get out, you fucking Jew.”

Now Galloway has turned his attention to London again.

The London mayoralty, a position established in 2000, certainly attracts characters. Since then, London has had two mayors, Ken Livingstone and Boris Johnson.

Livingstone is widely considered to sit on the fringe of the Labour Party. Like Galloway, he has worked closely with a number of Islamist groups. Livingstone was roundly condemned for his decision, while Mayor, to invite to London the Muslim Brotherhood cleric Yusuf Al-Qaradawi. Qaradawi has expressed support for suicide bombings and Hitler’s persecution of the Jews, and has sanctioned domestic abuse of “disobedient” wives.

Boris Johnson shares none of Galloway or Livingstone’s fondness for theocrats or extremist groups. Although he has frequently been described by media as an “eccentric,” the London electorate has thus far rewarded unusual candidates. This time around, the other mainstream contenders all seem a bit forgettable. As Galloway himself notes, “With a bland field from the mainstream parties, someone a bit more interesting might just take it by storm.”

As with Galloway’s previous election campaigns, the mayoral race is likely to see a similar mobilization of Islamist groups, which Galloway will use to canvass Muslim votes. He will be able to rely on a large network of mosques run by operatives from the Muslim Brotherhood and Jamaat-e-Islami, as well as Islamist campaign groups, community organizations and youth groups.

Nevertheless, Galloway cannot depend on London’s Muslims alone. There are plenty of Sunni Muslim residents who distrust Galloway’s work with the Syrian and Iranian regimes. Some will also look to the apparent disenchantment of the Bradford Muslims who voted Galloway out of office. South Asian Muslims might also oppose Galloway because they reject the politics of Jamaat-e-Islami, a socially conservative Pakistani movement of his Islamist ally. Together with the Muslim Brotherhood, the Jamaat-e-Islami only manages a modest 3.4% of British mosques.

To win, Galloway needs the support of those voters who would usually vote for the Labour Party. The increasing discontent in London with the ruling Conservative government, as well as a noticeably disorganized Labour Party, will all strongly benefit Galloway’s mayoral campaign. “I have an appeal to traditional Labour people,” he argues, “of whom there are many millions in London.”

A Mayor Galloway could be greatly damaging for London’s moderate Muslims and its Jewish community. There is the possibility that huge amounts of taxpayers’ money would likely find its way into the pockets of anti-Semitic and extremist organizations aligned with Jamaat-e-Islami, the Muslim Brotherhood and Hamas.

In a recent interview with the BBC about his mayoral bid, Galloway declared: “It would certainly be my aim to encourage the huge swell of pro-Palestinian support in London.”

Under a Galloway mayoralty, there is also the possibility that Islamist operatives would be appointed to important political positions, further legitimizing extremist control over London’s Muslims.

George Galloway claims to stand for “peace, justice and equality.” His track record, however, suggests that tolerance and integration will not be the likely outcome of a Galloway mayoralty.