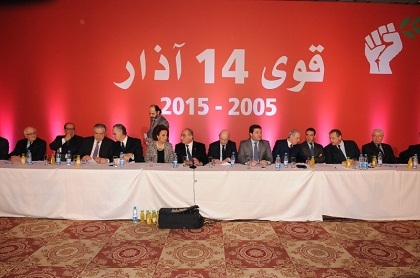 March 14 announces new ‘national council’
The Daily Star/Mar. 14, 2015 /BEIRUT: The March 14 secretariat announced Saturday the creation of a “national council” and a preparation committee to develop the bloc’s new political platform. “The General Secretary announces the creation of the National Council for March 14 forces,” Fares Soueid, the head of March 14’s secretariat, announced Saturday. “Every person who attended this conference will be automatically assigned as a member of the council’s general assembly.”The announcement came after a speech by former Prime Minsiter Fouad Siniora, according to the bloc’s official statement at the group’s annual conference. Celebrating the 10th anniversary of the “Cedar Revolution” movement that ended the Syrian military presence in Lebanon, the conference was held at BIEL, Downtown Beirut. Soueid announced that a preparation committee has been formed to prepare the new bylaws and political platform for March 14 within a deadline of two months. The committee’s members included MPs Marwan Hamadeh, Fadi Karam, Joseph Maalouf, Jean Ogassapian, Ahmad Fatfat and other officials and activists from factions affiliated with March 14. After the end of the conference, Fatfat expressed dissatisfaction with the fact that the committee did not include “even one single woman.”Soueid responded by saying that a woman named Zeina Mansour volunteered to join the committee as he ended the announcement. In the official statement read by Siniora, March 14 reiterated the principles on which the coalition was founded and attacked the rival political camp led by Hezbollah. “The Persian plan wishes to engage the region in a war, by creating a clash between Sunnis and Shiites,” Siniora said. He accused Iran of causing turmoil in the region for the sake of using it as a chip “on international negotiations tables.” Siniora slammed Hezbollah for participating in wars outside Lebanon and thus involving Lebanon in regional conflicts, and accused the party of intentionally extending presidential vacuum. March 14 also denounced the Syrian regime as being the “center of terrorism” in the region and accused it of committing crimes against humanity.  The statement also warned about the increasingly high number of Syrian refugees in Lebanon, who have become “a burden and a threat.”

March 14 Forms National Council: Hizbullah Prolonging Vacuum, Persian Scheme Dragging Region to War
Naharnet/14.03.15
The March 14 forces announced Saturday the formation of a National Council comprising political parties, independents and civil society activists, following a closed-door conference marking the tenth anniversary of the coalition’s birth.
“We have decided to form a National Council comprising political parties, independents and civil society activists. A preparatory committee will be tasked with devising a March 14 plan of action for the coming period and to draft the by-laws,” the coalition said in a statement recited by ex-PM Fouad Saniora after the rally at the BIEL center in Beirut.
March 14 General Secretariat Coordinator Fares Soaid said “anyone who took part in this conference will be automatically considered a member of the general assembly” of the National Council.
“We meet here today 10 years after your uprising in the face of the tyranny that assassinated the best of our symbols,” the conferees said in a closing statement, addressing the Lebanese people.
“We tell the Arab and international public opinion that we were resilient and we preserved a civil, modern and cross-confessional movement,” they added.
“We committed mistakes and we achieved success, but we preserved our resolve. March 14 is looking forward to the future of Lebanon and the region, which we want to create with our hands, instead of leaving it a hostage to a so-called empire,” the coalition said in the statement, referring to Iran’s growing influence in the region.
The conferees stressed that “Lebanon’s future belongs to the Lebanese.”“We will not give up our constitution and state, which alone must monopolize the use of force and arms in line with the applicable laws. We won’t allow anyone to defeat us and we don’t want to defeat anyone,” the coalition declared.“We want the return of everyone to the state, not under preconditions, but according to the Constitution, and this should start through the election of a president,” it added.
In a jab at Tehran, the conferees warned that “the Persian scheme is seeking to drag the region into a war and ignite a Sunni-Shiite conflict, as if the people of the region are fuel for its interests.”
“Everyone is aware of the role of Iran and its proxies, topped by Hizbullah, which is implicating Lebanon and seeking to prolong the presidential vacuum,” the conferees added. They cautioned that the Lebanese state can no longer secure the “continuity of its institutions and it is unable to find solutions.” As for the Syrian crisis, the March 14 coalition said “the regime’s crimes triggered a huge wave of sectarian and ethnic tensions and paved the way for extremism claiming to defend Islam.”
“Terrorism is threatening the entire world and at the core of this terrorism is the Syrian regime, which is committing crimes against humanity,” the conferees added. “Today we launch a new dynamism that is aimed at containing the repercussions of violence. We call for the partnership of Muslims and Christians in running the affairs of a civil state, which is unique in this Islamic world,” they said. The coalition called on the Lebanese to communicate with “the forces of moderation in the world.”
“We call on the Lebanese who drew lessons from the war to communicate and show solidarity to curb the violence that is being practiced by those who have not ‘left their caves’ — those who are playing the game of extremism and elimination,” it said.
It also urged the Lebanese to “revive the coexistence example in a region that it being invaded by violence.”Turning to the situation in the region, the coalition underlined that “this Orient is in critical need for efforts aimed at finding a just and comprehensive solution to the Palestinian cause.”The coalition was established in March 2005 in the aftermath of the assassination of former Prime Minister Rafik Hariri, which was largely blamed on the Syrian regime at the time.
On March 14, 2005, a month after Hariri’s murder, hundreds of thousands of Lebanese flocked to downtown Beirut to demand the withdrawal of Syrian troops from Lebanon after a nearly 29-year presence. The mass rally was later dubbed the Cedar Revolution or Independence Uprising. The Syrian withdrawal did take place in April of that year. In 2007, the Special Tribunal for Lebanon, a U.N.-backed court, was established to prosecute and try Hariri’s killers.
The STL is now trying five Hizbullah members in absentia over their alleged involvement in the murder. The trial opened in The Hague in January 2014. Hizbullah chief Sayyed Hassan Nasrallah has dismissed the court as a U.S.-Israeli scheme and vowed that the accused will never be found.