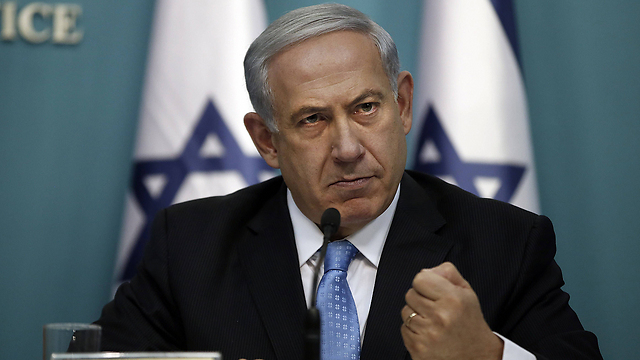 Thank you. Wow, 16,000 people. Anyone here from California? Florida? New York? Well, these are the easy ones.

How about Colorado? Indiana? I think I got it. Montana? Texas? You’re here in record numbers.

Thank you Bob Cohen, Michael Kassen, Howard Kohr and all the leadership of AIPAC. Thank you for your tireless, dedicated work to strengthen the partnership between Israel and the United States. I want to thank, most especially, Members of Congress, Democrats and Republicans. I deeply appreciate your steadfast support for Israel, year in, year out. You have our boundless gratitude.

I want to welcome President Zeman of the Czech Republic. Mr. President, Israel never forgets its friends. And the Czech people have always been steadfast friends of Israel, the Jewish people, from the days of Thomas Masaryk at the inception of Zionism.

You know, Mr. President, when I entered the Israeli army in 1967, I received a Czech rifle. That was one of the rifles that was given to us by your people in our time of need in 1948. So thank you for being here today.

Also here are two great friends of Israel, former Prime Minister of Spain Jose Maria Aznar and as of last month, former Canadian Foreign Minister John Baird. Thank you both for your unwavering support. You are true champions of Israel, and you are, too, champions of the truth.

I also want to recognize the U.S. Ambassador to Israel, Dan Shapiro, for your genuine friendship, Dan, and for the great job you’re doing representing the United States and the State of Israel.

And I want to recognize the two Rons. I want to thank Ambassador Ron Prosor for the exemplary job he’s doing at the U.N. in a very difficult forum.

And I want to recognize the other Ron, a man who knows how to take the heat, Israel’s ambassador to the United States, Ron Dermer. Ron, I couldn’t be prouder to have you representing Israel in Washington.

And finally, I want to recognize my wife, Sara, whose courage in the face of adversity is an inspiration to me. Sara divides her time as a child psychologist, as a loving mother, and her public duties as the wife of the prime minister. Sara, I’m so proud to have you here with me today, to have you with me at my side always.

My friends, I bring greetings to you from Jerusalem, our eternal undivided capital. And I also bring to you news that you may not have heard. You see, I’ll be speaking in Congress tomorrow.

You know, never has so much been written about a speech that hasn’t been given. And I’m not going to speak today about the content of that speech, but I do want to say a few words about the purpose of that speech.

First, let me clarify what is not the purpose of that speech. My speech is not intended to show any disrespect to President Obama or the esteemed office that he holds. I have great respect for both.

I deeply appreciate all that President Obama has done for Israel, security cooperation, intelligence sharing, support at the U.N., and much more, some things that I, as prime minister of Israel, cannot even divulge to you because it remains in the realm of the confidences that are kept between an American president and an Israeli prime minister. I am deeply grateful for this support, and so should you be.

My speech is also not intended to inject Israel into the American partisan debate. An important reason why our alliance has grown stronger decade after decade is that it has been championed by both parties and so it must remain.

Both Democratic and Republican presidents have worked together with friends from both sides of the aisle in Congress to strengthen Israel and our alliance between our two countries, and working together, they have provided Israel with generous military assistance and missile defense spending. We’ve seen how important that is just last summer.

Working together, they’ve made Israel the first free trade partner of America 30 years ago and its first official strategic partner last year. They’ve backed Israel in defending itself at war and in our efforts to achieve a durable peace with our neighbors. Working together has made Israel stronger; working together has made our alliance stronger. And that’s why the last thing that anyone who cares about Israel, the last thing that I would want is for Israel to become a partisan issue. And I regret that some people have misperceived my visit here this week as doing that. Israel has always been a bipartisan issue.

Israel should always remain a bipartisan issue. Ladies and gentlemen, the purpose of my address to Congress tomorrow is to speak up about a potential deal with Iran that could threaten the survival of Israel. Iran is the foremost state sponsor of terrorism in the world. Look at that graph. Look at that map. And you see on the wall, it shows Iran training, arming, dispatching terrorists on five continents. Iran envelopes the entire world with its tentacles of terror. This is what Iran is doing now without nuclear weapons. Imagine what Iran would do with nuclear weapons.

And this same Iran vows to annihilate Israel. If it develops nuclear weapons, it would have the means to achieve that goal. We must not let that happen.

And as prime minister of Israel, I have a moral obligation to speak up in the face of these dangers while there’s still time to avert them. For 2000 years, my people, the Jewish people, were stateless, defenseless, voiceless. We were utterly powerless against our enemies who swore to destroy us. We suffered relentless persecution and horrific attacks. We could never speak on our own behalf, and we could not defend ourselves.

The days when the Jewish people are passive in the face of threats to annihilate us, those days are over. Today in our sovereign state of Israel, we defend ourselves. And being able to defend ourselves, we ally with others, most importantly, the United States of America, to defend our common civilization against common threats.

So we defend ourselves and in so doing, create the basis of a broader alliance.

And today, we are no longer silent; today, we have a voice. And tomorrow, as prime minister of the one and only Jewish state, I plan to use that voice.

I plan to speak about an Iranian regime that is threatening to destroy Israel, that’s devouring country after country in the Middle East, that’s exporting terror throughout the world and that is developing, as we speak, the capacity to make nuclear weapons, lots of them.

Ladies and gentlemen, Israel and the United States agree that Iran should not have nuclear weapons, but we disagree on the best way to prevent Iran from developing those weapons. Now disagreements among allies are only natural from time to time, even among the closest of allies. Because they’re important differences between America and Israel. The United States of America is a large country, one of the largest. Israel is a small country, one of the smallest. America lives in one of the world’s safest neighborhoods. Israel lives in the world’s most dangerous neighborhood. America is the strongest power in the world. Israel is strong, but it’s much more vulnerable. American leaders worry about the security of their country. Israeli leaders worry about the survival of their country.

You know I think that encapsulates the difference. I’ve been prime minister of Israel for nine years. There’s not a single day, not one day that I didn’t think about the survival of my country and the actions that I take to ensure that survival, not one day. And because of these differences, America and Israel have had some serious disagreements over the course of our nearly 70-year-old friendship.

Now, it started with the beginning. In 1948, Secretary of State Marshall opposed David Ben-Gurion’s intention to declare statehood. That’s an understatement. He vehemently opposed it. But Ben-Gurion, understanding what was at stake, went ahead and declared Israel’s independence.

In 1967, as an Arab noose was tightening around Israel’s neck, the United States warned Prime Minister Levi Eshkol that if Israel acted alone, it would be alone. But Israel did act — acted alone to defend itself.

In 1981, under the leadership of Prime Minister Menachem Begin, Israel destroyed the nuclear reactor at Osirak. The United States criticized Israel and suspended arms transfers for three months. And in 2002, after the worst wave of Palestinian terror attacks in Israel’s history, Prime Minister Sharon launched Operation Defensive Shield. The United States demanded that Israel withdraw its troops immediately, but Sharon continued until the operation was completed. There’s a reason I mention all these. I mention them to make a point. Despite occasional disagreements, the friendship between America and Israel grew stronger and stronger, decade after decade.

And our friendship will weather the current disagreement, as well, to grow even stronger in the future. And I’ll tell you why; because we share the same dreams. Because we pray and hope and aspire for that same better world; because the values that unite us are much stronger than the differences that divide us values like liberty, equality, justice, tolerance, compassion.

As our region descends into medieval barbarism, Israel is the one that upholds these values common to us and to you.

As Assad drops bell bombs on his own people, Israeli doctors treat his victims in our hospitals right across the fence in the Golan Heights As Christians in the Middle East are beheaded and their ancient communities are decimated, Israel’s Christian community is growing and thriving, the only one such community in the Middle East.

As women in the region are repressed, enslaved, and raped, women in Israel serve as chief justices, CEOs, fighter pilots, two women chief justices in a row. Well, not in a row, but in succession. That’s pretty good. In a dark, and savage, and desperate Middle East, Israel is a beacon of humanity, of light, and of hope.

Ladies and gentlemen, Israel and the United States will continue to stand together because America and Israel are more than friends. We’re like a family. We’re practically mishpocha.

Now, disagreements in the family are always uncomfortable, but we must always remember that we are family.

Rooted in a common heritage, upholding common values, sharing a common destiny. And that’s the message I came to tell you today. Our alliance is sound. Our friendship is strong. And with your efforts it will get even stronger in the years to come.