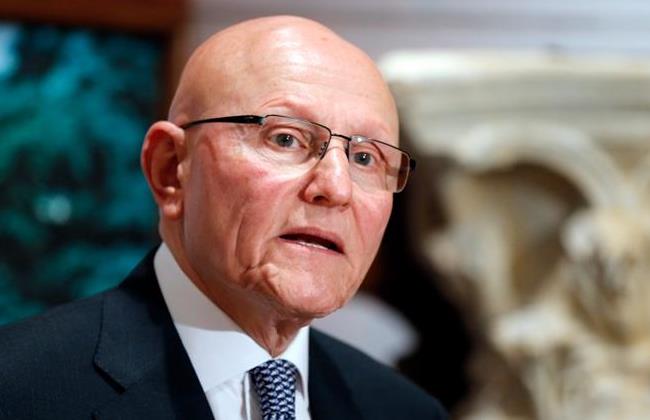 Hezbollah does not represent Lebanon’s government: Information Minister
Beirut, Asharq Al-Awsat—29.01.15
Lebanon’s government is seeking to “minimize” the repercussions of the latest standoff between Israel and Hezbollah along Lebanon’s southern borders, Lebanese Information Minister Ramzi Jarih told Asharq Al-Awsat on Wednesday.
Jarih did not rule out a strong Israeli military response along the lines of the 2006 Lebanon War but called for both Israel and Hezbollah to demonstrate “self-restraint” in the wake of fighting between Israel and Hezbollah, resulting in the deaths of two Israeli soldiers and a Spanish peacekeeper on Wednesday after Hezbollah fired anti-tank missiles at an Israeli military convoy in a disputed border zone. The attack was in retaliation for an Israeli airstrike on Hezbollah fighters inside Syria earlier this month, the group said.
The border was calm on Thursday, but Israeli forces remain on high alert following the deadliest escalation of tensions since the brief war between Israel and Hezbollah in 2006.
The state-owned Lebanese National News Agency reported that Israeli warplanes were flying low over border villages on Thursday, while Israeli Defense Minister Moshe Yaalon cautioned that Israel’s military is “ready for any development” despite receiving an anti-escalation message from Hezbollah.
Yaalon said that Tel Aviv had received a message from Hezbollah, via the UN peacekeeping mission in southern Lebanon, that it did not want further escalation following Wednesday’s retaliatory attack. Speaking on Thursday, Yaalon said: “I can’t say whether the events are behind us. Until the area completely calms down, the Israel Defense Force will remain prepared and ready.” Israeli troops also resumed a search for possible Hezbollah tunnels in the border region, local media reported. In comments to Asharq Al-Awsat, Lebanon’s information minister acknowledged that Hezbollah is part of the Beirut government, but stressed that its latest military action in the border region was not endorsed by the government. He added that Lebanon’s government, which remains without a president following a protracted political standoff, will meet later on Thursday to discuss the issue. “Yes, Hezbollah is part of the government and so we will listen to the viewpoint of its minister in Thursday’s meeting, while confirming that Hezbollah’s positions do not represent the official position of Lebanon as represented by the prime minister and government,” Jarih said.

Lebanese Cabinet condemns Israeli response to Hezbollah revenge attack
Hasan Lakkis/The Daily Star/Jan. 29, 2015/BEIRIUT
The latest wave of violence along the Lebanon-Israel border was Cabinet’s main topic of discussion Thursday, as it called on parties to prevent any escalation that would implicate Lebanon in a new war with its southern neighbor. After the session, Information Minister Ramzi Joreige said that Prime Minister Tammam Salam had voiced his desire to preserve the security and stability in south Lebanon after Israel responded Wednesday to a revenge attack by Hezbollah that killed two Israeli soldiers and wounded seven.  The attack, with a salvo of anti-tank missiles on an Israeli military convoy in the occupied Shebaa Farms area, was answered by artillery fire from the Israelis.
According to Joreige, Salam condemned the Israeli response and urged all parties to avoid any escalation. “Don’t give Israel any chance to drag us in to war,” the information minister quoted Salam as saying. On Wednesday Salam had voiced Lebanon’s commitment to U.N. resolution 1701 that ended the 2006 war between Lebanon and Israel, as well as the presence of UNIFIL peacekeepers along its southern border.
The prime minister Thursday called on the United Nations to assume its responsibility by condemning Israel’s attack. Salam also extended Lebanon’s condolences over the death of a Spanish peacekeeper that was killed by Israel during the cross border violence.
The U.N. peacekeeper has identified as Cpl. Francisco Javier Soria Toledo, aged 36. The peacekeeper was killed “because of this escalation of violence, and it came from the Israeli side,” Spanish Ambassador to the U.N. Roman Oyarzun Marchesi told reporters earlier Thursday.
Salam also expressed his condolences over the death of Saudi King Abdullah, who passed away last week, and wished the best of luck to his half-brother Salman who succeeded his rule.
According to Joreige, Salam reiterated his call for the election of a president, almost nine months after former President Michel Sleiman left office.
Cabinet then proceeded to discuss a 51-item agenda and approved a decree calling for raising the number of policemen in the Internal Security Forces from 29,000 to 35,000.
Before the session started, police guarding government headquarters in Downtown Beirut prevented journalists from approaching ministers who arrived for the 10 a.m. meeting.
The police were working under strict orders from Salam not to allow reporters to get remarks from ministers that could distract attention during the talks.