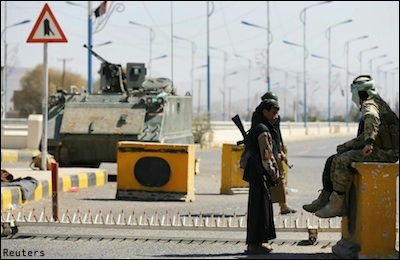 The Other Side of Autocracy: State Collapse in Yemen
Jonathan Spyer/PJ Media
January 24, 2015

This week in Yemen, an Iran-backed Shia militia captured the presidential palace. The president has since resigned. It was the latest stage in the slow advance of the Houthis, who entered the capital Sana’a in September of last year.

The latest Houthi victories do not bring the Shia rebels undisputed control of the country. They do, however, ensure the undisputed presence of the Iranian clients in the central government.

The situation in Yemen exemplifies in acute form most of the phenomena which are currently tearing much of the Middle East apart: the fragmentation and weakness of central governments; growing sectarian divisions; the presence and power of a strong, Iranian backed political-military force; the importance of local and tribal power structures; Saudi support for the Sunnis; and the existence of a powerful Sunni Jihadi organization, committed both to local struggle and to terrorism against the West.

The latest Houthi victories ensure the undisputed presence of Iranian clients in the central government of Yemen.

The uprising of the Houthis was launched in 2004. The movement derived its popular support from the 30% or so of Yemenis who belong to the Zaidi Shia community, concentrated in the north of the country.

While protesting undoubted discrimination against the Shia, the evidence of Iranian backing for the Houthi militia — officially known as “Ansarullah” (fighters of God) — was apparent from the outset. The stance of the Houthis is reflected in the group’s unambiguous slogan: “God is Great, Death to America, Death to Israel, a Curse on the Jews, Victory to Islam.”

The physical proof of Iranian aid is also apparent. On January 23, 2013, the Yemeni coast guard apprehended an Iranian ship — the Jihan 1 — which was carrying weapons, explosives, and other military equipment from the Revolutionary Guards Corps intended for delivery to the Houthis.

As of this week, the Houthis have an accepted role in the government of Yemen. After fighters of the militia surrounded the presidential palace, President Abd-Rabbu Mansour Hadi confirmed the terms of an agreement signed after the Houthis entered the capital last September.

The disputed terms relate to a new constitution, to which the Houthis are demanding amendments. This is less important, however, than the now demonstrated fact that the Shia, Iran-backed militia is the real force in the capital, able to bend the president to its will after killing a number of his guards and threatening his palace.

Al-Qaeda in the Arabian Peninsula remains the most formidable local franchise of the global al-Qaeda network.

The Houthis are not, of course, the only militia force active in Yemen. Further south, al-Qaeda in the Arabian Peninsula (AQAP) remains the most formidable local franchise of the global al-Qaeda network. It claimed responsibility for the recent terror attack on the offices of the Charlie Hebdo magazine in Paris.

Strong in southern and central Yemen, al-Qaeda has launched a campaign of violence against the Houthis. It also strikes at government and military officials. Operating under the name of Ansar al-Sharia, AQAP now effectively controls a number of provinces in the south and east of the country.

The presence of the Houthis in the capital and the Sunni jihadis in the lawless territories to its south is compounded by the weakness and corruption of the central government, which barely exists outside of Sana’a, and now only exists within it by the grace of a pro-Iranian Shia militia.

The central government barely exists outside of Sana’a, and now only exists within it by the grace of a pro-Iranian Shia militia.

There are no easy solutions in Yemen. As of now, the U.S. is continuing with pinpointed strikes against AQAP, while largely preferring to ignore the no-less-potent threat of the Houthis. This relates, presumably, to the Obama administration’s larger policy of outreach to Iran. But in practice, there is probably little the U.S. or any other outside force can do.

The issues at stake in Yemen are the product of the profound failure of the Arab state which underlies all that is taking place in the Middle East today. The U.S. experience in the 2003-11 period in Iraq shows that nation-building from the outside is not going to succeed.

Fascinatingly, it is the Arab state, not the Middle Eastern state, which is in a process of eclipse. Israel, Turkey, and Iran, in their different ways, are functioning sovereign entities. Kurdish Northern Iraq is also increasingly coming to resemble a successful semi-sovereign concern. The Kurdish enclaves in the northeast are the most peaceful and best administered parts of the former Syria.

But from the Mediterranean coast, via Lebanon, Syria, Iraq, and now down to Yemen, there is a single line of non-functioning (or in the Lebanese case, barely functioning) territories, in which the state has given way to wars between rival successor entities, usually organized on a sectarian basis. The Houthis and AQAP are the local Yemeni variant of this.

The Arab states which have not collapsed are ones which are homogenous in sectarian terms and/or possessed of a powerful, dictatorial central government. There are two states — Egypt and Jordan — where a real chance existed of jihadis gaining a foothold in the way that they have in Yemen, Syria, Iraq and Lebanon, but where this has not yet taken place. In both cases, an authoritarian central government at the head of a strong state apparatus has prevented the jihadis from establishing their mini-emirates (though in Sinai, the battle is surely still on).

Can these authoritarian regimes be a model for the future of the region, or are they simply a guarantee of its further stagnation? Perhaps the latter. But for the moment and for the foreseeable future, the choice is between leaders like Sisi, or situations like that of Yemen. Authoritarian clients, or the Houthis and al-Qaeda. No third way has yet made itself apparent.

**Jonathan Spyer is a senior research fellow at the Global Research in International Affairs (GLORIA) Center, and a fellow at the Middle East Forum. He is the author of The Transforming Fire: The Rise of the Israel-Islamist Conflict (Continuum, 2011).