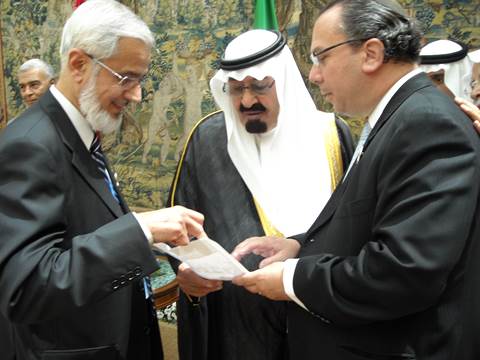 Rabbi Marc Schneier spoke with Ynet about his unique relation with Saudi King Abdullah, who he says was a trailblazer in Jewish-Muslim interfaith dialogue and committed to peace, not just between Israel and Palestinians, but in the entire region.

“I found the Saudi leadership and the tone set by the king to be very understanding and concerned with the Jewish community,” says Rabbi Marc Schneier about his now deceased friend – King Abdullah of Saudi Arabia.

“The king was progressive, he wanted to move the kingdom forward, both domestically, but also in terms of religion. Even if it was two steps forward and one back, the movement was always forward. I found him to be a very significant partner and personality in terms of advancing interfaith dialogue – in particular with the Jewish community.”

Rabbi Schneier, who is one of America’s most prominent Jewish figurers, and a trailblazer in promoting Muslim-Jewish interfaith dialogue, found a friend in the Saudi king, who he said was a supporter of Jews and inter-religious cooperation.

The king, Rabbi Schneier explains, was first and foremost a pragmatist and a moderate. His interfaith efforts were preceded by the 2002 Saudi peace initiative (known as the Arab Initiative):

“The Saudi peace plan (2002) was before the interfaith push in 2007, but he was very pragmatic and recognized Israel was here to exist and decided to focus on how Muslims can go about dealing with that. It is no coincidence that during the last war in the summer, in addition to hearing comments from Egypt and such about the risks of Hamas… you could also hear similar comments coming from the kingdom. This trickled into other Gulf States as well.”

According to the rabbi, he was a man dedicated to peace and one of the first to think about the conflict in political and not religious or ethnic terms.

“Whether it’s Iran or radical Islam, he knew this was a new challenge not only to Israel but also one for moderate Arabs states, and led the attempt to view the conflict not as Jews versus Arabs or Muslims, but of moderates versus radicals.

“The king’s desire was to see peace – he was the author of the Saudi peace plan – which was very radical at the time,” the rabbi said, recalling a lunch he held with the Saudi ambassador to the US, Adel al-Jubeir, in which the diplomat urged the rabbi to try to convince Israel to reexamine the peace initiative.

“I found the Saudi leadership and the tone set by the king to be very understanding and concerned with the Jewish community,” the rabbi said.

“He hosted about 200 religious leaders from around the world including some 30 Jewish leaders. It was dynamic exchange,” Schneier recalls.

However, things didn’t go as smoothly as could be hoped after one of the participants, a prominent cleric from Saudi Arabia, said that interfaith dialogue is possible with all faiths except Jews.

“At one of the sessions I was asked to comment about interfaith relations and a very prominent Saudi cleric said Muslims can dialogue with everyone but Jews – ‘how can we dialogue with a faith that is chosen and perceives itself as superior,’ he said – the exchange received a lot of media attention.”

“The Saudis really were very outraged by the comments of the Saudi cleric and were very supportive of the Jewish faith.”
The rabbi recalls another story from the same conference, which shows how far the king was willing to take his commitment to moderation.

“About a week before the conference, I learned that Rabbi Yisroel Weiss, from the radically anti-Zionist Neturei Karta and who used to attend former Iranian president Mahmoud Ahmadinejad’s Holocaust denial conferences, was set to attend.

“This was the Saudi’s first foray into the world of interfaith and they invited him to speak at the conference. When I learned he was attending and shared this with my Muslim colleagues at the Islamic Society of North America (ISNA), they called the Saudis and told them this was an affront to the Jews. Together with the ISNA we said we would not attend the conference if the invitation stood.

Schneier recalls how his own interfaith activities, as president of the New York-based Foundation for Ethnic Understanding, spiked the king’s interest. Schneier, who is the author of the first book to be penned by a rabbi and an imam (Sons of Abraham, Random House) and whose organization operates in over 40 countries, recalls a campaign his organization led in 2009.

The group took out an ad in the New York Times showing imams and rabbis working together. Rabbi Schneier showed the ad to the king who was inspired by the effort.

“In 2009, when the king came to the UN to deliver his interfaith speech he convened 150 religious leaders in the New York Palace hotel for a private meeting. We discussed a host of religious issues and I was honored that the king invited me to speak on behalf of all of those in attendance,” he said.

“I never felt that as a Jew I was given any different treatment,” the rabbi recalls.

On a personal note, Rabbi Schneier recalled fondly the warm wishes sent by the kingdom on the occasion of his son’s bar mitzvah three years ago.

FFEU is the international address for Muslim Jewish Relations and the national address for Black-Jewish relations. “We are committed to the belief that direct dialogue between ethnic communities is the most effective path towards reconciliation,” the foundation said in a statement.