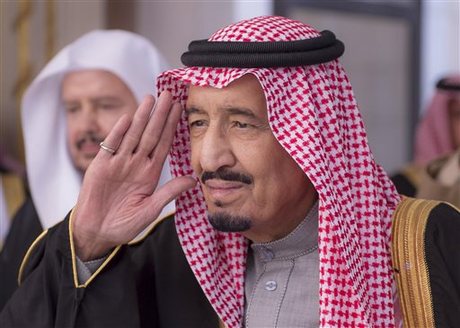 Saudi Arabia buried King Abdullah Friday as foreign leaders gathered in the capital for the funeral of the ruler of the world’s top oil exporter and the spiritual home of Islam.

Abdullah, a cautious reformer who led his kingdom through a turbulent decade in a region shaken by the Arab Spring uprisings and Islamic extremism, died early Friday aged about 90. He was replaced by his half-brother Salman, who moved quickly to consolidate his hold on power and vowed to maintain a steady course for the conservative kingdom.

Salman joined Gulf rulers and leaders including Turkish President Recep Tayyip Erdogan and Pakistani Prime Minister Nawaz Sharif for a funeral service at Riyadh’s Imam Turki bin Abdullah mosque. Abdullah’s shrouded body was borne on a simple litter by members of the royal family wearing traditional red-and-white checked shemagh head gear. The body was quickly moved to nearby al-Od public cemetery where it was buried. Citizens were invited to pledge allegiance to Salman at the royal palace.

Another of the late monarch’s half-brothers, Moqren, was named crown prince. In his first public statement as the new ruler, 79-year-old King Salman vowed to “remain, with God’s strength, attached to the straight path that this state has walked since its establishment”.He called in televised remarks for “unity and solidarity” among Muslims and vowed to work in “the defense of the causes of our nation”. Moving quickly to clear uncertainty over the transition to the next generation, Salman named the interior minister, Prince Mohammed bin Nayef, as second in line to the throne. He also appointed and one of his own sons, Prince Mohammed, as defense minister.

Officials did not disclose the cause of Abdullah’s death, but the late king had been hospitalized in December suffering from pneumonia and had been breathing with the aid of a tube. Under Abdullah, who took the throne in 2005, Saudi Arabia has been a key ally of Washington in the Arab world, most recently joining the US-led coalition carrying out air strikes against the Islamic State group in Syria and Iraq. President Barac Obama was quick to pay tribute to Abdullah as a “valued” ally.

“The closeness and strength of the partnership between our two countries is part of King Abdullah’s legacy,” Obama said in a statement shortly after the monarch’s death. Vice President Joe Biden said on Twitter he would lead a delegation to Saudi Arabia “to pay respect and offer condolences”.
Other tributes came in from foreign leaders, with French President Francois Hollande hailing Abdullah as “a statesman whose work profoundly marked the history of his country”. British Prime Minister David Cameron said he was “deeply saddened” and that Abdullah would be remembered for “his commitment to peace and for strengthening understanding between faiths.”

As the top producer in the Organization of Petroleum Exporting Countries, Saudi Arabia has been the driving force behind the cartel’s refusal to slash output to support oil prices, which have fallen by more than 50 percent since June. But prices surged Friday, amid uncertainty over whether the new king would maintain that policy. The International Energy Agency’s chief economist said he did not foresee major policy shifts.
“I do not expect any significant change in the oil policy of Saudi Arabia and I expect and hope that they will continue to be a stabilization factor in the oil markets,” Fatih Birol told AFP in Davos, Switzerland.

Saudi Arabia is home to Islam’s holiest sites, Mecca and Medina, and its role as a spiritual leader for Sunni Muslims has seen it vying for influence with Shiite-dominated Iran. Tehran nonetheless offered its condolences, saying Foreign Minister Mohammad Javad Zarif would travel to Riyadh to take part in official ceremonies on Saturday. Behind his thick, jet-black mustache and goatee, Abdullah had a shrewd grasp of regional politics.
Wary of the rising influence of Islamist movements, Saudi Arabia has been a generous supporter of Egyptian leader Abdel Fattah al-Sisi since the army’s ouster of Mohamed Morsi of the Muslim Brotherhood. Egypt declared seven days of official mourning for Abdullah. Saudi Arabia has also played a key role in supporting opposition to Iran-backed President Bashar al-Assad of Syria, allowing U.S. troops to use its territory to train rebel fighters.

Salman is widely expected to follow closely in Abdullah’s footsteps, in foreign and energy policy as well as in making moderate reforms to the deeply conservative kingdom. Abdullah pushed through cautious changes while in power, challenging conservatives with moves such as including women in the Shura Council, an advisory body. He promoted the kingdom’s economic development and oversaw its accession to the World Trade Organization, tapping into the country’s massive oil wealth to build new cities, universities and high-speed railways. But Saudi Arabia is still strongly criticized for a dismal human rights record, including the imprisonment of dissidents. It is also the only country in the world that does not allow women to drive.

“The Saudi regime seems insensitive to human rights and human dignity and unfortunately they are also protected by many Western countries because they have oil and because they are seen as allies in the fight against terrorism,” Amnesty International head Salil Shetty told AFP in Davos.
Salman is a stalwart of the royal family credited with transforming Riyadh from a backwater to a thriving capital during his half-century as governor. Since the death in 1952 of the kingdom’s founder, King Abdul Aziz bin Saud, the throne has passed systematically from one of his sons to another. Abdul Aziz had 45 recorded sons. Abdullah, Salman and Moqren were all born to different mothers. Saudi Arabia has managed to avoid the social upheaval that has shaken many of its neighbors in recent years, thanks in large part to massive public spending. But the new king will face some major challenges, especially as falling oil prices cut into state revenues.
Agence France Presse

Speaker Nabih Berri and Prime Minister Tammam Salam will fly to Saudi Arabia Saturday with a delegation of MPs and ministers to pay condolences to King Salman, Crown Prince Muqrin and Deputy Crown Prince Mohammad bin Nayef.
The Saudi Embassy in Lebanon announced that it would be receiving condolences over three days Saturday, Sunday and Monday at Mohammad al-Amin Mosque in Downtown Beirut.

Berri offered his condolences through cables to Saudi King Salman, Crown Prince Muqrin and Deputy Crown Prince Mohammad Bin Nayef.
For his part, Salam said that Lebanon had lost the wisest of Arabs and a great friend of Lebanon.
“It is with great sorrow and grief that we announce to the Lebanese the [death] of the wisest of Arabs and Lebanon’s greatest friend, the Custodian of the Two Holy Mosques, his Majesty King Abdullah bin Abdul Aziz, after a long life of service to his country and [Arab] nation,” Salam said.
He said with the death of King Abdullah: “Lebanon lost [a figure of] support and backing who always stood by his side in times of crisis, and never hesitated to extend a helping hand.”

Salam praised him for what he said were his numerous initiatives that were aimed at boosting Lebanon’s national unity, peace and security.
Lebanon and other Arab and Muslim countries “lost a unique, courageous leader who had always upheld their causes and concerns.”
Former Prime Minister Saad Hariri called on fellow Lebanese to mourn King Abdullah “who has continually offered support for Lebanon.”
“The Arab and Islamic nation lost a brilliant leader and an exceptional figure, who marked the history of the Kingdom of Saudi Arabia and the region with great achievements and initiatives that will remain a benchmark for political interaction, economic progress and social growth for the kingdom and its Arab surrounding,” Hariri said in a statement.

Hariri called on the Lebanese people, “who always had a special place in the heart of King Abdullah bin Abdul-Aziz, that rose to the level of a father-son relationship,” to declare a day of mourning in all areas “as an expression of popular loyalty to a man who always supported Lebanon and stood by it in the most difficult times.”

In an interview with Al-Arabiya later in the day, Hariri recalled a phone call he received from Abdullah after jihadi gunmen overran Lebanon’s northeastern border of Arsal last summer.

“He offered a lot to the Lebanese Army, and he believed that he should support the fight against terrorism in Lebanon. He therefore gave Lebanon a $1 billion grant to fight this kind of terrorism and extremists,” he said.

“He called me that day, late at night, and insisted on the announcement of this grant, because he saw the gravity of extremism.”
In a separate interview with Future News TV, Hariri said that ties between Lebanon and Saudi Arabia would not change under King Salman, who he said was a great admirer of Lebanon.Hariri took part in King Abdullah’s funeral in Riyadh.
MP Walid Jumblatt tweeted: “The great Arab knight departed…”

In a second tweet Jumblatt praised King Abdullah, describing him as the biggest friend of his slain father Kamal Jumblatt, assassinated in 1977.
Kataeb Party leader Amine Gemayel offered his condolences as well to King Salman. “We were bereaved with the passing away of King Abdullah bin Abdul Aziz, who was a friend of Lebanon and a brother of all the Lebanese under all circumstances,” Gemayel said in a cable.
“When I was a president and even after that, I personally felt how much he cares about Lebanon,” he added.