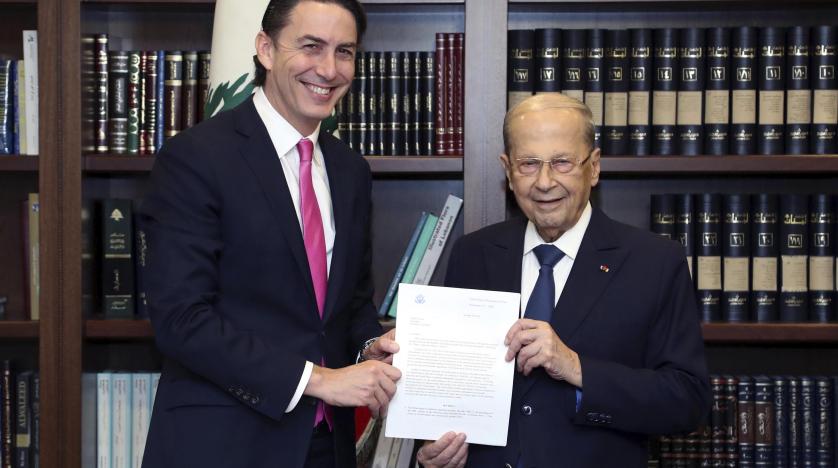 On October 26, Amos Hochstein headed back to Lebanon for the “signing ceremony” for the maritime boundary deal Team Biden succeeded in imposing on Israel. Reflecting the farcical nature of what was bizarrely advertised in some quarters as a “normalization” deal between Israel and an Iranian vassal, the “ceremony” consisted of the two sides separately signing and depositing the agreement with the US representative.

Although the Lapid government had hyped a “joint” signing ceremony as something “very important,” the ridiculousness of the non-spectacle is fitting. The “government of Lebanon” and its “sovereign leadership” that supposedly concluded the agreement with Israel have the same relation to reality as the high council of elves and wizards from Lord of the Rings does to political power in Northumbria. Instead, they’re fictional characters that can serve certain very limited public functions while dressed up in appropriate costumes. For instance, it behooved the Israeli lame duck government to say that it had signed a deal with “the government of Lebanon,” and that this process actually “weakened” Hezbollah.

In reality, the Lapid government was as much a prop as its Lebanese counterpart on a stage on which the two principal actors were in fact the United States and Iran, as represented by Hezbollah. It’s been clear for months that Washington has been negotiating with the terror group through trusted Hezbollah cutouts like Abbas Ibrahim, head of the Directorate of General Security. The Biden administration’s framing of the deal therefore emphatically identifies it as an extension of its broader Iran policy, whose effect is to strengthen Hezbollah through its Iranian patron.

On the day the agreement was announced, two senior administration officials briefed reporters on it on a background call. Before discussing the deal itself, a White House official began by explaining how it is to be understood by situating it within the administration’s vision for the region: “a more stable, prosperous, integrated region.”

“Regional integration” is the administration’s key technical term of the moment. It describes an aspect of former president Barack Obama’s Realignment doctrine, which posits that US allies need to stabilize and prop up— “integrate”—Iran and its so-called regional equities, and cease any measures that might weaken the Iranian order.

Hence, when the White House official proceeded to provide examples of the “integrated” region the administration envisions, all three involved Iranian holdings: Iraq, Yemen, and finally, Lebanon, where the maritime deal was said to “manifest” the hoped-for integration. The US role is to maneuver America’s allies so as to ensure that these existing Iranian spheres become more stable, prosperous, and integrated—under the thumb of Iran, of course.

How does the Lebanon gas deal advance the administration’s regional vision? The administration has emphasized a set of key talking points for the agreement, and more importantly, for how it defines the regional posture of the United States. With this agreement, the administration is communicating to the Iranians that it will situate the United States in-between Israel and the Hezbollah-run Iranian equity, in order to fairly and equally safeguard the supposed interests of the ally and the Iranian terrorist pseudo-state.

“This agreement is not a win-lose agreement. The parties are not getting more than the other, because they get different things,” one of the senior officials (let’s just call him Amos Hochstein) said on the call. This bit of paternalist wordplay can’t help but raise a smile from even the most jaded consumers of diplomacy-speak. Forcing Israel to concede to 100 percent of Hezbollah’s demands shouldn’t be viewed as a “win” for the latter—far from it. In return, Israel was getting a “different thing.” What that thing is, the administration has made a point of advertising, is “security.” The Iranian satrapy, meanwhile, gets “economic prosperity.”

Of course, this is a fake distinction, as even the administration’s sales pitch makes clear. The administration advertised its “integration” agreement as providing both prosperity as well as security to the Hezbollah pseudo-state. “This agreement, we are confident, will provide the kind of security that both countries need,” the same senior official said in the background briefing. In fact, the administration linked Israel’s security to that of its enemy to the north and to its prosperity. “Having a prosperous Israel side-by-side a prosperous Lebanon is the best security guarantee for both countries,” explained the senior official.

A corollary talking point described a supposed “balance of deterrence” established by the deal that would operate through the ludicrous proposition of “a rig for a rig,” whereby the offshore platforms of both countries would be held hostage by the other side. According to this formula, Israel, if attacked by Hezbollah, could always blow up a platform owned and operated by the French oil company Total—thereby violating its own contractual agreements with the French company and bringing France into the conflict on Hezbollah’s side. How this would deter rather than encourage Hezbollah to interfere with Israel’s oil rigs is unclear.

Although the Obama D.C. echo chamber hailed this equation as a testament to the administration’s commitment to Israel’s security, mutual deterrence between Israel and Hezbollah is a net loss for Jerusalem. It means either that Israel is deterred, or that the United States seeks to impose a framework that constrains Israel from targeting Hezbollah in Lebanon. Or both. The administration’s euphemistic language covers an ugly underlying arrangement that the administration desires to govern relations with Lebanon.

The drivers of a potential conflict between Israel and Hezbollah are multiple, growing, and entirely unrelated to the maritime issue, which has played no discernable prior role in the strategic calculations of either side, or even in propaganda efforts. Hezbollah’s arms build-up, acquisition of more advanced weapons systems, and development of precision-guided munitions, continue apace, all against the backdrop of Team Biden’s dogged pursuit of reviving Obama’s deal with Iran—country-wide riots in Iran notwithstanding.

Hezbollah, having won this round with the threat of force, will have no problem raking in its chips while continuing its build-up. The administration’s “incentives” can only facilitate that growth. The notion that foreign investment deters Hezbollah is a fallacy. If it constrains anyone, it’s Israel. The more invested the United States and France are in Lebanon, the more complicated Israel’s freedom of action becomes, as Washington and Paris will lean on Jerusalem to dissuade it from taking any action against Hezbollah in Lebanon, even if it were dictated by national security imperatives.

What the administration is communicating, with the foreign investments and increased entanglements, as well as with the insertion of the United States as a guarantor between Israel and Hezbollah, is that moving forward, it is putting multiple checks in place on Israeli action in Lebanon. In other words, Lebanon is to be “integrated” into the region as Hezbollah’s base.

The Obama administration had started this policy during the Syrian war. It was best exemplified by the ongoing policy of underwriting the Lebanese Armed Forces (LAF) under the pretext of maintaining Lebanon’s stability. That is, the Obama administration subsidized and armed the LAF to perform the function of protecting Hezbollah’s rear as the latter prosecuted its war in Syria out of Lebanon. With the maritime deal, the administration has signaled to the Iranians not only that the United States recognizes their regional “equities,” but also that it intends to force American allies into doing the same.

*Tony Badran is Tablet magazine’s Levant analyst and a research fellow at the Foundation for Defense of Democracies. He tweets @AcrossTheBay. FDD is a Washington, D.C.-based, nonpartisan research institute focusing on national security and foreign policy.