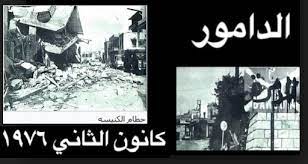 Sabra-Shatila vs. Damour: The Moral of the Story
Joseph Hitti/September 18/2022

Even today on blogs and platforms, young people who live thousands of miles away from Lebanon and were born after that war, will display the brainwashing about the poor Palestinians and the bad Israelis who allowed the barbaric Lebanese Christian militias to enter the camps and carry out the massacre in September of 1982.

The offensive and insulting aspect of all this, is that the Lebanese in these events are reduced to mere abstract agents of horrible behavior vis-à-vis the real actors – those who are worthy of our feelings of hatred and sympathy – the Israelis of course and the Palestinians of course as well. But the Lebanese, those who actually did the killing, are generally ignored. They are reduced, even as they were the killers, to a burden on the Israeli conscience which is presented to the world as the real moral dilemma in this one massacre of many that took place on Lebanese soil.

The Lebanese are deprived by the media of any human aspect that may explain their horrible conduct. The subtext is that the Lebanese Christian militiamen are incapable of moral conflict, they are (in the subconscious of westerners) incapable of questioning and doubting the moral value of their actions, and so we, westerners, don’t even bother. We take it at face value that the Lebanese Christian militiamen cannot be driven by any human motive; they simply are subhuman, and we do not ask the moral question when it comes to them. Just as we would not ask of a tiger who mauls someone at a zoo or a dog that suddenly attacks a baby, and so on.

On the other hand, we present the Palestinian refugees as the ultimate victims of this horrible crime, and here again – because the Palestinians, like the Christian militiamen, are Arabs – we don’t even attribute to them any agency as to their fate. They are unwilling victims, and they have no say in their fate as victims, no responsibility, no moral issues behind their status of victims. But it is often left unsaid that the Palestinian refugees were made refugees, not by the Lebanese Christians, but by the European Jewish conquest of Palestine between 1920 and 1947 that evicted hundreds of thousands of Palestinian villagers and townspeople from their homes, demolished their ancestral stone houses and their olive groves, and created the state of Israel over the ashes of Palestine.

And so, the only “serious” moral issue in this entire western construct is: How could Israelis – usually implying morally superior Jews – allow that to happen and watch as the massacre unfolded? Here, the subtext is: Only Jewish Israelis – for a multitude of reasons having to do with western history and guilt, and the macabre relationship between the West and the Jewish people over centuries – are capable of moral judgment, and so they ought to be responsible for allowing the massacres to occur. The Arabs on the other hand are incapable of morality – at least not on the sublime level of morality held by the Jewish people – so neither the killer Lebanese, nor the victim Palestinians, are of interest. They are the guinea pigs in this ethical experiment which only the Jewish Israelis are capable of struggling through and comprehending. In a laboratory, you don’t ask the guinea pig for its reflections on being the sacrificial animal, nor do you ask the lab technician for the grand consequences of the experiment. Only the scientist who supervises the whole enterprise is capable of such deep human reflection.

I started writing this with the goal of explaining why the Lebanese people reject the permanent settlement of the Palestinian refugees in their country, or to tell those who forget that the Palestinians caused tremendous pain and harm to their host country of Lebanon over more than two decades. In fact, not one of all those who discuss the Sabra-Shatila massacres of 1982 will ever mention the Damour Massacre that took place in January 1976, in the dead cold of winter, six years before the Sabra-Shatila massacre which was in fact an act of revenge for the Damour Massacre. Revenge seems to be acceptable in today’s political arena: Israelis will demolish the home of a Palestinian protester in revenge for his throwing rocks on Israeli soldiers; the US invaded Afghanistan in revenge for the 9-11 attacks. So why are the Lebanese Christians denied the right to avenge the Damour massacre?

Israel in 1976 was not involved in the Damour Massacre, so there was no coverage. Israel’s “conscience” was not involved, so there was no moral dilemma. Arab killing Arab is expected and is of no interest because Arabs, again, are incapable of moral thinking. But as soon as Jewish Israelis are involved, even as mere observers – not as killers or victims – and entire encyclopedias and dissertations are written in the most prestigious of academies, movies are made, and pundits discuss it at length in the leading newspapers of the world for decades after the event. Inquiry commissions are formed and judgments are issued. How graceful of the Judeo-Christian West to beat its chest over what lesser humans have committed!

But Damour…remained a ghost town between 1976 and 1990, its old stone houses razed to the ground, its cemeteries desecrated, its citrus and banana groves devastated. By the mid 1990s when the people of Damour began returning, the landscape had changed so much that the town is today unrecognizable. It looks like one of those brand new soulless Jewish settlements built atop a West Bank hill stolen from the same Palestinian refugees who live in the camps of Lebanon, Syria, Jordan, and yes, Israel itself.

How come is the Israeli so-called moral conscience not called upon to take the Palestinian refugees back to the land it stole from them? Not to Haifa or Jaffa or the villages of Galilee from which they were ethnically cleansed; just to the West Bank where they could be only miles away from the Palestine the European Israelis chased them from.

How come the demographic argument – God forbid the Jewish identity of Israel be disturbed – is so much more important than the morally abhorrent crime of taking one people’s land, evicting them from it, and callously asking other countries to give them substitute land? Somehow, the Jewish people can’t understand that other people hold their native land just as sacred as the promised land “granted” to the Hebrews by the Big Zombie in the sky some 3,000 years ago.

Lebanon will never forget what was done to Damour, nor will the Lebanese people ever accept any moral responsibility for the Palestinian refugees, responsibility that belongs nowhere else but with Israel. The international community can count on it. The Crusaders came 1,000 years ago to recover a religious real estate they thought was theirs, stayed about 300 years, built colonies, evicted local inhabitants from their villages, and waged endless wars. But in the end, they were defeated and evicted. If the Jewish people ruled Palestine for 300 years some 2,500 years ago, and on this basis claim ownership of the place, isn’t it more compelling for the European Christians to claim Palestine if they too ruled it for 300 years, but only 1,000 years ago?

Picture Enclosed: Town sign of Damour after the 1976 massacre carried out by the Syrian Army and its Palestinian allies. A large white X covers the sign and the Arabic word for Fatah (top center) testifies to the authors of the crime, Yasser Arafat’s Palestinian organization. In large black letters appearing to drip with blood is the word “moudammara” meaning “destroyed”. Dammara is the Arabic verb “to destroy”, which sounds close enough to “Damour” for the Palestinian thugs to wax poetic even as they murdered a thousand residents of the Christian town in January 1976.