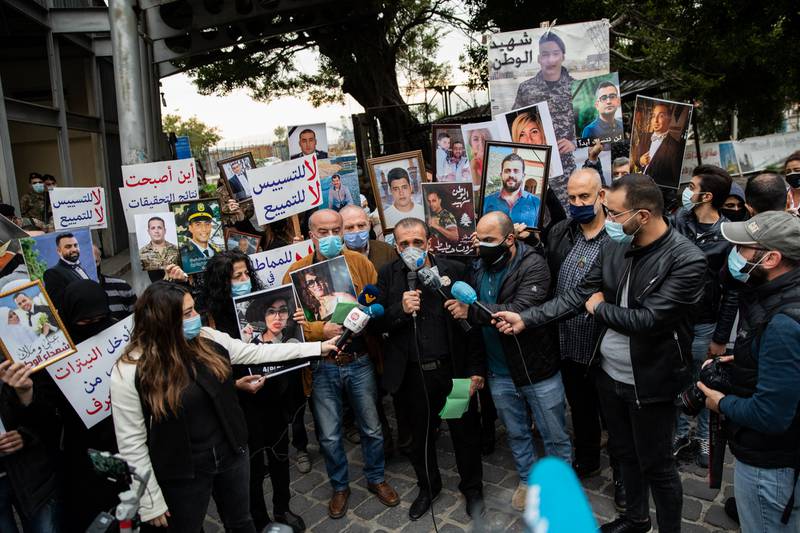 Beirut blast: lack of justice compounds grief for families of victims
Two years after the fatal port explosion, a judicial investigation has stalled and accountability remains a distant prospect

Jamie Prentis/The National/Aug 03, 2022
Two years after the fatal port explosion, a judicial investigation has stalled and accountability remains a distant prospect
Almost two years ago, Mireille Khoury was at her home in Beirut with her children Elias and Nour when an explosion at the city’s port ripped through the Lebanese capital.
The walls of the house collapsed, leaving Ms Khoury and Nour with long-lasting injuries. Elias, who was 15 and an aspiring musician, fell into a coma before succumbing to his injuries two weeks later.
Since that day, Ms Khoury has had to endure living with the grief of losing her son ― but with no answers as to why or how a huge stock of ammonium nitrate was left in storage at the port for years. The stock eventually caught fire and caused the explosion.
More than 215 people died in the August 4 blast, which is regarded as a damning symptom of decades of corruption and mismanagement by Lebanon’s ruling elite.
“My daughter has injuries and scars that she will carry all her life. This is not to mention the trauma, and not to mention the loss of her brother,” Ms Khoury told The National, days before the second anniversary of the explosion.
Two years on, there has been no justice for the victims.
An investigation led by judge Tarek Bitar stalled and has been on hold for eight months. Among those charged in connection with the investigation are two sitting MPs, but they have refused to attend interrogation hearings. Hassan Diab, who was prime minister at the time of the explosion, has also been charged with negligence.
Mr Bitar, who also charged several top security officials in the matter and is the second judge to take on the case, has repeatedly been impeded by legal challenges from former Cabinet ministers.
The complete absence of accountability has only exacerbated the trauma felt.
“In addition to the grief, the loss and all that we went through … I mean, I don’t know how I am still able to talk to you in this way,” Ms Khoury said.
“There is also the issue of this injustice. It triggers inside you a very strong feeling of bitterness, and a feeling of injustice and feeling of frustration, but on a different scale. It’s like a scale that you’ve never encountered in your life.
“You sometimes feel injustice in life, you sometimes feel bitter. But this is a scale [that] you can never imagine, because the tragedy is out of this world.”
Lebanon is in the middle of an economic collapse that first became apparent in 2019, and has been described by the World Bank as one of the worst in modern history.
The explosion, the economic downturn, Covid-19 and the fall-out from Russia’s invasion of Ukraine have individually and collectively ensured miserable living conditions for much of Lebanon’s population.
A large proportion of the population has been plunged into poverty, the local currency has lost more than 90 per cent of its value, and there are widespread shortages in basic supplies such as medicine, water, bread and electricity. Mariana Fodoulian, who lost her 29-year-old sister Gaia in the blast, said it was “cruel” to see MPs in parliament voting on laws when they had been charged in connection with the investigation.
“For me, the government is killing us every day, the government is stopping justice every day. They are fighting against their population,” she said.
“I don’t know how governments can kill the population and then also stop the investigation into it.”
Ms Khoury bemoaned the fact the authorities “were supposed to care about us and to care about the safety of the country”.
Beirut’s port, where the ammonium nitrate was held, is close to the city and residential areas. “They didn’t care to inform anyone, they didn’t care to take any precautions. They didn’t even warn us. I wouldn’t have lived there,” Ms Khoury said.
“They kept it for seven years, half the years of the life of my son. They are denying [us] justice.” She said that there was a 20 minute period after the fire started on August 4 ― but before the explosion occurred ― when the authorities could have evacuated nearby properties.
“No one cared to warn the people. This is a double crime. If they had evacuated the area, many people would still be alive.”
Some MPs have suggested the Supreme Council, a 15-member body comprised of eight judges and seven MPs , should be the sole body prosecuting politicians charged in connection with the blast. The council has a mandate to prosecute politicians — but no MP has yet been tried by the council, despite it having existed for decades.
Critics believe it is an attempt by those accused of responsibility for the blast to evade justice.
Speaking ahead of the anniversary, a number of NGOs collectively called for the creation of a UN Human Rights Council-mandated international fact-finding mission, with it “now, more than ever, clear that the domestic investigation cannot deliver justice”.
“As the Lebanese authorities continue to brazenly obstruct and delay the domestic investigation into the port explosion, an international investigation is the only way forward to ensure that justice is delivered,” said Diana Semaan, acting deputy director at Amnesty International. “The Lebanese authorities tragically failed to protect the lives of its people killed in the port explosion and since then they have stood against victims in their fight for justice.”
Even if those responsible are held accountable and justice is found, it will never replace what was lost.
“There will never be justice equivalent to what was lost, no way,” Ms Khoury said.
“But at least there should be some sort of accountability. Such a horrendous thing … it cannot just pass unnoticed.”.”

Parts of Beirut’s grain silos collapsed only days before the second anniversary of a catastrophic explosion at the Lebanese port. AFP