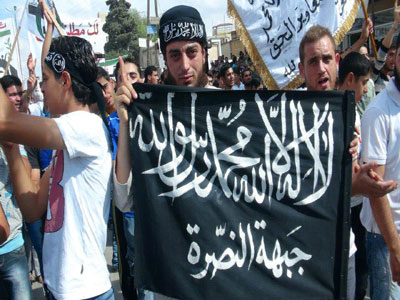 Bad times have visited the Arabs before, but 2014 was a year from hell. The region stretching from Beirut to Basra continued to slowly disintegrate, with people clinging more than ever to their primordial identities as if the colonial constructs of the Nation-States that emerged after the First World War were only a passing moment.

Most Arabs in that part of the ephemeral Arab World are now seeing themselves and are being seen as Sunnis and Shiites, while others are stressing their Christian, Druze, Kurdish, and Turkoman identities, along with members of a plethora of smaller ethnic and religious groups that constituted what was once a promising and breathtaking spectrum of diverse human mosaic. In 2014, the Middle East became less Arab and more Iranian and Kurdish, with Turkey trying to jockey for influence in Iraq and Syria. Watching Iran’s emergence as the country with great influence in Baghdad, Damascus, Beirut and Sanaa, and listening to Iranian officials saying that Iran has once again, since the reign of the Persian emperor Xerxes, (486-465 BC), become a Mediterranean power, one is tempted to say that this could be the beginning of Iran’s moment as the hegemon of the region.

Things fall apart
The fragmentation of the region, the unimaginable horrors of Syria and Iraq, the slow descent of Lebanon, Yemen and Libya into greater chaos, add to that Egypt’s continuing slouch towards greater autocracy, and you have the making of a dispirited region. It is impossible now to see how Syria, Iraq and maybe Libya and Yemen can be reconstituted as unitary states.

December was the fourth anniversary of the spark that exploded the season of Arab uprisings. An honest audit would have to show that the harvest of that season, with the exception of Tunisia, would show a worse than meager results.

“This could be the beginning of Iran’s moment as the hegemon of the region. ”
Yemen is more fragmented than ever before with the Houthi rebellion, strengthened by material and political support from Iran, being the most powerful political and military force in the country and capable of occupying the capital at will. When one adds the continuing threat of al-Qaeda, the secessionist sentiments in the South, the economic degradation of the country, and a depleted water table, one can see that Yemen is truly facing a perfect storm. Bahrain is still teetering from the painful days of 2011. Libya has been reduced to warring factions and fiefdoms vying for control of the country’s oil wealth, harbors and airports. The disintegration there is political and geographic, and the fault lines are religious and tribal. Libya’s travails in 2014 show that the deep scars the more than four decades of Qaddafi’s tyranny have caused, will not be healed any time soon if ever.

A Mesopotamian nightmare
Like an ill wind blowing from a scorched desert, a “Caliph” came into being and his nightmarish realm called the Islamic State, sitting astride the ancient lands of Syria and Iraq, and he brought with him the wrath of the devil’s rejects.

Last June, the self-anointed “Caliph Ibrahim, the Emir of the faithful” urged the Muslims of the world in flawless classical Arabic to join Jihad under his guidance to restore to the Muslim Ummah the “dignity, might, rights and leadership” that it once had enjoyed.

But what were restored were the times of the sectarian assassins, ritualistic beheadings, religious and ethnic cleansing. The scenes of long lines of Christian and Yazidi refugees fleeing their ancestral homes in Mosul and other towns in Northern Iraq and walking aimlessly in search of refuge under the merciless June sun looked as if they belonged to another bygone century. Mosul, Iraq’s second largest city and a historically important urban center of diverse communities was “cleansed” of its Christian inhabitants who lived there continuously for 1700 years. Iraq’s Christian population before 2003 was 1.5 million strong. Since the American invasion, two third of them were pressured to leave because of the deteriorating political and security conditions, or because they were terrorized and forced by radical Islamists to leave.

Strange alliance
In 2014, Iraq became a theatre for absurd conflicts and legitimate struggles, an arena for regional and international powers to compete and collaborate simultaneously in a disintegrating land that is still grappling with its identity and searching for its elusive cultural and political orientation.

A strange alliance came into being to combat the Islamic Caliphate led by the United States and its Western and Arab allies including Saudi Arabia, the United Arab Emirates, Jordan and Qatar along with Iran. At times American and Iranian pilots reportedly divided Iraq’s airspace among them during their sorties against the forces of the Caliphate. It appears that the U.S. has accepted Iran as a de facto ally in the war against ISIS as well as accepting its sponsorship of the two regimes in Iraq and Syria.

American officials have made it clear that they are not fighting the Assad regime in Syria because they don’t want to incur Iran’s wrath in Iraq. President Assad has gotten the message, hence his brutal escalation of his bombing campaign against the rebels in the vicinity of Aleppo, where he has been raining barrel bombs incessantly against military and civilian targets.

Assad’s depravity
Human depravity reached new lows in Syria when the world saw thousands of harrowing photographs of Syrians maimed and killed by Bashar al-Assad’s torturers in his many dungeons. The emaciated, disintegrated and scarred bodies, with eyes gouged out were photographed and catalogued as only the bureaucracy of a totalitarian regime would do. The contorted corpses looked like the gruesome and deformed bodies in Hieronymus Bosch’s most horrific and surreal paintings.

Last summer, the congress of the United States took a break from its mundane partisan squabbles to listen to the testimony of the photographer who documented the last expressions on the countless faces of those who lived and died in Assad’s underworld and their last mangled positions, before they were dispatched into unmarked mass graves.

The men, mostly young were slowly tortured, starved, beaten, stabbed, burned, shot and strangled. Some men were starved to the point where their ribs poked through the skin. A hush fell over the room where the House Foreign Affairs Committee met when “Caesar”, the photographer’s pseudonym began to tell his tale of horrors. His litany of brutalities and torments visited on the corpses that were shown in large prints after they were consumed by torture would have been too outlandish to believe had it not been for the photos he had taken in hospitals and other locations. A civil rights prosecutor said that the images document “an industrial killing machine not seen since the Holocaust.” It was only befitting to display some of the photos at the U.S. Holocaust Museum in Washington. In a more just world the photos would be used as evidence in a potential prosecution of Assad for war crimes; but that presumes a more just world.

A Northern star and a fading star
Once again Tunisia has proven that it is still the Arabs’ sole Northern Star. By successfully completing its formal transition to democracy after holding transparent parliamentary and presidential elections, Tunisia has shown – so far at least- that its two main competing political forces, the secular Nida Tounes and the Islamist Ennahda can operate within the same political universe without negating one another. Nida Tounes’ electoral victories are not wide enough to form a government without Ennahda. This will force both parties to cohabitate and learn the difficult art of forming and practicing coalition governance. This may well be the outcome a still fragile polity needs at this sensitive stage. Tunisia’s serious economic challenges require a broad coalition to address. Tunisia’s secular traditions, its educated population and its empowered women and small and none politicized armed forces, and the ability of its Islamists to learn from the failures of other Islamists movements in the region, particularly the Muslim Brotherhood in Egypt came together to save the country from civil strife or the return of autocracy.

But if Tunisia is the Northern Star that kept the early promise of reform and change of its peaceful uprising, and continues to progress albeit with fits and starts, Egypt is the fading star that has regressed in the last four years and has returned solidly to the autocracy that the January 2011 uprising was supposed to dispatch into oblivion. Recently the Egyptian high court in Cairo dropped charges against ousted president Hosni Mubarak accusing him of ordering the killings of civilian protestors during the early phase of the peaceful uprising. And once again, a military strongman is in charge of the land of Egypt, albeit in civilian clothes.

The Egyptian military, which is having difficulties controlling a homegrown armed and brutal rebellion in the Sinai Peninsula, is fostering a new and toxic Egyptian hyper nationalism, an extreme reaction to the Islamists’ attempts at fostering a broad Islamist identity at the expense of Egypt’s unique character. This hyper nationalism is already hurting Egypt’s relations with the United States, but more importantly it is helping the new government in Cairo maintain the fiction that Egypt circa 2014 is still a regional power to be reckoned with. Rarely, in the modern history of the Middle East has a once very important country lived in such denial of its shortcomings and predicament as Egypt does today. Egypt cannot regain its old status as a regional power and a cultural center, unless and until its political and cultural classes engage and some badly needed introspection.