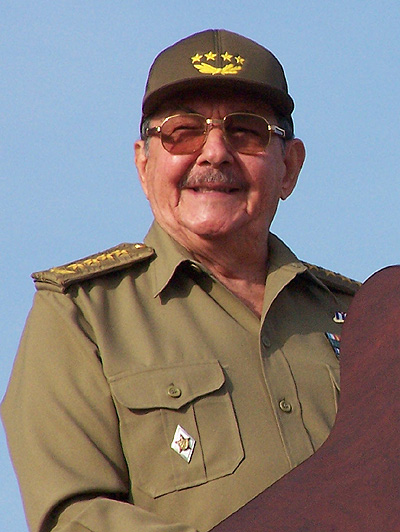 The cold war is finally over. Its last vestiges in the Western Hemisphere are collapsing now that President Obama has declared his intention to establish diplomatic relations with Cuba, lift most restrictions imposed over the last 54 years on travel, commerce and financial activities, and begin the process of removing Cuba from a list of state sponsors of terrorism.

President Obama has recognized what some of his predecessors recognized too but were unwilling or unable to change: America’s remarkably consistent policy toward Cuba since President Dwight D. Eisenhower has never achieved its stated and implied goals; i.e., regime change ad democratization in Havana. For a cautious president fresh from a bruising midterm election defeat, this was a bold move. Relying on secret contacts for 18 months, Obama has gone where no other president has dared to go for more than five decades.

There is no guarantee that the opening to Cuba will begin the transition process to a more open and eventually democratic Cuba, and conceivably a Republican president in 2016 could unravel Obama’s new political scaffolding, but clearly the time has come to try the only other alternative that could hasten the transition: soft power.

Foreign policy as domestic policy
For many years, even after the collapse of the Soviet Union, when Cuba’s vulnerabilities became more exposed, it was practically impossible for the American body politic to have a serious discussion about future relations with Cuba or the possibility of revisiting the efficacy of the embargo.

America’s relations with Cuba, like its relations with Israel, became an integral part of domestic politics. Given the electoral weight of the Cuban-American community, particularly in Florida; a pivotal state in presidential elections, presidential candidates and sitting presidents understood that U.S. policy toward Cuba is in part a function of domestic politics. The same was and is still true in the admittedly more complex relations between the U.S. and Israel.

Hisham Melhem
Second only to the American Jewish community in terms of influencing U.S. foreign relations, the Cuban-American community succeeded for a long time in maintaining the absurdities that characterized Washington’s approach to Cuba, particularly the discredited embargo. The political influence of these two communities, their electoral weight, their lobbying influence in congress, and in the case of American Jewry, their grassroot organizations, their financial contributions to sympathetic candidates and their domestic alliances, all legal and open practices, gave them political influence that was not commensurate with their demographic size. Nowhere are the boundaries of foreign and domestic politics more blurred than is the case with the U.S. dealing with Cuba and Israel.

Tortured relations
For the last fifty years, no two countries in the world were so close geographically, and with an intimate but painful history and yet so far politically than Cuba and the United States. President Obama called this tense intimacy “a unique relationship, at once family and foe”.

Before the revolution, Cuba was like an American protectorate, some would even call it a colony. It was America’s playground, a floating casino and brothel. The revolution not only radically changed the relationship between the former subject and his angry overlord, but at one time, during the Cuban missile crisis of October 1962, the communist regime of Fidel Castro led to the most dangerous confrontation in the history of the cold war between the U.S. and the former Soviet Union.

The potential horrors of this confrontation were deeply etched in the collective memories of a whole generation of Americans and Russians and were instrumental in shaping international relations until the collapse of the Soviet empire.

For more than half a century, the U.S. sought through punitive policies of economic embargoes and political isolation of the small island barely 90 miles from Florida, and through a farcical invasion and assassination attempt to topple the Castro regime but to no avail. Many years later, it was the U.S. that was isolated in the confrontation with an old, tired, autocratic and poor neighbor.

This is what President Obama acknowledged when he said that no other nation, “joins us in imposing these sanctions, and it has had little effect beyond providing the Cuban government with a rationale for restrictions on its people.”

The failure of the U.S. embargo against Cuba proves clearly that unilateral embargoes have little effect,t even when they are imposed by a superpower against a small country. Only an embargo imposed by an international coalition of powerful nations can be effective in influencing the behavior of the targeted state, be it the old South Africa, Iran or even Russia.

Soft power
This concept was developed in 1990 by Joseph Nye, a scholar and former policymaker, who argued that the end of the cold war and the emergence of globalization, and the beginning of the “Information Age” require a new approach to foreign policy that de-emphasize the use of military power and relies more on economic integration, growth, education, and values.

The assumption here is that since the U.S. is inherently the depository of these attractive values, it can use them to influence the behavior of other states and societies through the sheer force of this unique “soft power”.

While many critics argued correctly that there are severe limits to the supposed co-optation of “soft power” in a world that is still dominated by hard power (this is the essence of the neoconservative critique of “soft power, that ultimately led to the reckless invasion of Iraq) and leaders who are willing to use traditional hard power to defend their national interests, Ney’s concept still has its merits. In fact, even before Ney coined the concept of “soft power”, the U.S. used soft power tools effectively against communism during the cold war, by using public diplomacy, international organizations, cultural and academic exchanges and broadcasting factual news to the closed communist societies and introducing them to the incredibly attractive American popular culture (for decades, East Europeans grew up listening to American Jazz and blues, played by Radio Free Europe and Radio Liberty) . The Clinton administration which tried to apply “soft power” as a tool in its foreign policy, soon realized its dismal limits when confronted with the “Balkan Ghosts”. There is no room for “soft power” in the world that Slobodan Milosovitch inhabited. Military force had to be used in Bosnia and Kosovo to stop the worst mass killings on European soil since the Second World War.

The Obama administration is hoping that exposing Cuba to America’s “soft power” could achieve what all the other tools of hard power failed to achieve, that is putting the country on the path of transition to a more open society and eventually democratization. The combination of open trade and travel, public diplomacy, student exchanges, sport competitions, cultural exchanges, American investment in the nascent Cuban private sector, and opening Cuban society to the new media and finally by allowing the more than two million Cubans in America access to Cuba, could lead to a tectonic political change in Cuba. It is true that trade and diplomatic relations with China and Vietnam did not lead to political openings in those societies, but Cuba is different. Geography, culture and history could conspire against the Castro regime and slowly undermine it.

Iran is not Cuba
Can Obama make an equally bold move toward Iran and lift the sanctions by executive power as some are advocating? Iran’s challenge to the U.S. and its allies in the Middle East is infinitely more formidable and complex than the hapless Castro regime can ever be. Dealing with the Iranian regime requires smart power, which is the combination of soft power and the potential use of hard power. The confrontation between Iran and the U.S. is not limited to the bilateral domain, for it includes other international interested parties and goes beyond the nuclear issue. Also, the reason the sanctions against Iran have forced the regime to go back to the negotiations table, is that they are multilateral and not unilateral as was the case against Cuba. Iran’s destructive role in Iraq, Syria, Lebanon and Yemen represents a unique challenge that requires sustained smart power.

The Obama administration may be tempted to be more conciliatory towards Iran in the naïve hope that this could be reciprocated in the nuclear negotiations as well as in the regional flashpoints where Iran is the principal outside player. But instead of confronting Iran regionally, the Obama administration is developing an implicit partnership with it in Iraq in the name of confronting a common enemy: ISIS. Senior officials in the administration acknowledge in background briefings that one reason they don’t want to attack the military assets of the Assad regime in Syria is the fear that Iran will retaliate against American personnel in Iraq.

Yes, President Obama’s move towards Cuba is bold and should be given a chance to succeed. However, his moves in the Middle East in general and in confronting an increasingly assertive and belligerent Iran in particular are anything but bold. In the world in which the leaders of Iran, Russia and North Korea live, soft power, engagement and an extended hand can be seen as forms of appeasement.