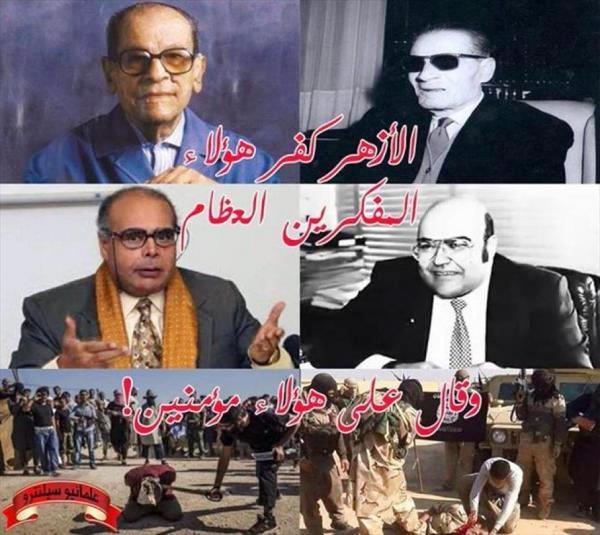 Muslim Reformers’: Forever Talking the Talk, Never Walking the Walk
By Raymond Ibrahim
December 16, 2014 in From The Arab World, Islam

Due to its rarity, it’s always notable whenever a top Islamic leader publicly acknowledges the threat of Islamic radicalism and terror.   And yet, such denunciations never seem to go beyond words—and sometimes not even that.

Thus, in “An Arab Prince Denounces Islamism,” Daniel Pipes highlights “a remarkable but thus-far unnoticed address on Dec. 5” by Salman bin Hamad Al-Khalifa, the crown prince of Bahrain.  In his address, the prince “candidly analyzed the Islamist enemy and suggested important ways to fight it.”
After discussing the positive aspects of this speech, Pipes remarks:

So far, perfect. But Salman avoids the bitter reality that the “twisted” and “barbaric” ideology he describes is specifically Islamic and the theocrats are all Muslim: “this war that we are engaged in cannot be against Islam, … Christianity, … Judaism, … Buddhism.”  So, when naming this ideology, Salman dithers and generalizes. He proffers an inept neologism (“theo-crism”), then harkens back to World War II for “fascist theocracy.” He implicitly rejects “Islamism,” saying he does not want a “debate about certain political parties, whether they’re Islamist or not.”

In fact, this sort of equivocation is typical of ostensibly moderate leaders and institutions throughout the Islamic world.  Consider Egypt.   One of the most appealing characteristics of President Sisi has been his outspokenness concerning the need for a more modern, moderate Islam.

For example, months before Sisi was elected president, I reported/translated the following:

During his recent speech at the Dept. of Moral Affairs for the Armed Forces [in January 2014], Gen. Abdul Fateh al-Sisi—the man who ousted former President Morsi and his Muslim Brotherhood in response to the June Revolution and who is seen as the nation’s de facto ruler—declared that “Religious discourse is the greatest battle and challenge facing the Egyptian people, and pointed to the need for a new vision and a modern, comprehensive understanding of the religion of Islam—rather than relying on a discourse that has not changed for 800 years.”

Sisi further “called on all who follow the true Islam to improve the image of this religion in front of the world, after Islam has been for decades convicted of violence and destruction around the world, due to the crimes falsely committed in the name of Islam.”

As with the pronunciations of Bahrain’s crown prince, so far so good.  Yet what has Sisi actually done about renewing Islamic discourse since becoming president?  “Absolutely nothing,” says one prominent Egyptian journalist.  Speaking recently on his popular TV show, Ibrahim Eissa said:

What is the position of the Egyptian government concerning religious radicalization among the religious parties?  And now I specifically refer to the position of President Sisi concerning this matter.  Five months have passed since he became president, after his amazing showing at elections.  Okay: the president has, more than once, indicated the need for a renewal of religious discourse….  But he has not done a single thing, President Sisi, to renew religious discourse.  Nothing at all.

Actually, if anything, it appears the Sisi government has done the reverse, for instance, allowing Salafis—those Egyptian Muslims most similar in ideology to ISIS—to return to the podium.  One political activist called this move

a major setback that will make it that much harder for the government to combat reactionary thinking—and this, after the Egyptian public had made great strides against such thinking….  Permitting the Salafi sheikhs to ascend to the pulpits again revives the bitter experiences of confronting this form of thinking, bringing us back to square one.

Individuals aside, what about important Islamic institutions that ostensibly condemn terrorism?  How influential are they?  This last December 5, the embassy of Egypt issued a press release saying,

Al-Azhar, the oldest center for Islamic learning, pressed for Muslims to combat extremist ideology at an international conference [possibly the same one that the crown prince of Bahrain spoke at] ….  Delegitimizing the ideology of ISIS is an important pillar of the global effort to combat the group. Egypt’s religious leaders play a critical role in that effort.

Good words.  Yet, for all its talk about “combatting extremist ideology,” Al Azhar University—perhaps Islam’s most authoritative voice—will not even denounce the Islamic State as “un-Islamic.”

When pressed on it, an Al Azhar spokesman, Abbas Shouman, recently said: “As an official entity, Al Azhar has never in all its history proclaimed anyone or any organization as un-Islamic …. [B]eing occupied by this question will not lead to anything,” because “Al Azhar will not judge ISIS or its Islam as un-Islamic, for it is not its right, neither concerning ISIS nor anyone else.”

But, as one human rights advocate in Egypt was quick to quip: “What, didn’t the ulema and sheikhs of Al Azhar denounce as un-Islamic Naguib Mahfouz and Farag Foda and others from among the intellectuals and writers whose activities were stopped and some of whom were assassinated due to Al Azhar’s position?”

Indeed, Farag Foda was a prominent Egyptian professor, writer, and human rights activist who was assassinated after being denounced by none other than Al Azhar.  And although Naguib Mahfouz won the Noble Prize for Literature, his literature was denounced by Al Azhar and, predictably, he was stabbed in the neck with a knife when he was 82-years-old outside his home.
What accounts for this stark double standard—that Al Azhar will vent against secular/humanist Muslims, thus inciting the mob against them, while refusing to denounce the cancerous Islamic State?  Or that it will denounce terrorism, but praise jihad (as in this bizarre article full of twisted logic and semantic quibbling)?

The Islamic State can never denounce the Islamic State as un-Islamic.   For the Islamic State is the working, postgraduate project for graduates from Al Azhar.  And after this statement [refusing to denounce IS as “un-Islamic”], Al Azhar’s mask has fallen….  Everything that the Islamic State does exists in the curriculum of Al Azhar and is taught to students, including apostasy [punishing Muslims who leave Islam], payment of jizya, sex slaves and the captivity of women.

At this late point in the game—as I write, Islamic jihadis are terrorizing Sydney, Australia—all purported Muslim moderates and reformers, individuals and organizations, need to understand—or rather, be made to understand by their Western counterparts—that talking the talk is no longer enough: they must walk the walk before they can ever be taken seriously.