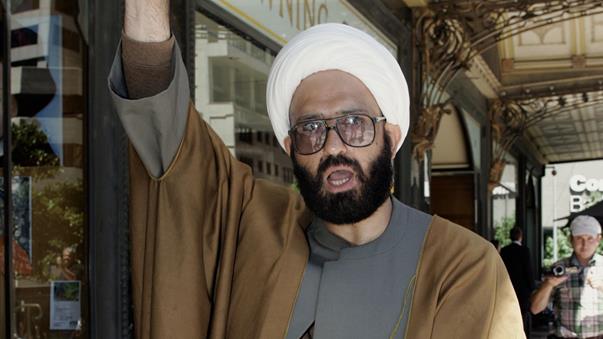 Hostage-taker In Sydney  named as radical Muslim cleric Man Haron Monis
Sheik Man Haron Monis. (AAP)
http://www.9news.com.au/national/2014/12/16/00/48/sydney-hostage-taker-named-as-man-monis#eSupFLGBsa9ms1RU.99
December 16.12.14
Radical Muslim cleric Sheik Man Haron Monis has been revealed to be the ringleader in the Sydney cafe siege that has seen up to 15 people held hostage since yesterday morning.
Monis was born Manteghi Bourjerdi and fled from Iran to Australia in 1996 where he changed his name to Man Haron Monis and assuming the title of Sheik Haron.
The self-styled sheik did not enjoy the support of mainstream Muslims, according to community leader Dr Jamal Rifi
He has gained media attention in the past for a “hate mail” campaign, protesting the presence of Australian troops in Afghanistan.
The campaign saw him and his partner Amirah Droudis post hate-filled letters to the families of dead Australian soldiers.
The family of Brett Till, an Australian solder killed by a roadside bomb in 2009, was just one of the families who received a letter.
“We sat in our homes, reading these letters … This man accusing my husband of being a child killer,” widow Bree Till said at the time.
9NEWS was given police clearance to release Monis’ name.
In November 2009 Monis appeared in court claiming to be a peace activist but later chained himself to the courthouse in protest of charges laid against him.
Monis escaped jail time but was sentenced to 300 hours of community service and placed on a two-year good behaviour bond in September 2013.
He again received attention from police in November last year when he allegedly organised the murder of ex-wife Noleen Pal.
Ms Pal had been stabbed and her body set alight in a Werrington apartment block, allegedly by Ms Droudis.
In April this year he was charged with sexually assaulting seven women while working as a spiritual healer in Wentworthville, where he claimed to be an expert in astrology, numerology, meditation and black magic.
In October Monis was charged with an extra 40 sexual offences relating to his work as a spiritual healer.
He is currently on bail and due to appear in court over indecent and sexual assault charges in February 2015.
Earlier this month Monis announced via his website he used to be a Rafidi, one who rejects legitimate Islamic authority and leadership, but “now I am a Muslim”.
© ninemsn 2014

Australian hostage taker named Man Haron Monis, Iranian refugee with criminal Past
SYDNEY (Reuters) – An Iranian refugee convicted of sexual assault and known for sending hate letters to the families of Australian soldiers killed overseas is the armed man holding an unknown number of hostages in a Sydney cafe, a police source said on Tuesday.
Man Haron Monis, an Iranian refugee and self-styled sheikh, remained holed up in the cafe some 15 hours after the siege began.
“There’s no operational reason for that name to be held back by us now,” said the police source, who declined to be identified.
(Reporting by Lincoln Feast; Editing by Mike Collett-White)