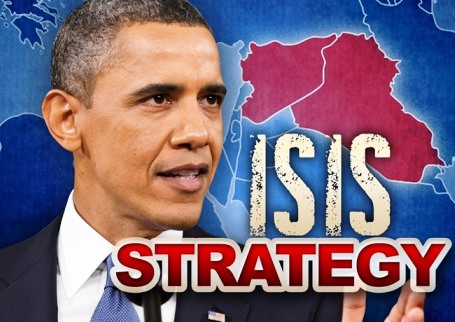 Barack Obama’s sole war benchmark must be success
David Ignatius| The Daily Star/13 October/14
What happens when an American plan for limited war against ISIS meets the savage reality of combat, as happened this week when the extremists pounded Kurdish fighters just inside Syria’s border with Turkey? The cry rose in Washington and abroad for more American military involvement. This is how conflicts that start off contained begin to escalate. Here’s President Barack Obama’s dilemma in a nutshell: He has proposed a strategy for dealing with ISIS that is, in the words of Harvard professor Graham Allison, “limited, patient, local and flexible.” This calibrated approach makes sense to Allison, one of America’s most experienced strategists, because it limits U.S. exposure in fighting an adversary that doesn’t immediately threaten America.
The problem is that military history, since the days of the Romans, tells us that limited war is rarely successful. Policymakers, when faced with a choice between going “all in” or doing nothing, usually choose a middle option of partial intervention. But that leads to stalemates and eventual retreats that drive our generals crazy. The warrior ethos says, “If you’re in it, win it.” The politician rounds the edges. Allison argued recently in The National Interest that other nations should bear the brunt of this war: “If our friends and allies … to whom ISIS poses an imminent or even existential threat are unwilling to fight themselves, to kill and to die for their own interests and values, Americans should ask: Why should we?” Frederic Hof, a former U.S. diplomat now with the Atlantic Council, sums up the bloody impasse on the Turkish-Syrian border as “a fine kettle of fish,” quoting a phrase used by comedians Stan Laurel and Oliver Hardy. He means that it’s a “confused, awkward, messy and even intractable situation,” with Americans and Turks, supposedly allies, castigating each other for taking insufficient action. “Don’t fight the problem. Decide it!” argued Gen. George C. Marshall, one of America’s wisest military leaders. In the Iraq-Syria case, this logic would identify the inescapable parameters of the conflict. Turkey is a difficult ally but an essential one; doing nothing against ISIS would be unacceptably risky, but total war isn’t a realistic option; the U.S. campaign may have begun awkwardly, but that’s no reason to panic.
Military history is usually a story of persistence and will, as commanders muddle through the bad opening months of battle. Marshall’s experience in World War II was a classic example: The North African and Italian campaigns were one disaster after another, as Rick Atkinson explains in his brilliant trilogy about the war in Europe. The U.S. kept stumbling forward to the D-Day landings and pushed on to eventual victory. America’s problem since World War II is that it has chosen to fight limited wars that had ambiguous outcomes, at best. This was the case in Korea, Vietnam, Iraq and Afghanistan. Only in the 1991 Operation Desert Storm did America win a decisive victory, but it had limited objectives and faced a weak adversary. As Henry Kissinger recently observed, the fight against ISIS comes when the American public is already demoralized by this chain of non-success. Frustration with no-win conflicts led Gen. Colin Powell to declare what came to be known as the “Powell Doctrine” – that America should go to war only when vital national security is threatened, the public is supportive, allies are on board and there’s a clear exit strategy. Obama, too, hoped to avoid frustrating, unpopular wars in Syria and Iraq. But his caution, however understandable, opened the door to ISIS.
I’d argue that even in the current fog of policy, there’s a discernible path ahead. Turkey is basically right in arguing for a buffer zone in northern Syria, protected by some kind of no-fly zone. The U.S. should start by providing anti-aircraft missiles to the CIA’s vetted and trained Syrian opposition fighters. This will boost the rebels’ popularity, in addition to stopping Assad’s planes. A buffer zone will give the U.S. time to train a real rebel army that can push ISIS out of eastern Syria and hold the territory until negotiations someday bring a new Syrian government. In Iraq, meanwhile, it will take months to train a Sunni force that can recapture Mosul and Fallujah, but the U.S. has at least stopped the extremists’ advance on Irbil and Baghdad, and recaptured the Mosul Dam.
Obama wasn’t wrong to have opted for a limited, calibrated set of weapons in this fight. But this doesn’t diminish the absolute requirement that he succeed with them.
**David Ignatius is published twice weekly by THE DAILY STAR.