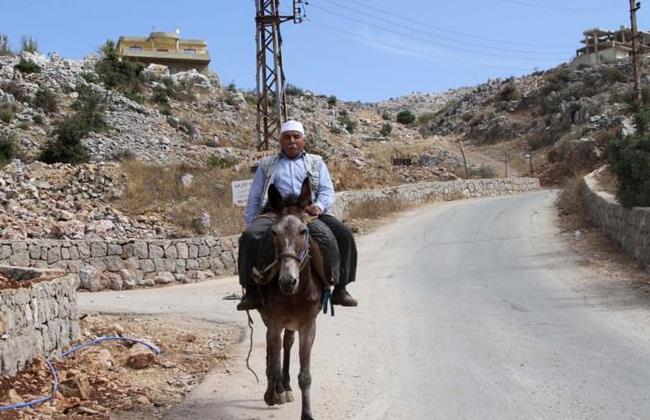 Hariri slams Hezbollah’s explosive message
Oct. 09, 2014
Hussein Dakroub| The Daily Star
BEIRUT: Former Prime Minister Saad Hariri Wednesday blasted Hezbollah over its bomb attack against Israel, saying using the border as a platform to send military and security messages would sink Lebanon into a new adventure.
The head of the Future Movement also said Lebanon could not remain shielded from the threat of terrorism while Hezbollah deliberately broke the rules of national consensus on addressing crucial issues.
Referring to the deadly weekend clashes between Hezbollah and the Nusra Front on the outskirts of the Bekaa Valley village of Brital, and Tuesday’s Hezbollah bomb attack that wounded two Israeli soldiers in the south Lebanon border region of Shebaa, Hariri said in a statement: “Is it right to keep silent and turn a blind eye to what is happening on the pretext of not disrupting the atmosphere and of the need to comply with the requirements of solidarity toward any action in the face of terrorism and the Israeli enemy?”
“Or are thumbprints required from all Lebanese to approve everything Hezbollah does and to justify its actions and policies?” he asked.
Hariri said he deeply regretted that some politicians viewed the existing risks in this manner, “while acknowledging Hezbollah’s exclusive right to set up military camps and wage wars in isolation from the state, the government and the [Lebanese] Army.”
“The insistence on adopting these options, whether they were made randomly or calculated on foreign agendas, does not only contribute to derailing national efforts in the fight against terrorism and extremism, but again raises the issue of departure from national consensus to act [unilaterally] as if the executive and legislative branches of power in the country do not exist,” Hariri said.
Hezbollah claimed responsibility for planting a bomb Tuesday that wounded two Israeli soldiers in the Israeli-occupied Shebaa Farms, two days after a Lebanese soldier was wounded by Israeli fire in the same area.The border incident came two days after Hezbollah fought pitched gunbattles with Nusra Front militants on the outskirts of Brital after the militants tried to seize party posts in the area. Hezbollah acknowledged the death of eight fighters, while security sources said at least 14 Nusra Front jihadists were also killed in the clashes.
Hariri said Hezbollah could not make a unilateral decision to exclude the Lebanese government from such operations. He added that national partnership was necessary so as not to implicate Lebanon “in the wars of others on our land or in the wars on the territory others.”
The Future Movement and its March 14 allies have criticized Hezbollah’s military intervention on the side of Syrian President Bashar Assad’s forces and repeatedly called on the party to withdraw its fighters from Syria.
“In this sensitive stage of our national life … Lebanon needs policies that unite and not divide and combined efforts under the ceiling of the state and its institutions to protect the country and ward off the threat of terrorism,” Hariri said. “But this matter will not be achieved amid the deliberate departure from national consensus and dragging the Army and legitimate military forces into battle and security missions set by Hezbollah’s operations rooms.”
Referring to the Shebaa attack, Hariri said: “Using the border as a platform to send military and security messages amounts to a new adventure and a step into the unknown that does not add to Lebanon any source of power.”
He renewed his call for the election of a new president to end the vacancy in the country’s top Christian post. “It is time to weigh the risks arising from [such actions] and devote efforts in all directions to protect the state from the power vacuum and seek an agreement immediately to end the presidential vacancy and build a new stage of national cohesion,” Hariri said.
Israeli army spokesman Lt. Col. Peter Lerner said Tuesday that “the Lebanese government and Hezbollah were directly responsible for this blatant breach of Israel’s sovereignty.”
But the attack took place in a disputed area, where the borders of Israel, Syria and Lebanon meet. Israel argues that the Shebaa Farms are part of the Golan Heights it occupies, but Lebanon and Syria say the enclave belongs to Lebanon. The U.N. says it is part of Syria.
The U.S. Embassy in Beirut strongly condemned the Shebaa attack and called on Hezbollah and the Lebanese Army to support U.N. peacekeepers’ efforts to restore calm in the border area.
“We strongly condemn Hezbollah’s attack along the Blue Line on the border between Israel and Lebanon,” the embassy said in a tweet. “We urge all parties to support UNIFIL’s efforts to restore calm immediately.”
Meanwhile, a joint committee from the Lebanese Army and UNIFIL inspected the border area to investigate the bomb attack that targeted an Israeli patrol in the Shebaa Farms. As the committee concluded its inspection tour, Israeli tanks were spotted roaming the western portion of the occupied Shebaa Farms.
Israeli forces also launched a surveillance air balloon 50 meters over the inspection site to snap shots of their work, security sources said.

Arqoub residents wary over Shebaa operation
Oct. 09, 2014
Mohammed Zaatari| The Daily Star
SHEBAA, Lebanon: Residents of Arqoub, which includes the southern districts of Kfar Shuba, Shebaa and Hasbaya, expressed mixed reactions to Hezbollah’s operation earlier in the week which wounded two Israeli soldiers, leading Israeli forces to fire a barrage of shells into the area.
Despite the Israeli attack, the sound of schoolchildren at play echoed through the streets of Kfar Shuba Wednesday.
“We don’t talk politics like most” in Lebanon, Mayor Qasim Qadri said. “We support the liberation of all occupied territories in our great south, including the Shebaa Farms and the hills of Kfar Shuba. I am not a military analyst, but there must be total coordination between the resistance and the Army.”
But not all residents seemed to agree with the mayor.
Abu Mohammad, a farmer, was returning from his fields on the back of his donkey when he stopped to share his thoughts.
He said that the operation was not carried out “at the right time,” adding: “I don’t think these operations work, so let us leave the work to the diplomats. We’re tired.”
On Tuesday, Hezbollah claimed responsibility for planting a bomb that wounded two Israeli soldiers in the occupied Shebaa on the southern border, two days after Israeli fire wounded a Lebanese soldier. Israel responded by firing at least 15 artillery rounds into an area not far from civilian residences, causing no casualties. The operation was the first to take place in the area in years.
Abu Afif, a passerby, echoed Abu Mohammad’s sentiments.
“I support the liberation of the Kfar Shuba hills, the Shebaa Farms, the Golan Heights and every grain of soil, but not from here,” he said.
Arqoub is predominantly Sunni, and historically has been steadfast in its support for any armed resistance against Israel, whether led by Palestinians, Lebanese nationalists Islamist groups or Hezbollah.
Following the 1967 Arab-Israeli war and the signing of the Egyptian-brokered Cairo Agreement three years later, the area became known as “Fatah Land,” after Lebanon granted Palestine Liberation Organization factions, led by the Fatah Movement, the right to launch military operations against Israel from Arqoub. The area was considered especially strategic for its proximity to the Golan Heights and the West Bank.
Due to its links to the resistance, the area came under devastating attack by the Israelis throughout the early 1970s.
In recent decades, the affiliation of the area changed, and now most support the Future Movement and Al-Jamaa al-Islamiya, while some residents still back Leftist parties.
But despite this trend, those living on the border have continued to support the resistance and a number of locals gave their lives fighting against Israel alongside Hezbollah in the July 2006 war.
A testament to its unique political makeup, pictures of assassinated former Prime Minister Rafik Hariri and his son Saad Hariri hang at the entrance to Kfar Shuba alongside those of Hezbollah fighters from the village who died in the 2006 war.
Nearby Shebaa, home to 6,000 displaced Syrians, was targeted by dozens of Israeli shells in response to Hezbollah’s attack Tuesday.
Abu Hussein Nabaa, a laborer, said that Hezbollah’s operations “bring us the woe and destruction of Israel’s response, and do not forget that there are thousands of Syrians. Where can either of us go?”
But Mahmoud Zahra, a shepherd, saluted the resistance and its recent operation.
“I support the return of [military] operations and the resistance, which preserves our dignity and honor,” he said. “ Israel did not dare cross the Blue Line, which was drawn by the United Nations. But with the cessation of [Hezbollah] operations, Israel arrests us and shoots us every day. I am with the deterrence of the Lebanese Army and the resistance.”
A displaced Syrian who called himself Abu Abdo said: “As Arabs, we are all with the resistance, so let Hezbollah pull out of Syria and we will all support it.”
Mohammad Jirar, the public relations officer of Al-Jamaa al-Islamiya in Shebaa, emphasized his support for armed resistance and the return of occupied lands, but voiced suspicion over the timing of the operation, noting that Hezbollah had not carried out military operations in the region for the past eight years.
“We support the return of operations to the Shebaa Farms to legitimize military action in the face of the Israeli enemy, as this land is occupied,” he said, but added: “Why now?
“We have been resisting since before [Hezbollah’s] resistance … we are at the forefront of resistance,” he said.
Shebaa’s mukhtar, Abdo Hashem, also qualified his support for the resistance.
“We are with the resistance, but we have a delicate situation and more important matters … we fear for the displaced [Syrians],” he said.