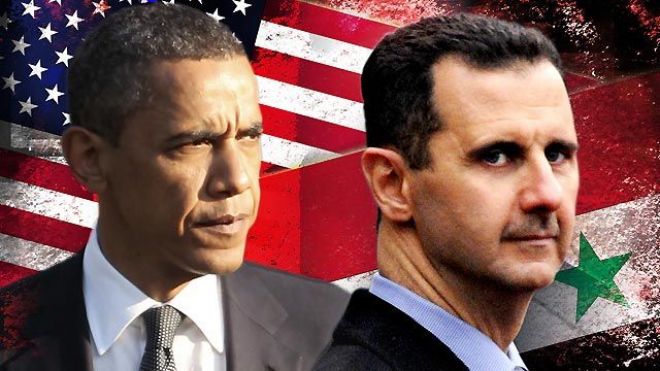 President Barack Obama’s attitude toward the Syrian conflict is the equivalent of wanting to win the lottery without buying a ticket. Obama has used his aircraft to bombard ISIS in Syria, but the president does not want to do anything yet, or allow his allies to do anything, that may affect military outcomes there.
This attitude has been highlighted in American-Turkish differences over Kobani, or Ain al-Arab. The Turks seek to create safety zones inside Syria, which would include no-fly zones. But the Obama administration fears this would decisively shift the balance of power against the Assad regime and bring about its sudden collapse, which may benefit the jihadists.
The Assad regime is indeed living on borrowed time. It has been taking heavy losses in recent months, which are unsustainable, and it does not have enough manpower to regain and control significant territory. President Bashar Assad’s sole option is to try to survive, another way of saying he cannot win.
In this context, the Turks have been telling the Americans that the anti- ISIS campaign must, above all, lead to Assad’s removal. Obama is resisting pushing in such a direction, even though this contradicts the logic he has used in Iraq. There, he has affirmed that only a more inclusive political system, one that integrates the disgruntled Sunnis, can bring about an ISIS defeat.
Why does he refuse to acknowledge a similar argument for Syria? Unless the ultimate objective is to get rid of Assad and impose a more inclusive political system, none of the rebels, moderate or otherwise, will have much motive to fight ISIS.
This is obvious to the Turks, and everyone else, but the Obama administration still clings to the illusion that one can become half pregnant. Obama’s caution in Syria is perhaps understandable, but now that he has outlined a strategy to deal with ISIS, he cannot afford to hesitate midpassage. And yet all we see is an unwillingness to accept the inevitable.
If Washington’s view is that the only way for the anti- ISIS offensive to work is if there are troops on the ground, it should accept that those with troops may have agendas different than that of the United States. Obama’s priority is ISIS, but in the region the countries are struggling with much more than that, including a massive and potentially volatile refugee population, economic uncertainty, the presence of foreign armed groups in their midst and along their borders, and much more.
To assume that such countries will embrace an effort principally to weaken ISIS while nothing is done to affect the dynamics of the Syrian conflict, which has created all the problems that they are now facing, is the height of self-centered conceit. If Obama ever thought that was possible, he needs to hire foreign policy advisers who will tell him the truth.
Nor is doing nothing a solution. Even people close to the Syrian regime are quietly saying Assad will not last. If America is discouraging Turkey from intervening because it fears the sudden downfall of the regime, that downfall is likely to come anyway. And the U.S. had better prepare for it now to avoid picking up the broken pieces if the jihadists take Damascus.
That is why the outlines of a political solution are necessary. There are those who point out that such a solution comes too late. It may, but the international community cannot afford not to have a political plan to guide a transition in Syria, one that creates a context for its air attacks against ISIS. More important, such a plan would show the United States is serious about resolving the crisis in Syria, which would give it greater leverage to rally “moderate” opposition groups to its side.
The principles of such a political plan are well known. They must involve Assad’s departure; a commitment to protect the Alawite community, perhaps by deploying a joint Arab military force; a fundamental reform of the army and security services; repatriation of Syrian refugees in secure conditions; outside commitment to rebuild the Syrian economy; the elimination of terrorist threats; and agreement on a new political structure for Syria – whether federalism or some other arrangement.
These are all fine principles, each of which poses great challenges. But the West and the Arab world need a road map in Syria. Ideally, they could discuss this with Iran and Russia to try to arrive at a managed transition.
But neither Moscow nor Tehran is willing to give up on Assad just yet, particularly not when the international coalition is pounding ISIS. Yet the Russians, like the Iranians, can also increasingly see that the man they have supported, and in whom they have invested considerable political and financial capital, is losing.
Hence, the need for the West to have a plan it can eventually submit to Iran and Russia for when the balance of power shifts decisively against Assad. At some stage Syria will require a postwar arrangement, and building a consensus around a plan can be very helpful. Recall that in Lebanon ideas for reform first raised in 1976 were revived more than a decade later and made a part of the Taif Accord. Most important, by accepting such an approach, Obama will show that his campaign against ISIS is part of a broader package to normalize the situation in Syria.
The Americans must accept that for three years they neglected Syria and allowed the situation to deteriorate to the point where they have to intervene today. Against this backdrop, having narrow objectives there makes little sense. Syria may be a problem from hell, as some commentators have written, but allowing it to remain in order to focus on ISIS is absurd. ISIS grew because the situation in Syria was so bad. Obama gains nothing by curing the symptom while ignoring the illness.
**Michael Young is opinion editor of THE DAILY STAR. He tweets @BeirutCalling.