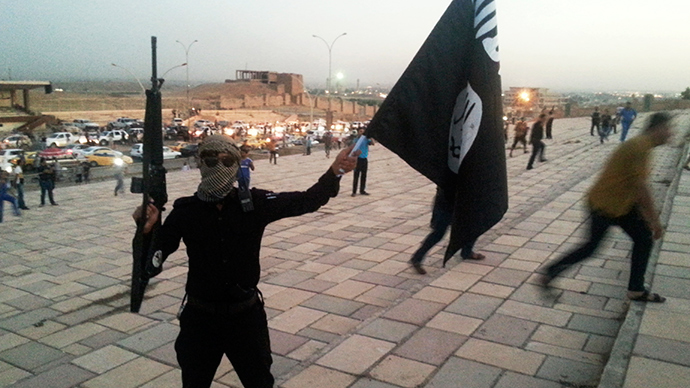 Islamic State militants are planning to insert operatives into Western Europe disguised as refugees, claim US intelligence sources, who unencrypted locked communications of the caliphate’s leadership.
The militant organization is afraid of using aircraft due to strict security rules, so they use land as an alternative, the US sources told Bild Am Sonntag, a German national Sunday newspaper.
Disguised as refugees from Syria, Islamic State (IS, formerly ISIS) operatives will cross the border to Turkey. Then, using fake passports, they will travel further to European countries to conduct attacks.
“In view of the chaotic conditions on the Syria-Turkey border, it is nearly impossible to catch ISIS-terrorists in the wave of refugees,” wrote Bild Am Sonntag.
Because hundreds of refugees cross the Syrian-Turkish border every day, the jihadists have a good chance of remaining unnoticed in the crowds.
Turkey is also used by jihadists who want to join the IS in Syria, as they don’t need a visa to get there. They go on ‘vacations’ as tourists and upon arrival have almost no trouble finding a way to cross the border.
According to one of Iraq’s foremost security experts with unique access to intelligence, at least 100,000 jihadists were fighting in the ranks of the IS in August.
There are some 15,000 foreign fighters from the IS in Syria alone, including 2,000 Westerners, a US intelligence official told AFP in September.
Germany continues to be one of the main goals of IS
An official from the German Interior Ministry told the paper that the country is in the “focus of jihadist terrorism,” but there is no indication at this time of any concrete attacks.
German security says that about 450 extremist German Muslims traveled in the direction of Syria.
But it is still nearly impossible to track their country’s radicals when they are heading from Germany to Syria, as they don’t need a visa to travel to Turkey, a German official told the Jerusalem Post.
About 150 Islamic fighters have returned from Syria to Germany.
Last week it was revealed that German authorities encouraged some jihadists to leave the country. Ludwig Schierghofer, the chief officer in charge of counterterrorism at Bavaria’s LKA investigative police department, told public broadcaster Westdeutscher Rundfunk that such measure is aimed at “protecting our [German] population.”
The issue was “to get people out of the country” if there was evidence that “the danger existed that they might commit attacks.”
“If somebody had become radicalized and wanted to leave the country, then we tried to either let him depart, or even sought to accelerate their departure using legal means,” Schierghofer said.
The measure was introduced in Bavaria, southeastern Germany, in 2009, but then abandoned in 2014 after the authorities understood that they were actually helping IS militants.
IS continues Middle East advance despite US strikes
US-led airstrikes on the Islamic State are failing to stop the advance of the jihadists.
The militants are reportedly approaching the outskirts of the city of Kobani, a town in the Aleppo Governorate in northern Syria near the Turkish border.
The situation in the town prompted some 186,000 Kurds to flee the area across the border into Turkey, and groups of Kurdish volunteers wishing to cross into Syria to defend the town against the IS on Saturday clashed with tear gas-firing Turkish security forces refusing to let them pass.
Around 100,000 people remain in Kobani amid the violence.
Enemy tactics: Kurdish female suicide bomber ‘attacks ISIS jihadists’ in Kobani
“Those who stay in the area are living in very poor conditions, there is drastic shortage of food,” Muhammad, a Kobani resident, told RT.
According to Osman, a Turkey-Syria border resident, Turkish security forces prevent them from helping the Kurds, but the residents of Kobani will continue to assist them where they can.
“We are eyewitnesses of the event. It seems that the whole world has abandoned Kobani,” he told RT. “If the Kurdish forces don’t get the supplies they need there will be a mass slaughter among the Kurdish population.”
He added that so far the local residents “haven’t seen any results of US strikes against the Islamic State.”
By mistake? US-led jets bomb grain silos in Syria, ‘civilians killed’