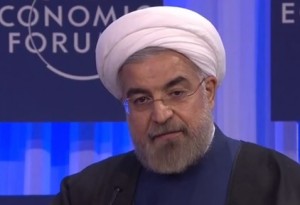 Compared to Iran, ISIS is a ‘Junior Varsity’ Team
October 5, 2014
Eytan Sosnovich
The Algemeiner
http://www.algemeiner.com/2014/10/05/compared-to-iran-isis-is-a-junior-varsity-team/
Last month, in a primetime national address, President Obama laid out his four-pronged strategy to “degrade and ultimately destroy ISIS.” The U.S. military has already begun to carry out the President’s directive; airstrikes against ISIS positions in Iraq have increased and we can likely expect a prolonged campaign against ISIS strongholds in Syria in the very near future.
While the efficacy of the President’s approach – which is based on never involving American combat troops – is questionable, his objective – the destruction of ISIS – is no doubt a reasonable goal. Not only does ISIS pose a clear threat to the United States and its allies, it is also by any measure a morally reprehensible organization, seemingly committed to violating any and all international standards of human rights.
But there is an equally grotesque actor in the Middle East, one who is also guilty of deplorable human rights abuses. This entity, like ISIS, treats women and minorities like second class citizens; like ISIS, it performs grotesque public executions of those guilty of committing the “perverse sin” of being gay; like ISIS it attacks and jails Western journalists and human rights defenders; and like ISIS, it poses a clear and direct threat to the United States and its allies. This actor is of course the Islamic Republic of Iran. And while President Obama and his European counterparts are committed to eradicating ISIS, they are seemingly equally committed to allowing the Iranians to attain nuclear capability.
Despite the best efforts of the nations of the P5+1, Iran is – according to a report published earlier this month by the International Atomic Energy Agency – still actively producing reactor grade uranium. The report also asserts that the Iranians have blocked IAEA access to the site at Parchin, the facility that according to Israeli intelligence is being used to conduct nuclear detonation research. And perhaps most concerning, Iran continues to develop advanced ballistic missiles capable of striking Israel and other U.S. allies.
ISIS is more than just a convenient distraction for Iran; it also provides the Iranians with geopolitical leverage. Iran is in the unique position of serving as a viable regional counter to ISIS, which could swell Iran’s influence in the region, especially among Shiites. ISIS also functions as a bargaining chip in future P5+1 negotiations that are scheduled to conclude in November. And if the United States and its European allies remain bogged down in a long engagement with ISIS, it is unlikely the U.S. would opt to also directly engage Iran militarily should a deal fail to be reached. It should then come as no surprise that Iranian negotiator Majid Takht-Ravanchi said just a few weeks ago that Iran would not sign a deal “at any price.” With everything else happening in the region, relaxed sanctions, and the ability as evidenced by the latest IAEA report to continue work on its nuclear program, why should they?
With the UN General Assembly wrapped up, it is important that the United States and its allies keep the eye on the ball. Yes, ISIS is a despicable organization that should be wiped out. But ISIS compared to Iran is, as the President once said, “junior varsity.”