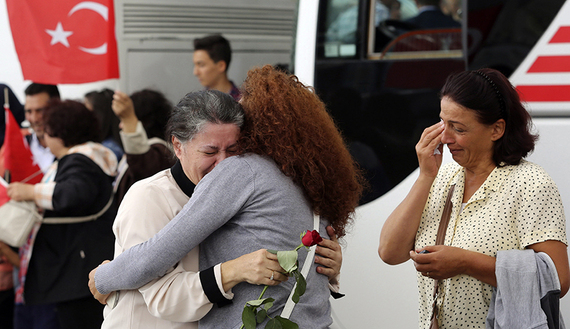 Turkey swapped 180 IS militants for 49 hostages
Al-Monitor: The Pulse of the Middle East
http://www.al-monitor.com/pulse/security/2014/10/turkey-iraq-syria-isis-hostages.html?utm_source=Al-Monitor+Newsletter+%5BEnglish%5D&utm_campaign=a8f8f63725-October_3_2014&utm_medium=email&utm_term=0_28264b27a0-a8f8f63725-93111661
Details of the exchange made with the Islamic State (IS) to release 49 Turkish hostages are becoming clearer after President Recep Tayyip Erdogan signaled at an exchange by saying, “So what if there was an exchange?”
In return for the consulate personnel, 180 militants were handed over to IS, including some senior officials of the organization: 180 IS personnel were first assembled at Van and then delivered to IS in batches.
This is the background of the release of the 49 hostages:
The process began with the US air attacks against IS. The United States asked Turkey not to release IS militants undergoing medical treatment in Turkey and warned Turkey not to free IS people apprehended in Turkey. IS, for its part, pressed the government to release the detained IS personnel and those undergoing treatment.
The AKP government, squeezed by the United States and IS, then developed an exchange formula to hand over IS militants in Turkey in return for hostages. It was claimed that with this diplomatic formula Turkey ensured the release of the hostages while getting rid of the IS people on its territory. Turkish security units were not directly engaged in an operation during the release of the hostages.
Notables of pro-US Iraqi tribes played an important role in the exchange process. After the agreement was reached, IS brought the hostages to the border and informed the Turkish National Intelligence Organization (MIT). There, Turkish security units took over the hostages. The release of IS militants followed the release of Turkish hostages and took about one week. IS militants undergoing medical treatment and those detained in prisons were brought forth and held in Van before being delivered to IS in batches. It is not yet known whether the IS militants who attacked police at Nigde were among those handed over. Reports say they were included in the initial list of IS militants to be released, but were taken off the list after reactions.
No weapons were given or money paid for the hostages. But in the very first days of the crisis, a certain amount of money was paid to IS officials. Release of hostages also revealed three power centers involved in the issue. After the release of hostages, the presidency, the prime ministry and MIT mobilized their supporters in the media to play up and glorify their roles. This was seen as the first secret power struggle in Ankara since Erdogan became president. Ankara political circles say this was the way MIT chief Hakan Fidan conveyed a message of “I count also.”