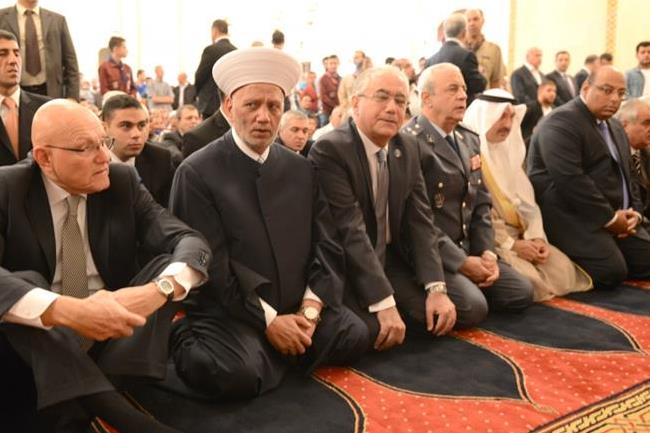 IS fighters ‘repugnant to Islam,’ Muhammad show tells Calgary audience
CBCCBC – 04/10/14/There was a full house at the Calgary Jubilee Auditorium Thursday night for a show detailing the life of the Prophet Muhammed and the message of peace that underlies his teachings. Organizers hope The Astonishing Story of the Prophet will remind non-Muslims that the vast majority of Islam’s adherents do not share the radical views espoused by ISIS. The insurgents — who call themselves the Islamic State in Iraq and Syria (ISIS) — have taken control of large sections of both countries, committing atrocities along the way in the name of Allah. Lal Khan Malik, the national president of Ahmadiyya Muslim community, which put on the show, says ISIS twists the teachings of Mohammed. “They are doing something which is repugnant to Islam. It is a shame to Islam and it is a shame that they are using this name,” he said. The show has been touring across the country. Its next stop is the University of Saskatchewan in November.

Eid al-Adha: binding celebration
The Daily Star/Oct. 04, 2014
The Eid al-Adha holiday, punctuated by the arrival of more than 2 million pilgrims in Mecca, is traditionally a time when Muslims celebrate a centrally important religious occasion, steeped in social and cultural significance. But this year’s Eid comes at a crucial time for the world’s Muslims and many other concerned people – in the headlines every day are the latest developments in the war being waged by an international coalition of countries against a group claiming to represent Islam. Perhaps no time in recent memory has seen such international attention focused on Islam and Muslims, while sectarian tension, pitting Sunnis against Shiites, is rife in several critically-important areas of the Middle East. This year’s Eid al-Adha should serve as a wake-up call of the utmost seriousness, on several levels. Sunnis and Shiites should pause to undertake a profound examination of the spirit of this holiday and focus resolutely on their many common denominators. They should realize the immense richness of their shared traditions and disregard those ill-intentioned parties, from inside and outside Islam, who focus only on the differences.Moreover, Islam itself has been hijacked by a group of ultra-extremists who have distorted centrally-important aspects of the religion – media around the world are paying daily attention to the actions of this group, subtly brainwashing people into thinking that they are somehow representative of Islam. Many people in conflict-ridden Arab and Muslim countries might not find much joy in this year’s Eid because they have lost family and friends to violence; things will become even bleaker if they do not pledge themselves to act, and begin reversing the damage that has been done, to both the reputation of Islam and the lives of Muslims.

North Lebanon mufti:, Sheikh Malek Shaar Roumieh detainees face blind injustice
The Daily Star/Oct. 04, 2014/BEIRUT: The continued detention of young Muslims in Roumieh Prison without trial is “blind injustice,” north Lebanon Mufti Sheikh Malek Shaar said Saturday, urging Tripoli residents to remain under the umbrella of the state. During his sermon for the Eid al-Adha festival, Shaar also spoke against extremist groups tarnishing the image of Islam, saying the religion called for equality and justice for non-Muslim communities. “In the Arab and Muslim worlds, in Lebanon and in Tripoli, we suffer from injustice. Injustice at our institutions, the port, the airport, the Lebanese University, and other institutions,” Shaar said at the Mansouri Mosque in the northern city of Tripoli. “We are witnessing a collapse of infrastructure with problems in supplying water and electricity, roads and so many other issues.”“This blind injustice has also affected hundreds of young Muslim men detained in Roumieh Prison for years without trial, without a proper investigation, without direction. How could the state to be hostile toward its citizens?” Shaar also addressed young men in Tripoli who have grown frustrated with the injustice in their city and what they deem discrimination against the Sunni community, urging them to refrain from acts that could endanger the country. “To the young, enthusiastic men who are riled up in Tripoli and the north, I want you never to carry arms on the nation and against citizens. I warn you against moving the battle here between us; between the city and security institutions such as the Army and security forces.” “I warn you against raising slogans that could destroy the country.”
“We understand the injustice on us and the pain you feel but have confidence that we will not be lenient or back down from achieving this city’s goals.”“I warn you against doing injustice on your city as a result of others’ injustice on you.”Shaar defended Islam against the rise of extremist groups such as ISIS, which has taken swaths of land in Syria and Iraq while forcing many to flee and persecuting those who are left behind. “This Muslim Shariah forbids us from even cutting a tree but paying much respect to the human being as the creation of God. It also forbids us from violating churches because they were built under Islamic laws.” “This Shariah ordered us to preserve the human being, primarily women, the elderly and children, and to apply justice with Christians and Jews as long as they never attack us.”
“ Islam carries a message of forgiveness and embracing of others. … Islam’s Shariah does not stipulate persecution and killing but freedom, justice and equality.”
Lebanon grand mufti, Abdul-Latif Derian calls for religious, political reform
Oct. 04, 2014/The Daily Star/BEIRUT: Lebanon’s grand mufti, Abdul-Latif Derian Saturday deplored crimes committed by extremist forces in the region, saying such elements knew nothing about Islam, and called for religious and political reform and better care for the youth. “What we are witnessing today of atrocities in the name of religion is proof that those who are committing such crimes know nothing about religion,” Abdul-Latif Derian said in his Eid sermon, the first since his election, at the Mohammad al-Amin Mosque in Downtown Beirut. “We are today stuck between strife and crisis. Strife is forcing us to commit violations and carry out attacks and the crisis lies in our domestic conflict.” “The strays and those who carry arms want people to do the same and depart from the nation.” Derian gave his sermon in the presence of Prime Minister Tammam Salam as well as a delegation of Future lawmakers and Saudi Ambassador to Lebanon Ali Asiri. Walking on a red carpet stretching from the entrance of the mosque to the street, Derian made his first official appearance as mufti accompanied by Salam. In his sermon, Derian spoke of coexistence and the need for communication among the country’s various sectarian and political groups. “Absolute equality between religions, individuals and peoples should not mean hostility but peace and unity because the latter is the source of our strength,” he said.“Understanding religions means to coexist with other citizens of the nation and people of the world. … Let us move be more affectionate and communicate with one another.”
The mufti, whose election ended a long simmering rift between the main Sunni political groups and Dar al-Fatwa, stressed the need for rehabilitation of political and religious institutions for coming generations. “It is our responsibility to rehabilitate political, national and social life as well as [enact] reforms in institutions and at the level of education in terms of culture and religion,” he said. “We are in need of reforms in religious education as well as charity organizations because these organizations are meant for everyone, not a specific group.”
“Our youths need to feel that they are cared for and that their society provides them with needed confidence and resources,” Derian said. “We are responsible for these young people and society before the security and military institutions and we should care for them so they can trust us. “We should not leave them or neglect them while we complain of divisions.”

Saudi Grand Mufti: defeat forces sowing chaos
AFP, Mount Arafat /Saturday, 4 October 2014
Muslim leaders must strike the enemies of Islam with “an iron hand,” Saudi Arabia’s top cleric said during Friday prayers, in apparent condemnation of the Islamic State jihadist group. Grand Mufti Sheikh Abdul Aziz al-Sheikh’s comments came after Saudi Arabia and four other Arab nations joined the United States in aerial bombardment of the ISIS militants in Syria.Speaking to Muslims from around the world in an address during the annual hajj pilgrimage, the mufti called on fellow Islamic leaders to “hit with an iron hand the enemies of Islam.”The ISIS group has declared a “caliphate” straddling Syria and Iraq where they have committed a spate of atrocities including crucifixions and beheadings. “Your religion is threatened. Your security is threatened,” he thundered, according to the official Saudi Press Agency. “These criminals carry out rapes, bloodshed and looting,” he said, adding that “these vile crimes can be considered terrorism” and their perpetrators have nothing to do with Islam. “They are tyrants,” he said, warning of “their deviant ideology.”
The mufti spoke from Nimrah Mosque at Mount Arafat in western Saudi Arabia, home to Islam’s holiest sites. Close to two million Muslims from around the world were gathered at Mount Arafat for a day of prayer at the peak of the annual hajj.
The comments were the mufti’s latest criticism of the extremists. In August, he urged Muslim youth not to be influenced by “calls for jihad … on perverted principles,” and he described al-Qaeda and ISIS jihadists as “enemy number one” of Islam.
The kingdom is seeking to deter youths from becoming jihadists after Syria’s conflict attracted hundreds of Saudis. King Abdullah decreed in February jail terms of up to 20 years for citizens who travel to fight abroad.

Assad makes rare public appearance at Eid prayers
AFP, Damascus /Saturday, 4 October 2014
Syria’s President Bashar al-Assad made a rare public appearance on Saturday, attending prayers on the Muslim Eid al-Adha holiday at a mosque in Damascus, state media said. State media and Assad’s official Twitter feed posted photos of the embattled president praying alongside the country’s top cleric and members of his government. “President Bashar al-Assad leads Eid al-Adha prayers at the Nuaman bin Bashir mosque in Damascus,” state news agency SANA said. Adnan Afyouni, Damascus’s top cleric, used his sermon to criticize the international community for backing an uprising against Assad that began in 2011. “Eid is associated with happiness in the life of the Muslim nation,” he said.  “But Eid has not entered our homes because the West and its Arab collaborators decided to make our country a battlefield… and implement interests and agendas,” he said. Syria’s government has long accused Western and Arab backers of the uprising against Assad of supporting “terrorism” and trying to destroy the country.
“We pledge to God almighty to protect our country from a great conspiracy that targets its role and presence and resilience,” he said. “We pledge to keep the country from being turned into a war zone, torn apart and divided,” he said, referring to “plans drawn up at the White House and carried out today in north and east Syria.” The comments appeared to be a reference to strikes by a U.S.-led coalition against the jihadist Islamic State group, which has strongholds in the north and east of the country.
More than 180,000 people have been killed in Syria since the beginning of the uprising against Assad in March 2011. The country’s conflict began with anti-government demonstrations, but spiraled into a vicious civil war after the regime opened fire on protesters.