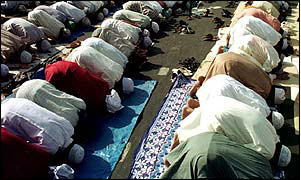 Will Islam Address Its Internal Crisis?

by DR. LAINA FARHAT-HOLZMAN
September 26, 2014
Family Security
http://www.familysecuritymatters.org/publications/detail/will-islam-address-its-internal-crisis?f=commentary
Muslims have lived so long with governments they cannot trust that the rumor mill serves as their source of information. Conspiracy theories are the favorite explanations for all the horrors in the world. If you cannot blame Allah, you must find someone you can blame.
The latest conspiracy theory comes out of the Netherlands, where a Muslim woman, Yasmina Haifi, who works in the Dutch Ministry of Justice and Security, has given us the following: “The Islamic State isn’t Islamic at all. Actually, it’s a Jewish plot.” [http://www.investigativeproject.org/4535/isis-a-jewish-plot-propaganda-and-islamic-jihad]. She tweets that IS leader Abu Bakr al-Baghdadi is an agent of Mossad and that the conspiracy was created to make Islam look bad. If I were Dutch, I would ask: Who hired this dim bulb?
Mossad does not have to make Islam look bad. The religion is in crisis, and the reasons for looking bad include decapitating captives and enslaving captive women and children. The “Islamic State (IS)” is just one more faction attracting bored and unemployable young men looking for adventure and being reassured that the violence they are expected to carry out is sanctified by the very origins of their religion.
The other two Westerm world religions have changed over time, evolving from primitive tribalism to religions that promote ethical behavior and rule of civil law (Judaism and Christianity). These religions have experienced reformations and transformations from their darker periods. Islam has not so benefited. It began the process of evolving during the first centuries of its existence with the emergence of many “schools” representing different interpretations of the religion. It started acquiring a legal structure and a way of incorporating methods and ideas from non-Muslims: Jews, Nestorian Christians, Persian Zoroastrians, and even Central Asian Buddhists. These contributors produced the brief “golden age” so boasted about by Muslims today.
Islam’s linear evolution was shut down in the 13th century by Mongol invasions from the East and from savage Muslim invasions of Spain by Africa fanatics. Baghdad was burnt down and Spain’s Islalmic golden age went dark. These events sent Islam into a five-century sleep in which their once dominant civilization became backwaters ripe for European colonization.
An unacknowleged benefit of European colonization of Muslim lands was an awakening. Some wanted to join the process of modernization that would once more free Muslim talent. Unfortunately, they chose instead the fascist model and now the tribal model. Resentment, revenge, savage violence, and that most hot-button issue of all, the emancipation of women, have created an Islamic monster that cannot ultimately survive.
The Dutch Muslim woman quoted above cannot bear to think her religion can be as terrible as ISIS practices it, yet ISIS is accurately reproducing the deeds of the Prophet Mohammad and his followers, santified, they say, by Allah. The Koran tells us that the Prophet urged followers to “smite the necks of unbelievers” and “cut off their fingertips” (supposedly to prevent their enemies from holding weapons, but unneccessary if they have already had their necks smitten).
The Prophet demonstrated and sanctified the methods of warfare that we are seeing today: deception (guerilla war) and giving the defeated the options of converting, paying a tax, or death. For those refusing his options, he sanctified killing all males and seizing all women and children as booty, using them as “the captors liked.” He also expelled all non-Muslim tribes from Arabia, exactly what ISIS is doing now.
Boka Haram and ISIS are not only following those methods, but are demanding that all Muslims follow or face the consequences. Their momentary successes are giving not only the world, but the Muslim world, a chance to see what 7th century Islam looked like. Without a renaissance, this is all they will have.
The rest of the world will not wait. This is the start of a global war against what Islam has become. Good Muslims everywhere had better fight ISIS, Boka Haram, the Muslim Brotherhood, and Hamas. If they want their religion to survive, they will have to create a modern Islam that can do more than just destroy. It is crisis time.
FamilySecurityMatters.org Contributing Editor Dr. Laina Farhat-Holzman is a historian, lecturer, and author of How Do You Know That? You may contact her at Lfarhat102@aol.com or www.globalthink.net.