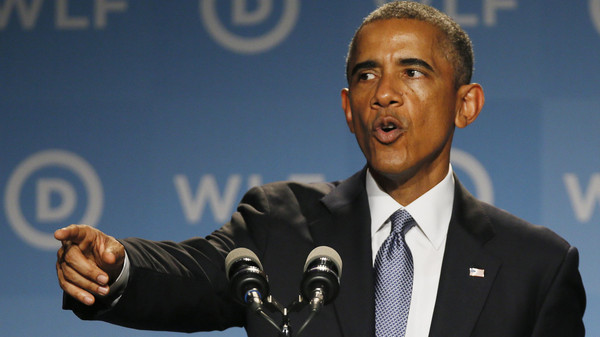 Thank you Obama for joining the anti-ISIS alliance
Wednesday, 24 September 2014
Abdulrahman al-Rashed /Asharq Al Awsat
American President Barack Obama is happy he built an alliance of 20 countries, including five Arab states, to fight the Islamic State of Iraq and Syria (ISIS) organization. An American friend commented, saying the truth is that Obama is the one who joined the alliance and not the other way around. He has finally been convinced, after declining for two years, and announced the U.S.-led dawn attacks on ISIS positions in Syria on Tuesday. This is the fourth American war in the region. The war on ISIS in Syria is different from the previous American wars of liberating Kuwait and toppling Saddam Hussein and the war against al-Qaeda. These wars were widely opposed by many countries, people and groups. However, this war against ISIS enjoys wide international, Arab and Islamic popular support. Even those who reject the campaign have done little to voice their disapproval. In this war, there is also great competition among countries as Iran wanted to be the U.S.’s major partner in the alliance. Iran first announced this in order to provide for the safety of the Syrian regime and to launch a new era of relations with Washington – an era that maintains its regional influence. On another hand, Saudi Arabia and the Gulf countries wanted to be the U.S.’s major partner to obstruct Syria and Iran and guarantee the West’s commitment to fight against ISIS.
“ Truth be told, we are the ones who were calling on the American president to intervene and he’s the one who objected to the idea”
Regardless of the wide support Obama has now garnered, the situation can only be judged by its results. Victory may not be easy in this war despite the regional and international cooperation and enthusiasm. ISIS is four times bigger than al-Qaeda at its peak under the late Osama bin Laden’s leadership. ISIS’s number of fighters, weapons and funds make it a fierce enemy. Therefore, unlike previous wars, maintaining Arab and Islamic popular support of this war is a necessity for its victory. ISIS lives upon people’s sentiment and faith and it has so far not given much attention to political incitement or perhaps it thinks it’s not the time for this yet. The organization will seek to convince the public opinion that the conspiring West is fighting an Islamic group that supports the repressed people in Syria and Iraq. There are regional powers, like the Iranian and Syrian regimes and the Muslim Brotherhood, which want to deepen the crisis and will try to depict the war as a call for a fresh American invasion!
Truth be told, we are the ones who were calling on the American president to intervene and he’s the one who objected to the idea. However, all parties harmed by ISIS have now agreed to the alliance and are participating in the attack. We will insist on saying that President Obama will not win in Syria without the support and participation of Syrian parties, particularly the Free Syrian Army and other similar factions. American Tomahawk missiles and the alliances’ warplanes will not be enough to deter the terrorist groups who will flee and hide in Syrian cities and towns. This is what made the Assad regime issue contradictory statements in a confused situation as it does not know which stance to adopt. At the beginning, the Syrian foreign affairs minister said his regime will not allow that its airspace be violated without its permission. The Americans responded and said they will not ask for its permission. Syria’s representative at the United Nations then told the Americans this would be a violation of sovereignty and international law. The Americans responded and said that there is no legitimate regime in Syria in the first place. ISIS’s murder of Western hostages was a legitimate legal excuse to launch the war considering the presence of an inept regime. Iran and Russia are angry, not because ISIS is being targeted but because they were neither included in the decision making process nor in the alliance’s formation.